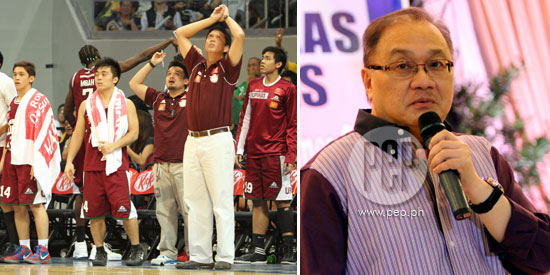 Businessman and sports patron Manny V. Pangilinan was invited to deliver a speech before the UP Alpha Sigma fraternity yesterday, October 10, for its 50th founding anniversary.

The TV5 chairman and CEO took this opportunity to express his fascination towards the unwavering support of the University of the Philippines community to the UP men’s basketball team despite its lackluster season.

In a report by Interaksyon.com, MVP was quoted as saying, “I’ve always been intrigued by that big school in Diliman, lying behind that naked man with outstretched arms—the school where tsinelas were in vogue before they became known as flip-flops, where the Pep Squad wins more championships than the basketball team.

“There are many things about the people and spirit of UP which impress me. Every time I watch your men’s basketball team, I say to myself: mukhang mababait naman sila.

“And with every heartbreaking game, I remind myself: napagod siguro kaka-rally.

The UP Fighting Maroons finished with only one win after fourteen games in the eliminations of the University Athletic Association of the Philippines (UAAP) men’s basketball tournament.

Following MVP’s fall out with alma mater Ateneo De Manila University (ADMU) over issues of mining and the Reproductive Health Bill, it isn’t hard to deduce that the Samahang Basketbol ng Pilipinas President may divert his support from one Katipunan-based team to the other.

At the said event, MVP, who is also the chairman of the Amateur Boxing Association of the Philippines, pledged P5 million for various projects at UP.

“I never had much to do with UP—but that situation could of course change,” he said.

MVP’s admiration for the university goes beyond basketball or sports. He also praised its academic program while citing the apparent lack of state subsidy.

“Whenever I visit UP, I think of what little government support you receive.

"I’ve seen some of the facilities and laboratories of your science and engineering programs—they’re good, but far from the best.

“I know how brilliant your professors are, but have some idea how much they’re paid.

"And I appreciate how limited the subsidy is for Iskolars ng Bayan.

“But pity is not what I feel when considering your professors or students.

"Instead, I wonder: How could an institution, funded so parsimoniously, graduate consistently impressive and committed people?

“UP has its battles with budgets, but I truly believe this—and this is a businessman talking—value for money, no university gives a greater return on the nation’s investment for its children than the State University.”

Read Next
Read More Stories About
Manny V. Pangilinan, UP, University of the Philippines
Post a Comment
Latest Stories