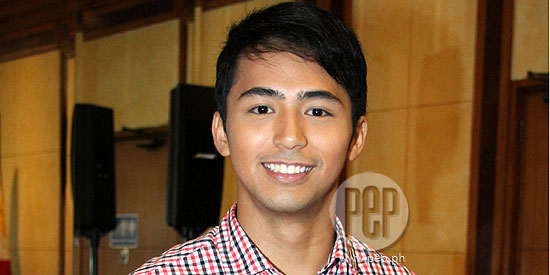 Three years into his showbiz career, Starstruck 5 winner Enzo Pineda confesses that being compared to his colleagues Rocco Nacino and Sarah Lahbati is the worst beating he got.

Enzo Pineda could not be any happier and grateful after he was offered to star in the upcoming GMA-7 soap, Kakambal ni Eliana.

Taking on a lead role is the break that the 22-year-old hunk has been waiting for since his foray into showbiz in the reality star search Starstruck 5 where he was hailed “First Prince.”

In a pocket press interview of the said teleserye, the charming Enzo eagerly told PEP.ph (Philippine Entertainment Portal): “This is my first lead role and I’m really proud of myself kasi hindi ko talaga in-expect na I could be a dramatic actor.”

Prior to this project, Enzo tried a handle in hosting in the showbiz talk show, Startalk. He has also been a regular performer in the Kapuso channel’s Sunday variety show, Party Pilipinas.

While he takes in pride in his hosting duties and being able to exhibit his dancing and rapping skills, Enzo used to think that he was not meant to act.

All this changed when his home network pushed him to participate in the “GMA League of Actors” workshop last year. He was chosen “Best Actor” among the first batch of participants.

The experience surprised him, yet convinced him that he could delve into acting.

“That made me think that I can do this, that I can be in drama. [And now], GMA gave me this opportunity now to prove myself,” beams Enzo.

FINDING HIS NICHE. Prior to being given his role in Kakambal ni Eliana, Enzo was confused about whether to be a performer or to be a dramatic actor.

“So, yung sinabi ko sa [sarili ko,] sa third year ko [ngayon], I want to be in drama. This is what I want to do, what I love doing,” said the Bench Body model who seems to have found his niche.

KAKAMBAL NI ELIANA. Enzo is currently deep into taping and attending workshops with his co-lead stars Kim Komatsu, who plays the leading lady, and with GMA teen actors Kristoffer Martin and Lexi Fernandez.

The actor relayed his impression of his leading lady who he gets to work with for the first time, “I’m happy na siya yung makakapartner ko dito. Nakita ko naman na sobrang sipag niya.

THE WORST INTRIGUE. As he enters his third year in showbiz, Enzo’s relatively young career has received its worst thrashing, (no) thanks to the intrigues that the GMA-7 talent has had to put up with.

He laughed it off, “Actually… madami!”

Asked what the worst is, so far, Enzo frankly answered, “Me being compared to my colleagues.”

By colleagues, Enzo refers to his Starstruck batchmates Rocco Nacino and Sarah Lahbati, who have both starred in their respective teleseryes and movie projects.

The actor continued, “I admit that some of my colleagues, which are some of my good friends, are, alam mo yun, nauuna sila sa akin.

“They’ve been given breaks before me, like two years ago pa!

Enzo clarified that his colleagues’ feats do not pressure him. He pointed out, “If I really want something, makukuha ko yun. Saka, iba naman yung career path namin. So, okay lang yun.”

Intrigues are part of the business, this Enzo has learned to accept.

“It’s not that you’re competing with them, di ba? Pero of course, nasasaktan ka because you know it’s not true.”

Not that the actor is expecting it, but how does he see himself handling future intrigues?