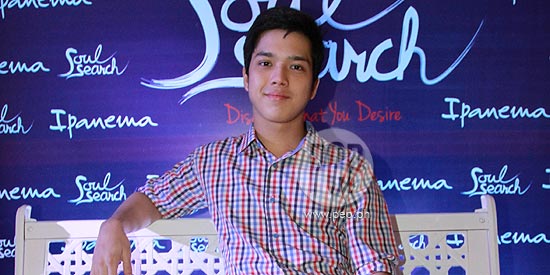 At the Soul Search event of Ipanema last night, August 13, we heard some girls giggled at the sight of Elmo Magalona.

And when PEP.ph (Philippine Entertainment Portal) put out his photo on the site’s Facebook, Twitter, and Instagram accounts, most of his fans cried that they miss seeing him perform.

For about three years, the son of Francis and Pia Magalona had been a staple in GMA-7’s variety shows—from S.O.P. to Party Pilipinas— every Sunday.

But come June, when Sunday All Stars was launched, Elmo was noticeably not part of any group: Ligang iLike, Tropang Trending, Tweet Hearts, and Insta Gang.

Elmo’s mom and manager Pia Magalona politely refused to say anything at the event.

For the young star’s part, he's been taking this break as an opportunity to “work on personal stuff.”

Elmo is presently a freshman at the De La Salle- College of Saint Benilde, and on the side, “Of course, I find time for my own music.”

Aside form his endorsement, “I’m going to stuff like these”— meaning, events— plus, “workshops.”

When is he going to be visible on TV again?

He said with a shy smile, “Okay lang…”

The topic shifter to his love life.

Believe it or not, despite the persistent rumors linking him to Lauren Young, Elmo claimed that he is “still single.”