TOP LIST: Celebrity couples who called it quits in 2013 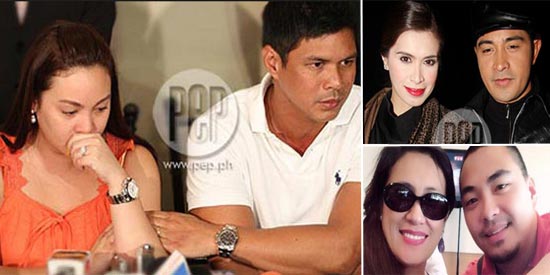 Celebrity couples Claudine Barretto and Raymart Santiago, Ai-Ai delas Alas and Jed Salang, and Sunshine Cruz and Cesar Montano are among the top showbiz personalities whose breakups rocked showbiz in 2013.

But unlike ordinary folk, these sorry conflicts make it to the headlines.

Maybe it is as they say: fame and fortune have a price.

The most celebrated breakup this year has been the bitter ending of the nine-year marriage of Raymart Santiago and Claudine Barretto.

Although not yet separated officially, the couple's multiple court cases against each other do not give much hope for their families, friends, and fans to see the two stars, once madly in love with each other, getting back again.

Claudine led the charge by asking the court for a Temporary Protection Order, followed by a Permanent Protection Order, against Raymart. She waved the Violation Against Women and their Children Act, or R.A. 9262, to get him.

Raymart, moving to get custody of their two children, accused Claudine of being a drug user and husband-beater.

As a preview of how messy and complex this marital problem has become, Claudine’s sister Gretchen and their brother J.J. have submitted affidavits on Raymart's behalf.

Claudine’s parents, meantime, remain steadfastly on Claudine's side and have hurled ugly words in the direction of their children Gretchen, J.J., and Marjorie.

Another item that turned into entertainment headline for several weeks is the breakup of Ai-Ai delas Alas with her non-showbiz husband Jed Salang.

The end of their relationship happened as fast as their wedding. On April 3, Ai-Ai and Jed surprised the public with their unceremonius—by showbiz standards—civil wedding in Las Vegas, Nevada.

On May 19, or just a little more than one month after the wedding, Ai-Ai appeared on The Buzz and, in a teary and distraught state, confirmed the end of her marriage.

She pointed to physical abuse and the presence of a third party as the reasons for their breakup.

She cited Violation of R.A. 9262 or Violence Against Women and their Children in her complaint against Jed, which is still pending in the courts.

In one of her later interviews, however, Ai-Ai said she is “starting to heal.”

Catching showbiz offguard is the split of Sunshine Cruz and Cesar Montano after 14 years of marriage.

Earlier, there had been buzz that Sunshine had had it with Cesar's "womanizing," but since this was the nth time a rumor about Sunshine catching Cesar cheating on her had surfaced, showbiz did not pay mind.

The wife, as usual, would forgive the husband.

But it was different this time.

The latest story of an extra-marital affair between her husband and starlet Krista Miller had Sunshine fleeing the house and stomping to court.