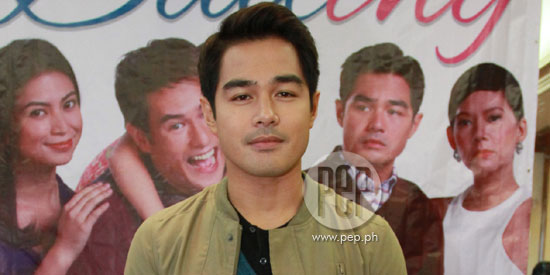 Despite being in several projects, Benjamin Alves won't pass up the chance to audition for a Cinemalaya movie. He says, “We’re very pampered sometimes, that we don’t get to audition. You’re very humbled being able to audition with everyone. Aktor ka talaga. And everyone has the same shot as you."

“Nakakatuwa, because talagang pinaghihirapan po namin as a cast and as a production."

“In real life, I don’t have a kid, iyon po yung pinaka-challenge dun.”

"Other than that, wala na kaming ibang napag-uusapan.”

Sabi ni Benjamin, “Not lately because I have taping. I haven’t gone to a training in a long time.”

“We get to see each other in training, that’s pretty much it.”

“I don’t know the implication of that!” sabay ngiti ni Benjamin.

“Pero if you're asking if we train together, yes.

“I don’t know about that... from training to that? Ang laking lead ‘yon po, e.

“From running and biking to… that’s a big lead. I wouldn’t connect that.

“And they’re always thinking the best for me as far as being their talent. So, I’m very thankful for that.

“And the reception of Dading is so successful, sayang naman.

Does he aim for lead roles also?

Sagot ni Benjamin, “I think, when it’s a possibility as an actor, you want to… in time.

“Sana po. But if it doesn’t happen... with me naman, every project that I get, I’ll do my best.

“And if that helps me get a project that’s a lead, it doesn’t really matter because I’m always being taken care of very well.

“Kung mangyari po iyon, good. If not, I know that I’m in good hands.”

Saad ni Benjamin, “I didn’t get to do Cinemalaya, but I’m doing a movie now with John Lloyd [Cruz] now and Jessy Mendiola.

"I can’t still say the title, but it’s with actors that I would never had a chance to work with.

And how is it working with John Lloyd and Jessy?

“Especially from a network that, you know, you wouldn’t have the chance to… unless you’re doing, like, Cinemalaya or other outfits.

“And Direk Chito is very precise.”

Sabi ng Kapuso actor, “I think with anything new, even in Dading, talagang may adjustment period, pero that was very short.”

“Read the script... I could imagine what they would bring on the table.

"So you just wanna be able to make sure that you do your homework.

“I’m sad nga because I wasn’t able to do any auditions.

“Kasi ano ‘yon, e, there’s a weekend of audition. I wanna make sure that I audition.

“I wanna make sure that I do that next year kasi sayang yung opportunity, e.

“Grabe, when I think of Rocco [Nacino, Nora's co-star in Hustisya] being in those movies, or my contemporaries in GMA being able to to do a film for Cinemalaya...

"Like, si Chynna being able to have two movies… Direk Ricky has three Cinemalaya movies.

“Nakakatuwa for them, but for me personally, nakakalungkot, because may opportunity to audition, e.

“The great thing about it is anybody can audition. So, you know, you’ll not gonna lose anything from it. Win-win siya.

"Kasi even if you don’t get anything, yung experience…

“You are an actor. And everyone has the same shot as you.

“And that’s a good feeling to have when you’re sometimes pampered.

"Because you’re getting breaks na a lot of very talented actors probably wouldn’t be able to get.”

Sagot niya, “At this point? I don’t think I should be choosy.

"Kahit ano po, mainstream or not.

“There are advantages kasi with mainstream, there’s a big distribution.

“But I guess there are also advantages in having the tag of indie.

"Most of them are my age, so the conversations that we have from the director to the production is different, parang kaibigan mo lang.

“So, that’s the experience I always get, I always enjoy with the indie scene, if you wanna say it that way.

“There are advantages in both, but at this point, having two years of acting, I'm not near to any position to say, 'I want this and I want that.'

“I’ll be happy with… I’ll accept everything that comes my way or every opportunity that I am able to perform.”