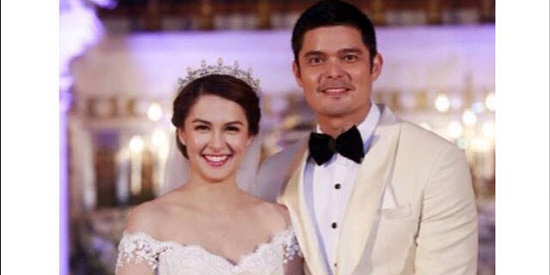 Dingdong Dantes and Marian Rivera capped the list of celebrity couples who exchanged I do's this 2014, including Bianca Gonzalez and JC Intal, Jericho Rosales and Kim Jones, Karylle and Yael Yuzon and more.

Celebrity weddings definitely count among the most unforgettable highlights of 2014.

Topping the list is the recently concluded nuptial of Dingdong Dantes and Marian Rivera at the Immaculate Conception Church in Cubao, Quezon City.

Marian was every bit the stunning bride as she walked down the aisle in her Michael Cinco gown.

She was accompanied by her parents Francisco Javier Gracia Alonso and Amalia Rivera.

Dingdong and Marian announced their engagement during the live episode of her self-titled Kapuso dance program last August 9.

In that same episode, Dingdong revealed that he first proposed to Marian during their vacation in Macau back in 2012.

It will be recalled that they officially admitted being in a relationship to YES! Magazine (February 2010 issue).

Held at Lagen Island in El Nido Palawan last December 3, only their closest family and friends witnessed the occasion.

The personalized details of the wedding made it more special even for the guests, who shared Instagram photos of their beach kit and newsletter that retraces the love story of JC and Bianca.

As seen in their wedding video teaser, Bianca made the right decision to do her own makeup because JC was obviously wowed by her refreshing look that day.

Other celebrity weddings that made headlines during the first half of 2014 were those of Jericho Rosales and Kim Jones; Drew Arellano and Iya Villania; Karylle and Yael Yuzon; Boots Anson-Roa and Atty. King Rodrigo, and Alwyn Uytingco and Jennica Garcia.

For the latter part of the year, more couples tied the knot—Amy Perez and Carlo Castillo; Joross and Katz Saga; Chito Miranda and Neri Naig; Aiza Seguerra and Liza Dindo, and Marcelito Pomoy and Joan Paraiso.

To view the photo gallery of celebrities who tied the knot this year, CLICK HERE.