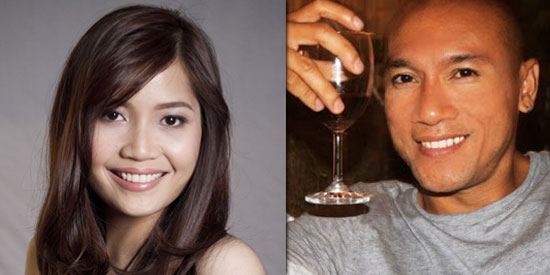 "Thank you to everyone who replied. This gives me the confidence to fight for my rights (as an actor and as a person).

"We never had a script so I did not have an idea what the scenes will demand from me, and details of what we're going to do until right before the take.

"I understand there is a degree of pain involved when playing these kinds of roles because I have played battered women roles before.

"I just never thought that the pain would come not from my co-actor during a scene but from the director.

"I believe that his act was uncalled for, and downright wrong.

"I strongly believe that looking after my own welfare, health and safety is not wrong, and that I am entitled to it as a person."

"That director is crazy and needs to be blacklisted. No sane director would ever subject his/her actors to this.

"In all staged fights (or anything that requires a fight director), safety should be the priority. It just needs to look real, not actually be real.

"As you know, Actor's Studio East teaches effective, yet healthy methods/approaches to acting.

"One thing we, nor should anyone condone, is violence in the workplace.

"It's one thing to show violence in a film with pulled punches & edits, but it's an entirely unacceptable to physically harm your scene partner &/or the actors working under you when you're serving as a director.

"A director's job is bring the actors together as a whole, to create a masterpiece by respecting the actor's abilities & their own, and to keep things moving forward as smoothly as possible.

"These are all difficult feats, but never so difficult for a trained director that one needs to inflict physical harm on one of their actors.

"It has come to our attention that a director known by Joselito 'Jay' Altarejos has does just that.

"He has physically abused a female actress we're quite familiar with, and then went on to slander her name as the 'most unprofessional actress' he has worked with to cover his own woman-beating ass!

"This is unacceptable & we hope to see the fullest extent of the law applied to this asshole.

"This is intolerable, and we cannot wait to see justice served.

"Producers, actors, and agents alike: do yourself a favor, and never work with this pig!

"There is nothing more degrading & dangerous than working with someone who thinks they're above the law.

"We greatly look forward to seeing this abuser get exactly what he deserves."

"No sane director would ever subject his/her actors to this.

"In all staged fights (or anything that requires a fight director), safety should be the priority. It just needs to look real, not actually be real."

Read: PEP EXCLUSIVE. Mike Tan breaks silence on issue with a director: "That was a very traumatic experience.”