Direk Joey Reyes to Poblacion Girl: "You have become the face of Omicron." 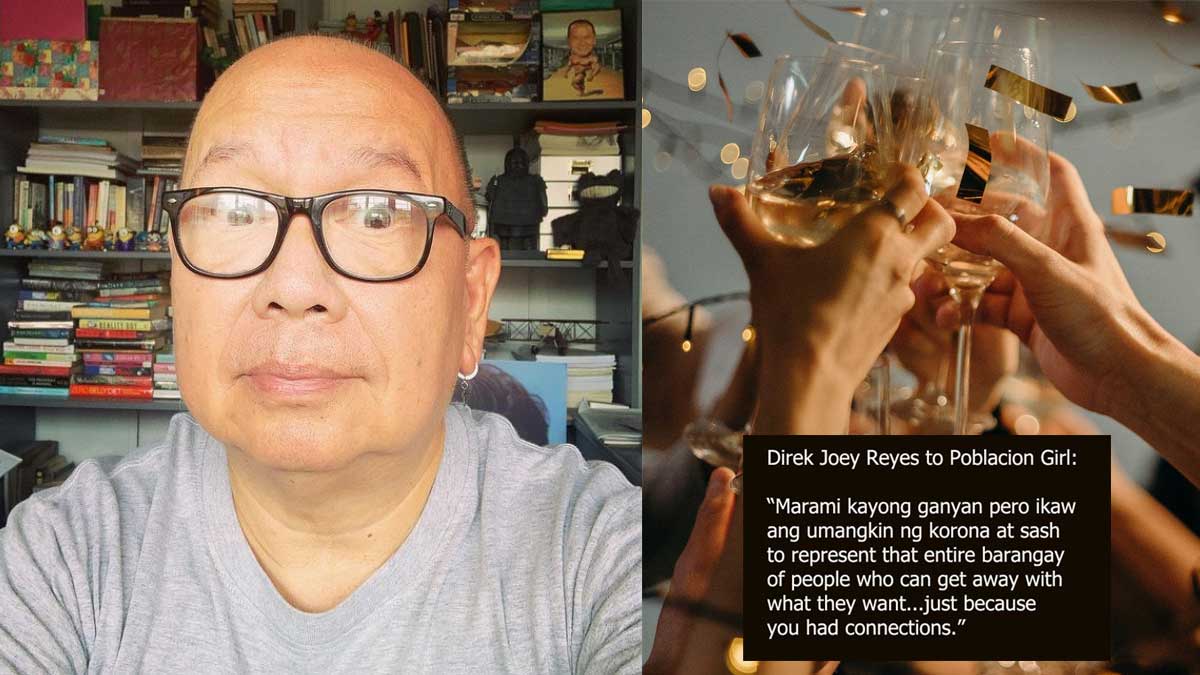 Tinagurian niyang "face of Omicron" si Poblacion Girl, na siya raw ang "umangkin ng korona at sash to represent that entire barangay of people who can get away with what they want including the violation of very important protocols just because you had connections."

We would have wanted a happier new year but hours before 2021 ended, the government announced that we are back to Level 3 alert because of the dangerous spike of the number of COVID19 cases in the country in a single day.

It is apparent now. The Omicron variant has come to town like a going-away present of the passing year.

Just when we thought that we were slowly (and hopefully surely) easing back to a kind of comfortable normal, here comes another possible surge.

And it is not going to be just another surge, Girl ... this is the most volatile and dangerous because the variant now plaguing the world boasts of the greatest transmissibility. You know what? I feel bad for you. Really. Why? Because you have become the face of Omicron.

What was merely an imaginary micro ball of protein spikes has found a face, a name. And it is all because you wanted to party and skip your quarantine. Because you had connections.

I feel bad because you are being blamed for the resurgence of cases—as well as being branded as the Mothership of Omicron.

You have practically been crowned Miss Omicron Philippines 2021—which is funny but unfair.

It is impossible that these massive infections could have come from you and you alone. I mean, if you can pay off your quarantine requirements because you have connections, I can imagine that others are doing it as well.

After gallavanting in the U.S. for a vacation, it would not have really been living hell to be locked up in a comfortable hotel room making sure that you did not bring home the virus together with your other imported goodies, right?

But you know what, Girl? I understand. If you were right there in the heart of rocking Makati, it must have sheer torture to know that your squad was just a few blocks away gulping down their Jack Daniels and Absoluts singing Jingle Bells.

It must have been intolerable to think that they are having fun together while you were confined in so many square meters of industrial carpeted room service operated prison. If only you realized the possible consequences of your actions and stopped thinking of some temporary pleasure just because you had connections, then maybe all these would not have happened.

According to accounts, you have succeeded in infecting a substantial number of your friends (you can have a recount after all have recovered to see how many of them would still want having you around) as well as the staff of the bar where you decided to boogie.

You can also start using your College of Business mathematics to estimate the exponential number of infections generated by your simple act of misbehavior. These friends went to their Christmas Eve and Christmas Day family reunions, presumably asymptomatic thereby opening the possibility of infection of all their family members as well as friends.

For about four days these people have gone around not knowing that they may be spreading the virus—endangering those with co-morbidities or senior members.

And, yes, Girl ... even the children because Omicron is vicious with unvaccinated kids. I am trying to understand what you did because you thought it was just another kakiyan to party with your friends.

I am trying to find any validation of the sheer irresponsibility of your act, its somewhat vulgar implications because you told your peers that you got out of quarantine because you had connections. Proud ka pa, Girl?

Now look at what you are being blamed for—even though it is unfair to point the finger only at you.

Marami kayong ganyan pero ikaw ang umangkin ng korona at sash to represent that entire barangay of people who can get away with what they want including the violation of very important protocols just because you had connections.

But it is the connected people like you, Girl ... and these more guilty individuals and institutions who enable people like you who should be answerable to the laws of the land. Because of the possibility of a surge, everything falls two steps back again.

Plans for hybrid classes may be postponed ... again because of the highest transmissibility of the variant.

Restaurants, recreation venues and cinemas are cut back to 30% occupancy and the NCR—which has already been a safe bubble because of the high degree of vaccination—has deteriorated into another potential danger zone.

Just when the economy is slowly picking up ... this had to happen all over again.

All because there are others like you who do not take the protocols seriously...and only think of yourselves and the momentary pleasures that provoke reckless decisions.

All because there are other persons, businesses, and institutions that allow such recklessness, corruption and irresponsibility to take place with a corresponding amount of money or delicious favors.

Regardless of how hard the government tries—or how much work our health workers yield, it is people like you who just ... uh, screw up everything because you don't give a f--k.

I feel bad for you because this stigma will stick to your name for the rest of your life.

You will always be the face of a virus.

I feel bad for your parents because they too must carry the burden of being accountable for some decisions you made which they were not aware nor could be held responsible.

I feel bad for your friends (some of who are the children of my students in the University long ago) because they will carry the guilt of exposing their friends and family members to the virus just because they happen to be your friends.

I feel bad because I wish you had ... in your heart of hearts ... embodied the values that the University wanted to impart to all its students and graduates: the importance of social responsibility and thinking beyond one's impulsive needs to care for the welfare of others.

I feel bad for you, Girl. But you—together with your enablers—must face the consequences of the law of this land. Happy New Year.

Berjaya Makati Hotel (The Berjaya) confirms the recent reports concerning one of the guests who violated government imposed quarantine protocols by prematurely departing from quarantine before having been tested.

She was reported to have attended a party. She eventually turned up Covid-positive, as well as some of the people she partied with.

Although she and her friends are reportedly only mildly symptomatic or asymptomatic, this was a very serious breach given the pandemic’s disastrous impact on lives and livelihood. Any employee found errant by commission or omission will be dealt with severely to deter a repeat of what happened.

The Berjaya strives to be fully compliant with the government’s rules and protocols against the spread of COVID-19 virus and to be part of the unified and national barrier to keep the virus at bay.

The Management sincerely apologizes for failing to stop the guest from jumping her quarantine.

This was the only incident of its kind in the nearly two years that we have served as a quarantine hotel, and we will make sure that it is the last.

We can only make up for it by being an exemplar of compliance moving forward.

For now, we are fully cooperating with all government agencies that are conducting their own investigations. The Berjaya prays for a better new year for everyone.