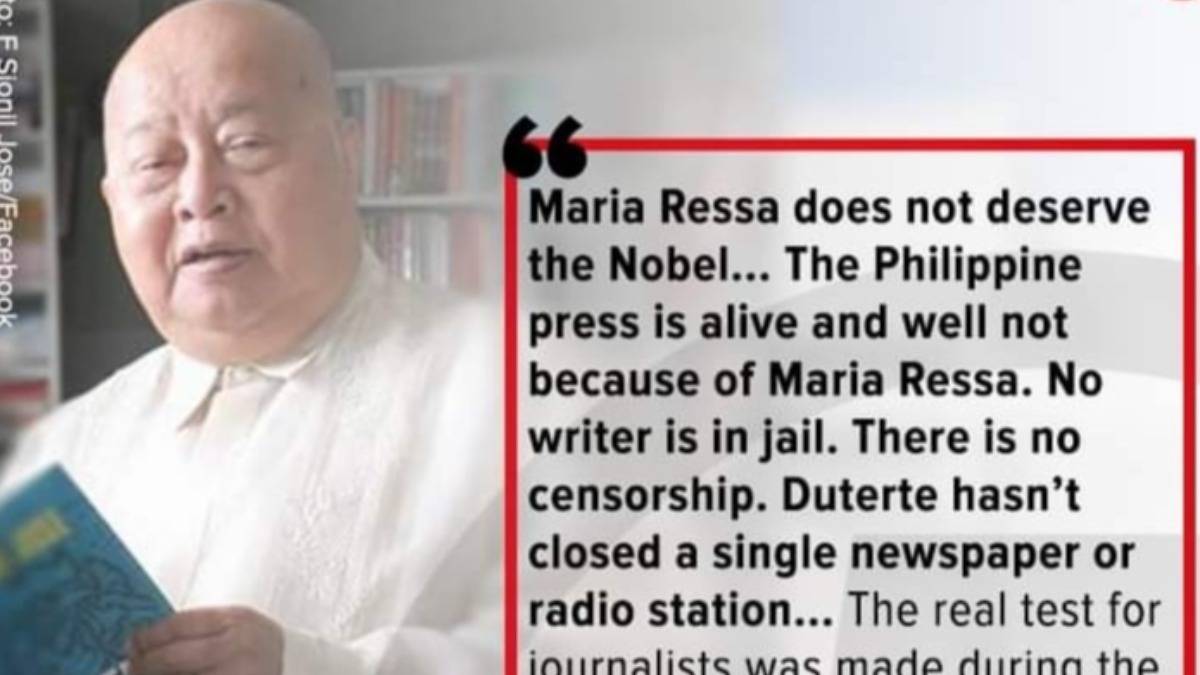 “Maria Ressa does not deserve the Nobel.”

Paliwanag ni F. Sionil Jose, “I will be damned for stating this. Sourgrapes, etc. because I was in the listing of possible Nobel literary prize winners as published in international media.

“I have criticized Duterte but not on press freedom. The Philippine press is alive and well not because of Maria Ressa.

“No writer is in jail. There is no censorship. Duterte hasn’t closed a single newspaper or radio station.

“The closure of ABS-CBN was made by Congress which did not renew the ABS-CBN franchise. Sure, he influenced Congress but the real issue against ABS-CBN as I have pointed out is not press freedom but money, politics, power and its abuse by the Lopezes who own the TV network.

“Sure, journalists have been killed in the Duterte regime just as it was in past administrations. But those killings cannot be laid at Duterte’s door. Usually, they are made by minor politicians or officials attacked by journalists.

“The real test for journalists was made during the Marcos dictatorship when he imposed censorship, closed all media and jailed journalists.

“Now, let us look at Maria Ressa’s credentials. The most important is she worked with CNN. I haven’t read anything memorable by her.

“She had developed important connections as this award has shown and was able to get foreign support for Rappler.

“Duterte was not serious with Maria Ressa, else he could have nailed her like he did with Chief Justice Maria Lourdes Sereno and Senator Leila de Lima.

“For sure, we always had great journalists who fought Marcos, among them the late Letty Jimenez Magsanoc and Betty Go, Eggie Duran Apostol (RM awardee), Sheila Coronel (RM awardee), Marites Vitug and Chi-Chi Lazaro on TV.

“Those Nobel judges were taken for a ride by western media hype.”

“I would expect nothing less from someone, who vehemently and shamelessly supports a divisive WARLORD.

“And yes, you are right.

“How sad that he had to include his resumé just to stroke a battered ego for not having been deemed worthy or accomplished enough to win the Nobel Prize for Literature that he has always longed for.

“It has also become apparent through this status post that Mr. Jose is living in a parallel Philippines. He is divorced from reality.”

“But he goes beyond that to deny the damage Duterte has done to our institutions and freedoms, despite his own mention of three prime examples — the closure of ABS-CBN at the instigation of a rubber-stamp House, the unseating of Chief Justice Sereno on dubious grounds, and the jailing of Senator de Lima on trumped-up charges.

“I have kept my views on Sionil Jose’s intellectual degeneration to myself and within intimate Viber groups, out of respect (and who was I, really, to pass judgement on a titan?). At the Varsitarian, where I became editor in chief, I felt unworthy occupying the post he once held.

“Sadly I can no longer hold him up to students as a role model. At 96, he could be using his lucidity and sharp pen to educate young readers and writers. Instead, he’s become just a bitter, angry writer fast fading into irrelevance.”

“Your books are hard to finish. Your dialog is stilted and unrealistic. Even your columns contain little to no insight. But I like your bookstore.”

“Let me explain this to you in simple words.

“The journalist won because she stood up to a monster. And you're the bystander cheering on the monster.

“The monster isn't the worst villain in this tale. It's the spectators, applauding as the blood spills.