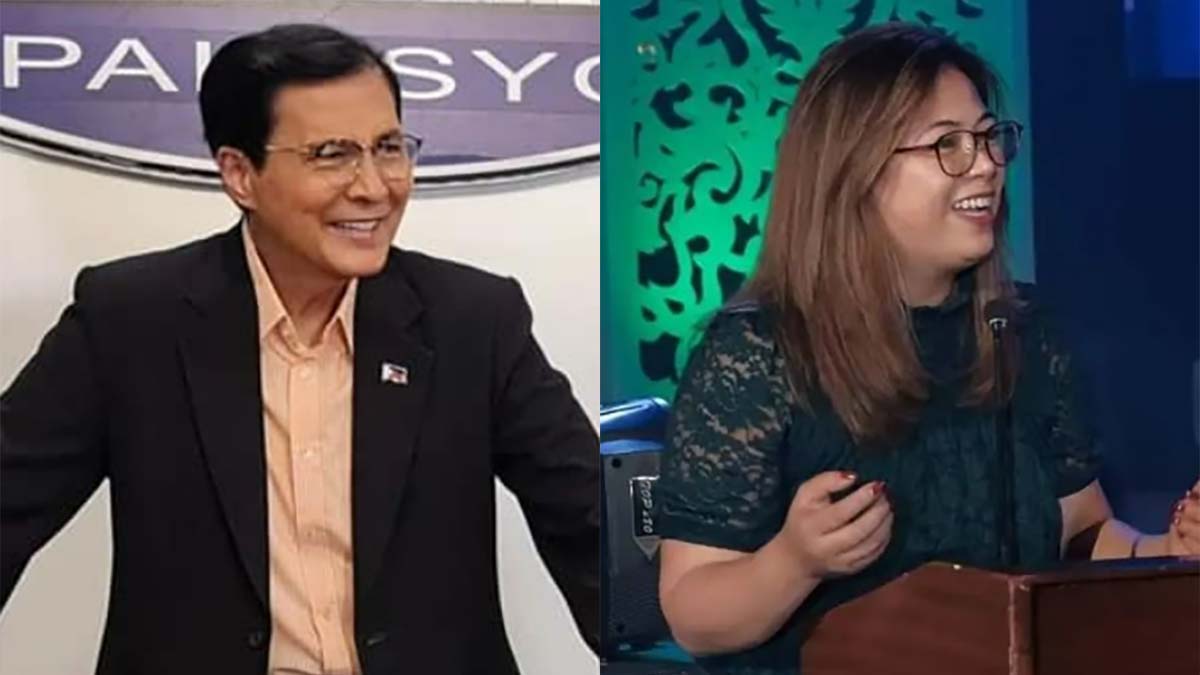 Liza Diño on Tirso Cruz III as incoming FDCP chairperson: "I personally welcome the appointment of Kuya Pip as the new Chairman of the agency and hope that he continues the programs that we have started and takes these initiatives to new heights."
PHOTO/S: Instagram

Hinaing ni Direk Avid sa Facebook, “This is horribly inefficient. Assuming the incoming chairperson is the most experienced person in the world to lead the agency, the shift is so abrupt it is certain to put a lot of great ONGOING programs in danger of being buried in a bureaucratic mess.

“Before Chair Liza Diño-Seguerra's term, the Film Development Council Of The Philippines did not even have Animation under it's mandate. Under her leadership programs were created in support of both the huge service work providers & the tiny original animation creators like us. “

There were workshops, market participations & most importantly, financial support. Newbies & old timers all had access to these programs they created.

“At the height of the pandemic, while other cultural agencies could not reroute their budgets to help their constituentss due to red tape, FDCP was quick to formulate financial aid & vaccine drives for film workers, and they even expanded it to those who work in the live events scene & Komiks.

“Chair Liza understands that films are made by workers, not just actors & auteurs. I can only hope that the next chairperson does too.”

Paglilinaw ni Cruz-Angeles, “I had earlier mentioned that she might fall under MC 1. However upon clarification with Ms. Diño, the circumstances are as follows:

“Under RA 9167 the chairman and CEO has a term of three years, unless removed by the President.

“Ms. Diño was reappointed by President Duterte and was serving a second term when President Ferdinand Marcos Jr. exercised his power to remove the current chair and appoint a new one.

“However, while Tirso Cruz III’s documents are pending, Ms. Diño remains in a holdover capacity.” 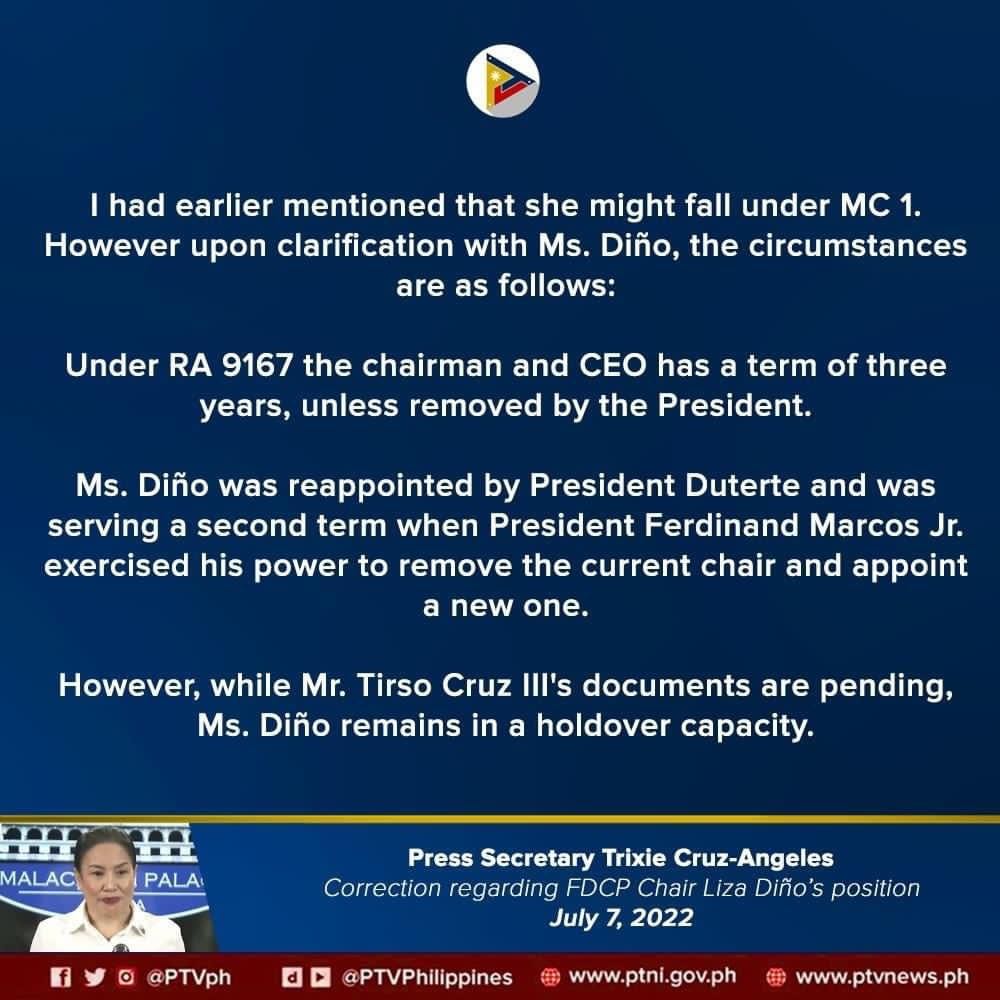 “Incumbent FDCP Chairperson Mary Liza Diño was called to Malacañang yesterday, July 6, 2022, by the Office of Executive Secretary to discuss the appointment of incoming FDCP Chairman Tirso Cruz III as the new head of the agency.

“In the meeting, she was instructed to continue to perform her duties as Chairperson and CEO in a hold-over capacity to ensure the continuity of the agency’s operations while waiting for the release of the official appointment documents of the incoming Chairman.

“Furthermore, Madam Diño and Mister Cruz have already talked and discussed details regarding the turnover process to ensure a smooth transition of the agency and the duties thereof.

“‘I personally welcome the appointment of Kuya Pip as the new Chairman of the agency and hope that he continues the programs that we have started and takes these initiatives to new heights.

“‘Kuya Pip will be blessed with the most hardworking, passionate, and dedicated teams of FDCP who are ready to rally behind him in further support and to champion Philippine Cinema and the industry,’ Diño said.

“The agency thanks the industry and the general public for the support that it received during the term of Chair Diño, and requests their ardent and full support of the incoming Chairmanship.” 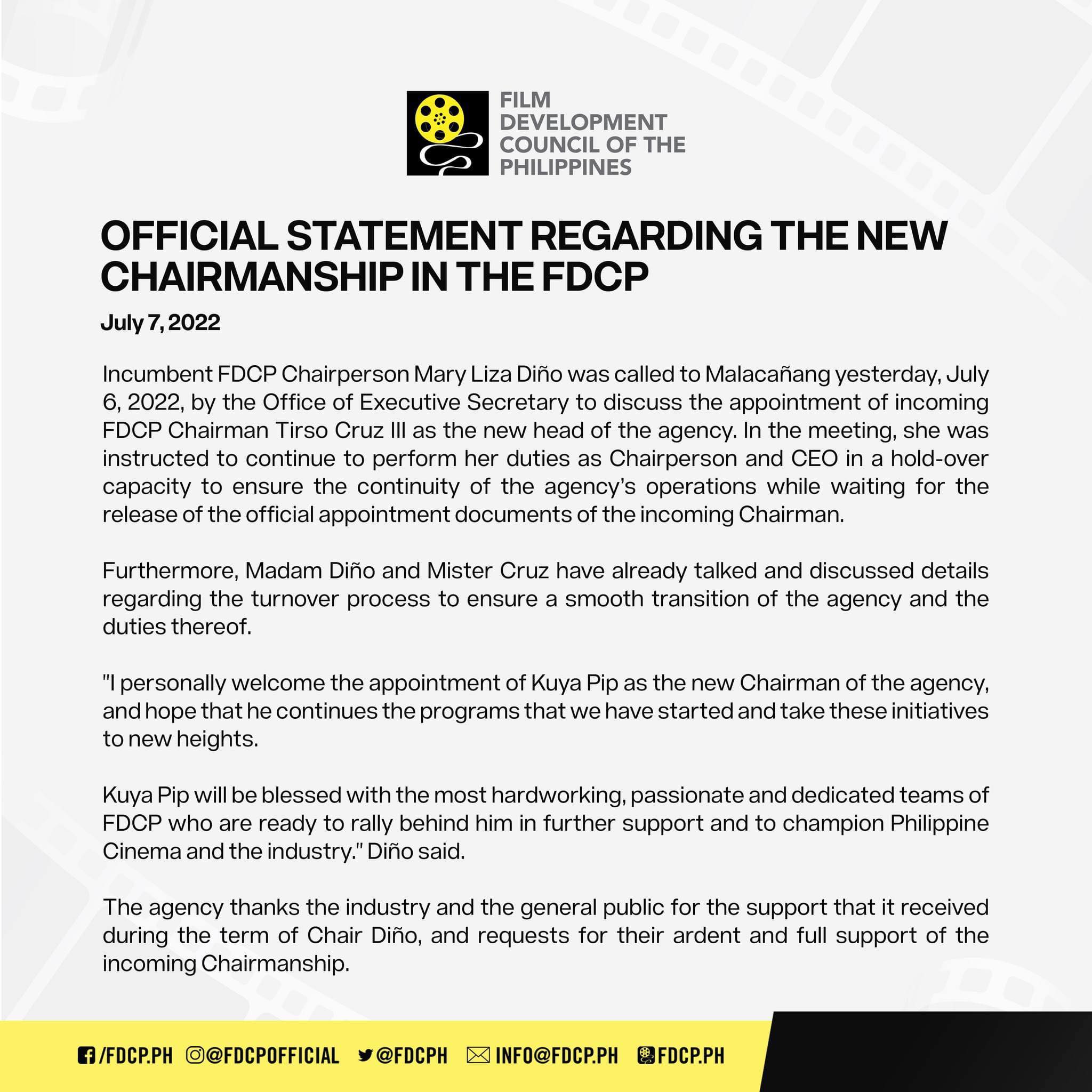 Bahagi ng Facebook post ng NCCA nitong Huwebes, “The current chairman of the National Historical Commission of the Philippines (NHCP), Dr. Rene R. Escalante was elected as chairman during the Board of Commissioners meeting held today, 7 July 2022, at the Metropolitan Theatre.

“The board meeting of the NCCA was called for after Cultural Center of the Philippines president and concurrent NCCA chairman Arsenio ‘Nick’ Lizaso recently resigned. Dr. Escalante will be serving as Chairman of NCCA for the remaining six months 2022.

“Dr. Escalante is a professor of history and a former chair of the Department of History of De La Salle University Manila. He earned his baccalaureate degree from St. Camillus College Seminary and his master's degree from the Ateneo de Manila University.

“In 2001, he received his doctorate degree in History from the University of the Philippines in Diliman.

“Dr. Escalante is also a well-published academic. Among his books are The American Friar Lands Policy: Its Framers, Context and Beneficiaries (2002); The Bearer of Pax Americana: The Philippine Career of William H. Taft (2007) and History of Hacienda de Imus (2013).

“He was secretary of NCCA National Committee on Historical Research (NCHR) from 2004 to 2007 and was head of the NCHR from 2008-2010. He was also appointed as member of the Commission on Higher Education (CHED) Technical Panel on history, serving from 2015 to 2016. 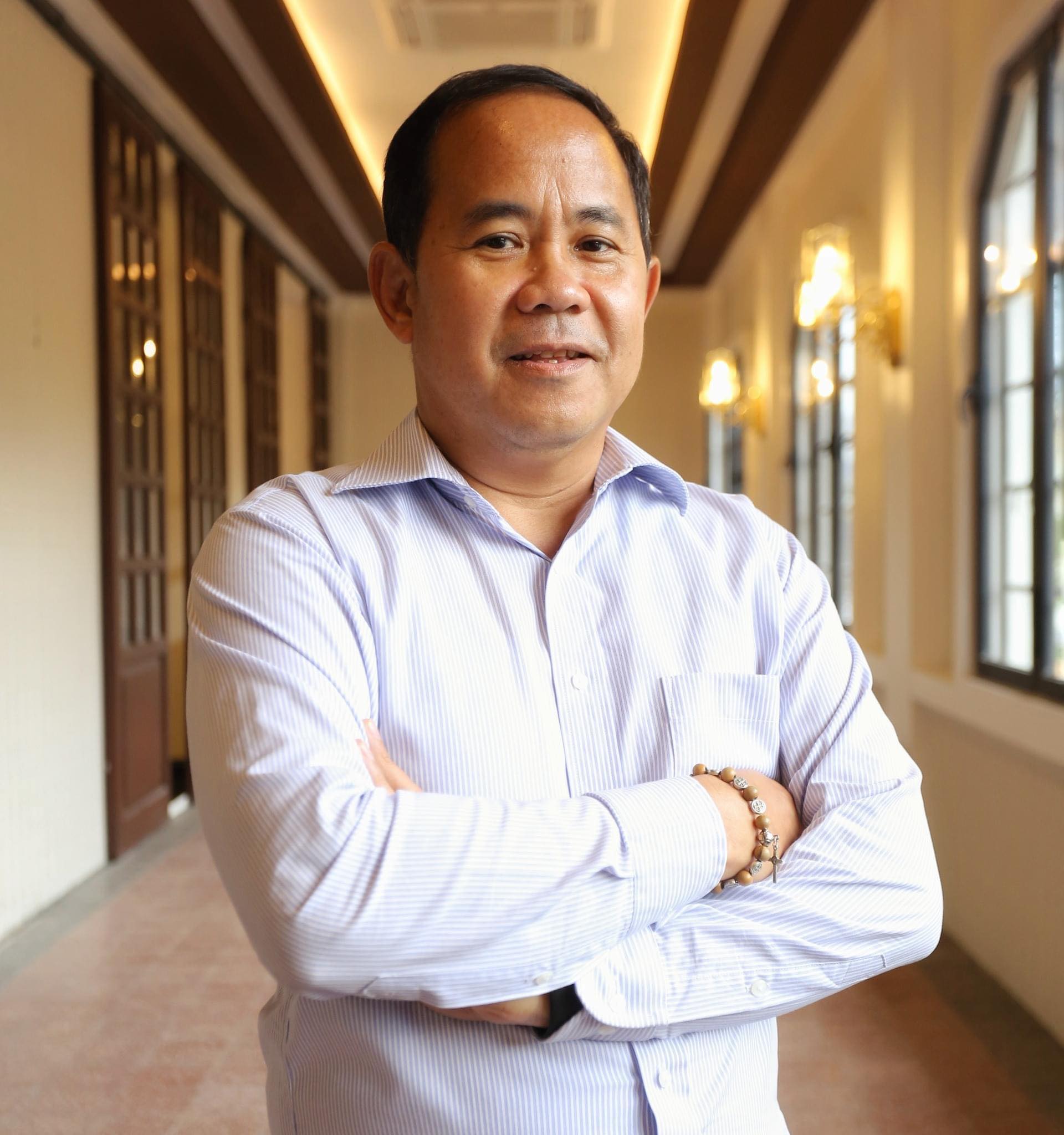