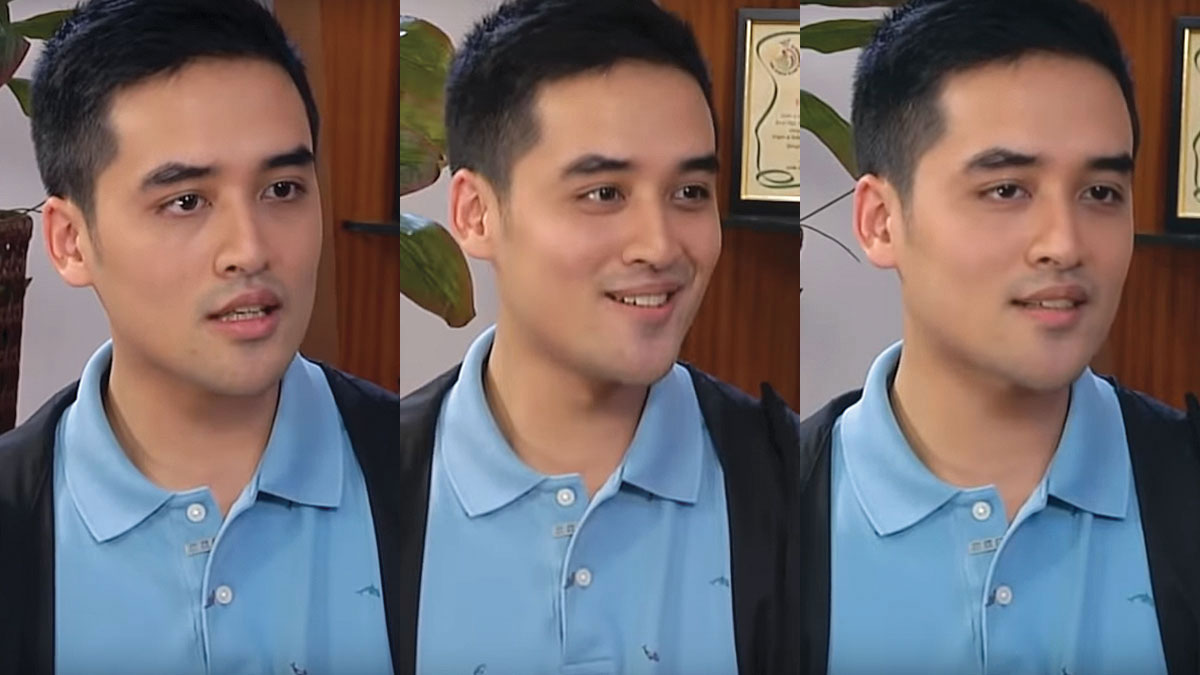 Vico Sotto is making his own mark, but not in the industry that his famous parents, Vic Sotto and Coney Reyes, have been thriving in.
PHOTO/S: Photos grabbed from GMA Public Affairs YouTube

A little past one o’clock in the afternoon, a tall, lanky, good-looking young man carefully pushes the glass door open and lets himself inside the photo studio.

After surveying the room and noticing that all eyes are on him, his thin lips form into an awkward smile. He then takes a few tentative but reassuring steps toward the people in the studio and introduces himself.

“Hi, Vico Sotto po,” he says, extending his right hand to shake hands with everyone from the YES! team.

As the English saying goes, the apple doesn’t fall far from the tree. In other words, to change metaphors, the 27-year-old Vico Sotto is a chip off the old block. He looks, moves, and sounds very much like his father, ace comedian Vic Sotto. Like father, like son.

In the next four hours, the YES! team learns a number of things about Vico: how similar and yet how different he is from his father Vic, how his unconventional family setup shaped his childhood, how he transitioned from being a painfully shy fellow into an optimistic and promising city councilor of Pasig City.

Born on June 17, 1989, Vico Sotto knew early on about his family’s unconventional setup.

“Si Mama kasi never minced her words, e,” Vico says. He recalls that “from a very young age, I don’t even remember what age,” he learned about his parents’ separation from his mother (whom he calls Mama and Mommy). “She would talk about it normally. So never ko inisip na ‘Bakit ganyan?’ Bakit hiwalay ang parents ko? Bakit si Mama lang ang kasama ko?’”

Vico, whose name is a combination of “Vi” from Vic and “Co” from Coney, didn’t resent the fact that his parents lived in different houses. In fact, Vico remembers that his mom would sometimes even wonder why he didn’t make a fuss about it when he was growing up. 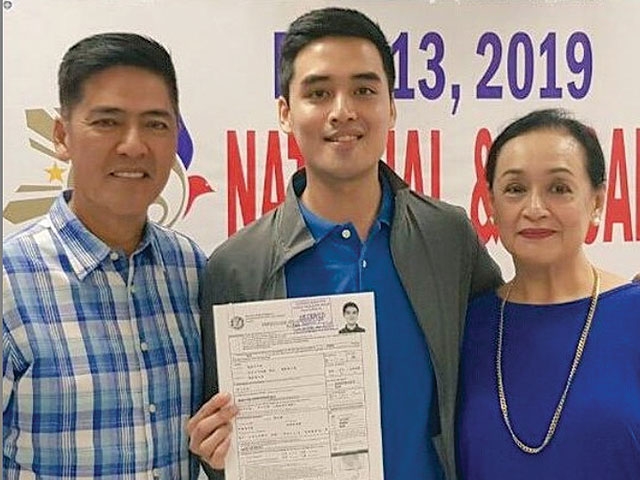 "Sabi ko, ‘Oo nga, ’no?’ Hindi, parang wala. Hindi ko naisip. I guess credit it to my mom. We would talk about it very openly kung ano ’yong nangyari in the past, kung ano ’yong good, ano ’yong mistakes.”

Keeping the communication lines open with his dad and his half-siblings made all the difference in Vico’s childhood. He never felt alone, nor did he feel any different whenever he was in the company of his half-siblings.

“Growing up, we would always have dinner every Saturday,” Vico remembers. “Walang paltos ’yan talaga. But of course, pag may work, minsan hindi.”

Admittedly, Vico tells YES!, while Vic Sotto's kids were quite content with their setup, there were also “selosan” moments among them. But those moments were never reason enough to keep Vico from establishing a strong bond with his brothers and sisters as they all got older.

“Siyempre, oo naman, may selosan no’ng kids kami. Siyempre, three mothers, e. But as we got older, we became closer to each other.

Perhaps another reason Vico was able to enjoy a normal childhood was because of his parents. Even though their relationship ended, Vic and Coney managed to maintain a level of civility and respect for each other as little Vico was growing up.

Having famous parents, however, has its pros and cons.

In a good way or in a bad way?

“Both,” Vico answers. “It’s hard for me to say this is good, this is bad. Basta iba lang.

Being a painfully shy kid, Vico didn’t enjoy the attention.

The good thing about the unsolicited attention was that it made Vico more conscious of his behavior and image in school. It kept him out of trouble.

“That’s true,” he says. “At the back of my mind, laging iniisip ko na baka what I do will be a reflection on my parents. So, there’s always that.

"Kumbaga, they worked so hard to maintain their good name. So, I want to do what I can nang hindi naman sila mapahamak nang dahil sa akin.”

As a student, he was “just average na may pagka-nerd,” Vico tells YES!

With a laugh, he adds that he was the type that easily got distracted from schoolwork.

“Hindi ako bumabagsak or anything like that. Average lang.

And what were those topics that easily took his attention away from his school assignments?

Vico, however, didn’t bury his head in books. He was also interested in basketball.

“No’ng college, yes, I liked playing basketball,” says Vico, whose long-limbed 6-foot-1 frame could pass off as a basketball player’s.

For a time, Vico also dabbled in digital editing.

"Medyo uso pa ’yong mga digital editing no’n. Nahilig ako for a while, pero after that, well, it goes back to what I want.

Little did Vico know that this interest in governance and politics would lay the foundations for his political future.

Vico’s foray into politics was not a spur-of-the-moment thing. Not many are aware of the fact that Vico’s interest in public service developed early on in life.

“My kuya sa mother’s side, si Kuya LA Mumar, who’s eleven years older than me, was a Developmental Studies major.

Even if the scholarly terminology that his Kuya LA uttered would just fly over his little head, Vico nonetheless found himself engrossed in whatever topic his Kuya LA chose to discuss with him.

“Kaya ako nahilig talaga was because of him. I’m interested in it, pero I was very hesitant na ako ’yong tatakbo.

Vico’s first brush with real-world politics and public service came in 2013, when he became part of the legislative staff of the Sangguniang Panlungsod ng Quezon (Quezon City Council).

It was a great learning experience for Vico. He got exposed to a variety of realities, including the good and the bad side of local politics.

“It certainly was a helpful experience, even though it was a different city,” he recalls. “You’d see how things work, especially behind the scenes. 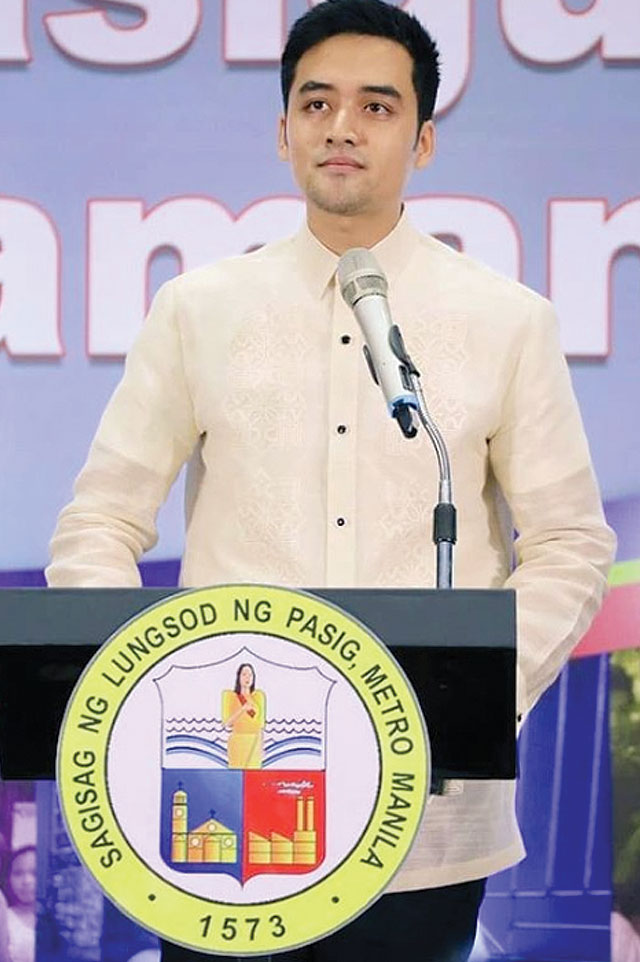 Three years into the job, Vico realized it was time for him to move on. He felt that he had nothing left to offer. His heart was simply no longer in it.

Part of him wanted to inspire change and forge on, but another part of him was already turned off by the messy side of public service. He resigned from the job in January 2015.

Looking back, Vico reveals to YES! that during his time as a legislative staff officer, there were days when doubts would creep in and make him question his own intentions and abilities.

Without going into specifics, he says that he felt as though he was dealing with numerous roadblocks that could not be moved.

“There are times na when I wake up, parang medyo disillusioned ako. ‘May nagagawa ba talaga ako?’ I want to change things. I have this idea, pero paano ba dapat ang good governance?”

Vico eventually learned to manage those self-deflating thoughts. He has accepted that changing an old and established system may be difficult, but it is not entirely impossible.

“At the end of the day, you have to realize na lahat naman ng countries, pati mga countries na we look up to now na mga developed countries, they all went through messy times.

"So, for me, that’s a source of encouragement na gano’n din sila dati pero they’ve improved. Tayo, we’re on the right track, I think.”

In August 2015, shortly after ending his stint in the Sangguniang Panlungsod ng Quezon, Vico got on board Government Watch (G-Watch) and Political Democracy and Reforms, programs of the Ateneo School of Government (ASoG).

On the official website of the Ateneo de Manila University (www.ateneo.edu. ph), Government Watch or G-Watch is identified as an “action research program of the ASoG that specializes in expenditure-tracking and monitoring government agencies’ program implementation.”

Established by the Ateneo and the United Nations Development Programme in 2000, G-Watch was created “in response to the plethora of reports on corruption and inefficiency in the government” and was “conceived along the principle of prevention through systems reform, and, ultimately, the institutionalization of these reforms.”

In his Facebook post on October 17, 2015, Vico said that his stint at G-Watch made him realize that there was still hope for good and clean government in the Philippines.

He wrote: “G-Watch is around 15 years old and the veterans there often recount how in the earlier years, government agencies were very resistant in forming partnerships with them—perhaps they were more fearful of increased transparency and accountability. Now, government offices seem to be more responsive and cooperative, generally speaking. This is just one among many signs that we are improving.”

His positive experience at G-Watch eventually led to his filing—in October 2015, just two hours before the deadline—of his certificate of candidacy for the position of city councilor in the first district of Pasig City. Admittedly, there were fears and doubts and hesitation on his part at the time.

“Hindi naman mawawala ’yong fears at saka doubts,” he recalls. “But ako naman kasi, I’m the type of person na I’ll do what I can, I’ll do my best, I’ll give it everything I have. Whatever happens, ’yon na ’yon.”

Amid his fears and doubts, Vico was determined to give it his all.

“My biggest fear? I’d like to think wala akong fear pag gano’n, kasi for me, what’s the worst thing that could happen? I’ll fail? I’ll lose an election? In the grand scheme of things, these things don’t really matter.”

Vico took courage in the fact that, win or lose, he would always have a supportive family to go back to, no matter what.

He says, “What matters to me more is okey kami ng family ko, nagmamahalan kami. We’re there for each other. I know na kahit na, let’s say, next elections natalo ako, I may not even run, I’ll be fine.

Had his bid been unsuccessful, Vico says he would still have pursued a post in the government, “Basta gusto ko mag-work in government.

"For me, hindi ko goal maging councilor or whatever public position. Ang goal ko is maybe to make an impact in government.”

Fortunately, Vico became victorious in his bid for a seat in the Pasig City council. Last May 9, the 26-year-old Vico became the youngest councilor of Pasig.

“’Yong first step do’n, kumbaga, is ‘how can someone participate if he or she has no information?’

"So for me, ang pinaka-importante now, first step ko, is to make ordinances, ’yong mga local na batas, that will enable people to get information faster.

Vico believes that his term will not be a walk in the park. He knows that he will encounter hurdles that will test his patience, his resolve, his street smarts.

Vico is ready to take on those challenges. But he doesn’t want to look too far ahead, saying, “Mahirap isipin, kasi three years is infinity in politics. Many things are gonna happen.

"Ako, whether I decide to run or not after my first term, I know I can make an impact. I want to focus on my three years first. 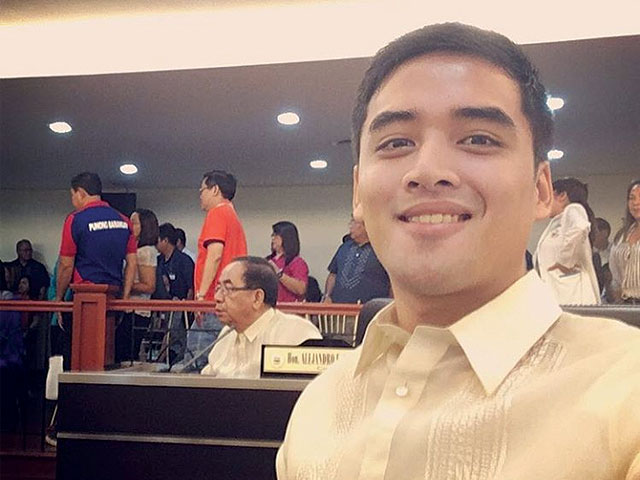 His being a neophyte should give Vico more courage to take huge risks and make bold steps.

"Ang dami talagang puwedeng gawin, which is a matter of breaking mindsets.

Vico Sotto has spent most of his young life in the shadows of his famous parents, staying away from the public eye as much as he possibly could. The time has come for him to embrace the spotlight. This kind of spotlight is very different from what his parents had during their younger years. But Vico Sotto, who is starting to fly, is embracing it as his.

On June 30, 2019, Vico Sotto, 29, was proclaimed as the mayor of Pasig City, making him the youngest winning mayoral candidate in Metro Manila.