Maricel Soriano Biography: The Making of the Diamond Star 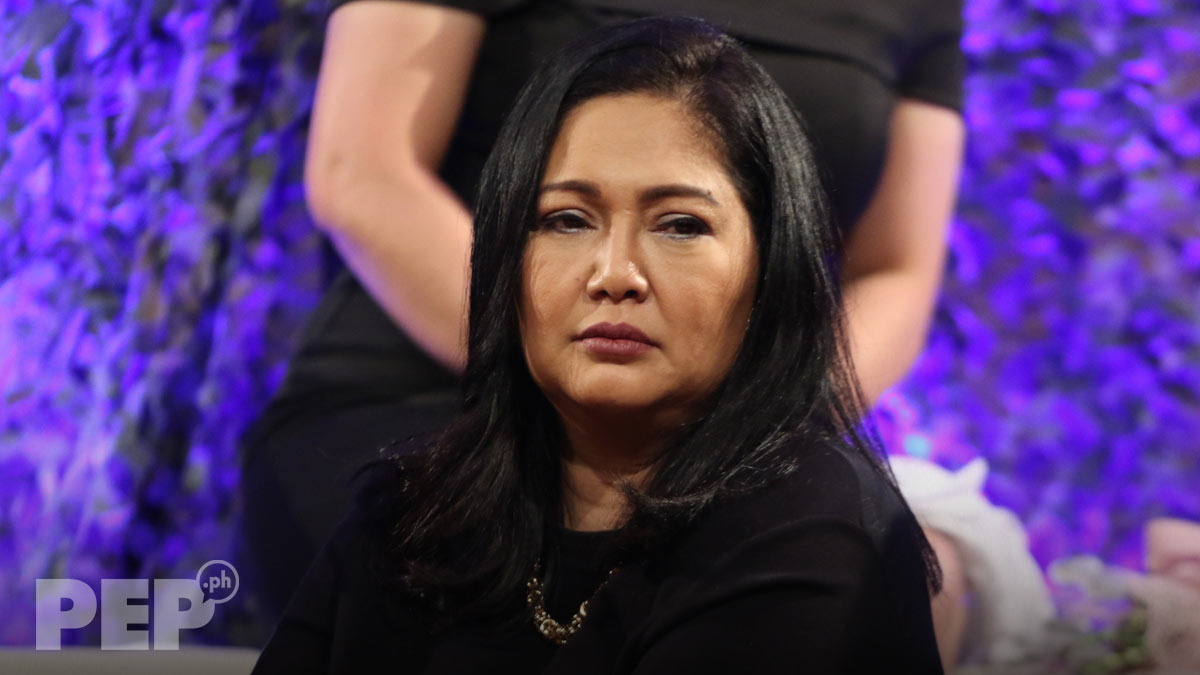 PEP.ph looks back on the colorful career of Maricel Soriano, the Diamond Star and Taray Queen of Philippine showbiz.
PHOTO/S: Noel Orsal

Diamond Star Maricel Soriano’s achievements as a movie and TV actress in both comedy and drama are now etched in showbiz history and in the hearts of her loyal fans.

Maricel looked back on her childhood when she guest starred in the ABS-CBN morning talk show Magandang Buhay in February 2019 to celebrate her 54th birthday and promote the TV drama series, The General’s Daughter.

The Kapamilya teleserye, which was top-billed by Angel Locsin, ended its nine-month run last October 4.

Maricel broke into a wide grin as she continued with her story. “Bata pa ako noon, as in six years old. Nakatira talaga ako sa mommy ko sa Kamuning,” she said, referring to the residential district in Quezon City.

She explained that her parents had already separated by then. While her mother Linda Dador lived in Kamuning, her father Victor Soriano stayed in Makati City.

Maricel grew up with her mother Linda and stepfather Boyong Martinez, who are now both deceased.

Had she pushed through with the screen name Maricel Martinez, the actress pointed out that her love team with William Martinez wouldn’t have happened.

Maricel was born Maria Celia Dador Soriano on February 25, 1965 to Victor Soriano, a jeepney driver, and Linda Dador, a housewife. She has an elder sister, Bec-Bec Soriano (mother of actress Meryll Soriano), and two younger brothers, plus half-siblings, including entrepreneur Mykee Martinez and actor Mel Martinez.

At the tender age of six, Maricel joined the acting profession as it was the only way she knew to earn money for her family.

Maricel was cast in the 1971 movie, My Heart Belongs to Daddy, starring Snooky, who was then the top child actress.

Other cast members included veteran stars Norma Blancaflor and Aurora Salve, as well as Tirso Cruz III, who was then a teen singing idol.

Maricel recalled being in awe of Snooky, the mestiza daughter of Sampaguita stars Mila Ocampo and Von Serna.

When Magandang Buhay co-host Karla Estrada commented that Maricel was “tomboyish” and didn’t need too much girly stuff anyway, Maricel made no attempt to rationalize her pitiful situation back then.

Going back to the story about her first movie, Maricel said she played a younger sister to Tirso, whom she now fondly calls “ang aking lolo.”

She added that the director was Mar S. Torres, and she felt so blessed at that time.

Asked to name her showbiz idols, Maricel had only one unanimous choice: Dolphy, the acknowledged King of Comedy.

"Sumasali ako sa mga pelikula ng Daddy ko,” she said, calling the now deceased comedian just like she did when she played his daughter in the iconic sitcom, John en Marsha (1973-1990).

She mentioned the 1977 movie, Omeng Satanasia, as an example, and shared a sample of their usual banter.

Maricel is the recipient of the Dolphy Memorial Award given out during the 67th FAMAS Gabi ng Parangal on April 28, 2019 at the Meralco Theater in Pasig City.

In her acceptance speech, the actress recounted how she found her way into Dolphy’s life.

Maricel also expressed gratitude for finding her niche in comedy, despite exploring other genres, like drama, horror, and fantasy.

FROM CHILD PERFORMER TO TEEN STAR

Aside from working in John en Marsha, which spawned several movie spinoffs, and other Dolphy productions, Maricel starred in the youth-oriented TV program Kaluskos Musmos, which started airing in 1984.

Maricel was joined by that generation’s popular young stars among whom were Herbert Bautista, Dranreb Belleza, and Maila Gumila.

In 1980, Maricel was signed up by Regal Films and became part of the movie production company’s pioneering batch of contract stars who were collectively called Regal Babies.

Her contemporaries included Snooky Serna and Dina Bonnevie, who was then fresh from her runner-up finish in the Miss Magnolia beauty pageant.

The three young actresses were introduced in the coming-of-age movie, Underage, and they went on taking on more projects, either as a group or as individual stars.

Maricel and William showed great chemistry in their first movie together, Oh, My Mama!, and they became a love team on- and off-screen.

Maricel’s signature fast-talking, street-smart, and no-nonsense demeanor gave the false impression that she was snobbish, snooty and bitchy, despite being far from it in real life.

Her "taray" factor got the nod of many showbiz insiders, particularly the movie press, who then baptized her as the "Taray Queen."

She met her match in the sweet-talking and makulit yet irresistibly charming William. As Taray and Kulit, the pair became one of the top love teams not only of their era but of all time.

Ronnie Ricketts, a former fashion model, and Maricel had romantic relations that lasted for several years. In those years, they adopted a boy they named Marron, which is a portmanteau made up of the first syllables of their first names, Maricel and Ronnie.

Some of her memorable lines from those movies have become pop culture references.

Maricel also headlined a string of musical-variety TV shows, such as I Am What I Am, Maricel Live!, and Maria! Maria!, before starring in her first drama anthology, Maricel Regal Drama Special, which aired on ABS-CBN from 1987 to 1992.

HOW MARICEL BECAME THE DIAMOND STAR

She remained a big TV star, too, with the success of her drama anthology, which, after three years, was retitled The Maricel Drama Special, and it ran for the next seven years.

Year 1994 proved to be a banner one for Maricel, and the movie press, reportedly led by entertainment columnist and TV host Oskee Salazar, took note of the actress’s successive hits.

At that time, then President Fidel V. Ramos just signed into law Proclamation No. 448, declaring the period September 25, 1994 to September 24, 1995 as the Diamond Anniversary of Philippine cinema.

Hence, the movie press found it fitting to bestow the title Diamond Star on Maricel Soriano.

The Diamond Star continued to dominate the big and small screens at the turn of the new millennium with the blockbusters Mano Po (2002) and A Love Story (2007), and the top-rating sitcom Kaya ni Mister, Kaya ni Misis (opposite Cesar Montano), which was eventually retitled Bida si Mister, Bida si Misis.

But towards the second half of 2009, Maricel started experiencing a slump both in her career and in her private life. This stemmed from the death of her beloved mother Linda in July that year. Her grief was unabated with the loss of her talent manager Wyngard Tracy in November 2010 and of her idol Dolphy in July 2012.

Maricel admitted in an interview with Korina Sanchez on the broadcast journalist’s news and public affairs TV show, Rated K, aired in November 2012, that she was battling depression during those mournful years.

Thus, the actress decided to take what she called a “timeout” for two years. Little by little, she bounced back by appearing in GMA-7’s shows as a guest star and then as one of the lead stars in the Kapuso drama series, Ang Dalawang Mrs. Real, in 2014. She also took on supporting roles in the comedies Momzillas (2013); Girl, Boy, Bakla, Tomboy (2013); and My 2 Mommies (2018).

As 2019 draws to a close, Maricel wrapped up work on the recently concluded action-drama series, The General’s Daughter, and the horror flick, The Heiress, which will open in cinemas soon.

She seemed to have recovered from her past depression as she burst with energy and happiness in her Magandang Buhay guesting.

When the topic touched on her past relationships, her good friend Eric Quizon, who appeared on the show as a surprise for the actress, recalled the time Maricel was so in love that her life only revolved around the object of her affection.

Eric said, "There was a point in her life na walang makausap sa kanya. Lahat, tinalikuran…

Followers of Maricel and the local showbiz in general could identify the actress’s past love as actor Edu Manzano.

Maricel and Edu got married in a very private ceremony in 1989. But the union proved to be short-lived as they parted ways two years later.

"It’s not worth it,” she said in reflection, as she sang a line from an old English song, “(I Never Promised You A) Rose Garden.”

Except maybe when it comes to her two sons Marron and Sebastien.

Marron, the boy she adopted during her time with her ex-boyfriend Ronnie Ricketts, is now 31 years old.

Sebastien, on the hand, is the boy she gave birth to 25 years ago (with businessman Cesar Jalosjos as the father).

Maricel may have hit bumps along the way in her 48 years in showbiz, but just like diamonds—known to be the hardest substance and thus cannot be tarnished—her contributions in the industry shine ever brightly and are forever appreciated.