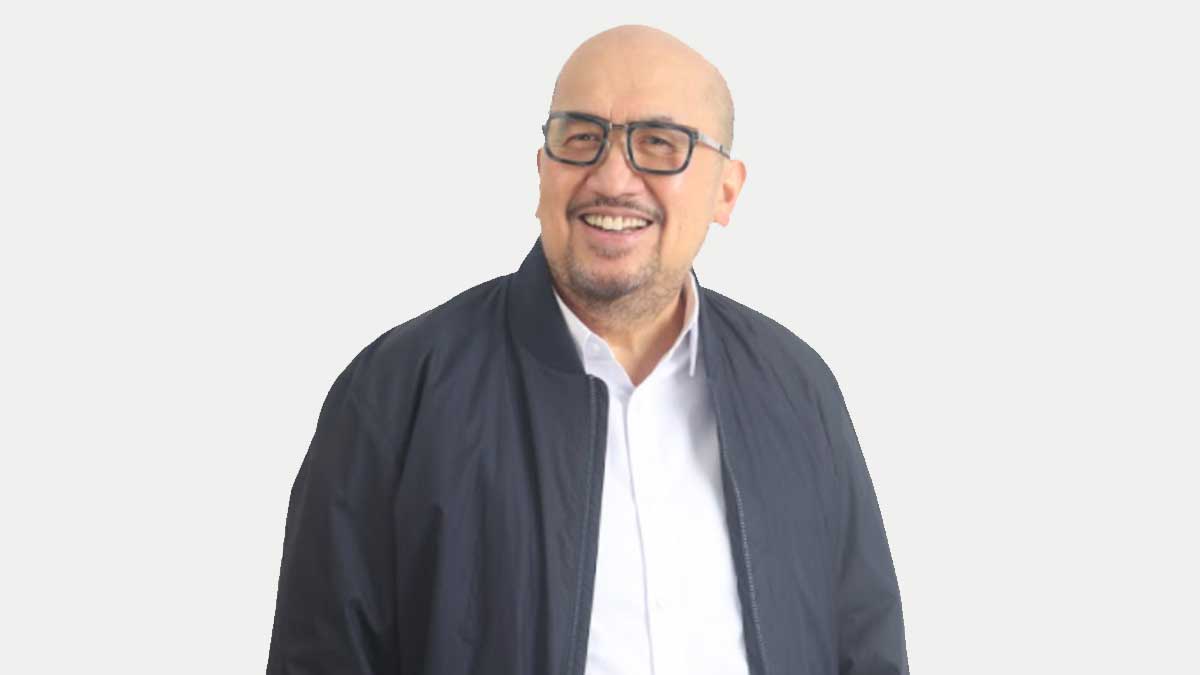 And he is that—the boss.

Except that nothing about the man is simple. Or more to the point, nothing the man touches remains simple. 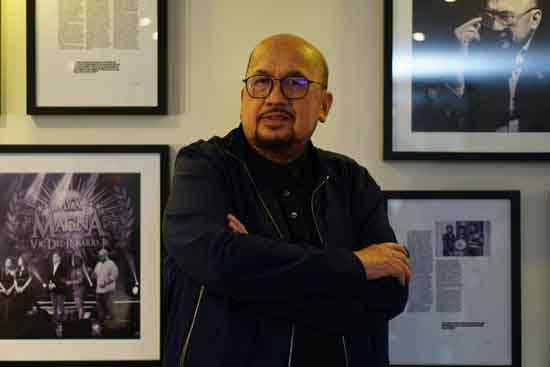 Boss Vic is riding high on an empire he founded 40 years ago on November 11, 1981, and one that he still chairs. VIVA Communications Inc., a movie production outfit built on the success of his trailblazing music business, is now a powerhouse entertainment company whose involvement has gone beyond music and movies.

Circa 2021, VIVA has a strong presence in talent management, events production, print and digital publishing, radio broadcasting, and foreign-film distribution. The company has also expanded into the food business ("I've always liked food," Boss Vic says). He has also made an aggressive entry into the digital world via Vivamax, its subscription-based, video-on-demand app on mobile.

But Boss Vic's fame, as far as the public is aware, will always come from being the man behind the careers of—among a slew of the country's biggest stars once or still managed by Viva Artists Management—Sharon Cuneta, Robin Padilla, Regine Velasquez, Sarah Geronimo, Anne Curtis, Andrew E, Vice Ganda, and JaDine. 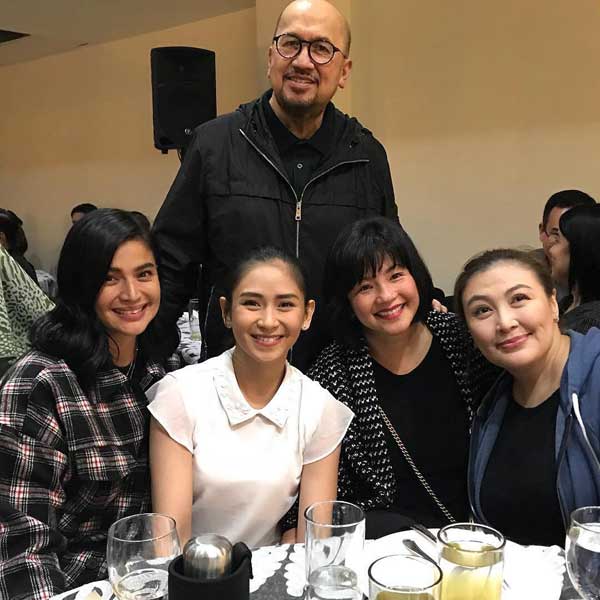 Today, at 76, Boss Vic is the Viva Group of Companies' Chairman of the Board and CEO.

How did it all begin?

PEP.ph (Philippine Entertainment Portal) invites Vic del Rosario on November 8, 2021, to spend an hour and a half with its editors and writers to recount how a self-confessed college "dropout" went on to become showbiz's Boss Vic.

On Christmas Day in 1965, the 20-year-old Vic attended a family reunion that would change the course of his life.

Back then, showbiz was not on the easy-going Vic's horizon at all, but his first cousin, Orly Ilacad, was already main man for Orly Ilacad and the Ramrods, a popular band.

Boss Vic recalls: "At that time, Orly was already a recording artist with his band...Parang rock star, sikat siya!

"E, ano, since we were close, wala naman akong ano, ano ako noon, e—ano ba ako? Dropout ako, e. I was like, in my younger years, juvenile pa tayo, so we had a lot of fun."

His mother, Adelaida "Dely" Rosal del Rosario, was the first to see promise in Orly's offer to her directionless son.

"Nagsimula kami [ni Orly] magnegosyo, not knowing anything about the business. Wala akong alam! Ang alam ko, magagandang songs, pero I was really out of showbiz."

They named their company Vicor, a portmanteau of Vic and Orly. Its given formal name was Vicor Music Corporation, which today is Vicor Music and falls under Viva Communications. 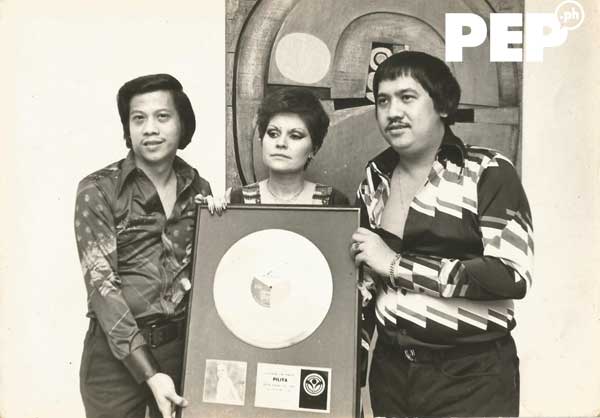 Vicor was established in 1966, the year Vic's firstborn, Vincent, by his late wife Mina Aragon, was born.

The recording company had a very rough start.

That was the era of the Beatles, a rock band from Liverpool, England, composed of John Lennon, Paul McCartney, George Harrison, and Ringo Starr, that would dominate the world's airwaves, including the Philippines.

Vicor had signed up Victor Wood by that time. The singer was literally a big man, and in the late '60s and '70s, Vic relates, dominated the local music scene in a big way.

Vicor also had Eddie Peregrina under contract, a short, thin man with a tall, big voice that belted out such hits as "What Am I Living For?" and "Together Again," to name a few. Not a day passed without Peregrina killing love songs on the radio.

Vic says Vicor came "from negative" and then "got lucky." With the singers and songwriters it had signed up, it began dominating the music scene, and eventually owned "ninety percent" of the market share.

Without doubt, Vic del Rosario Jr. says, they were No. 1.

Yet Vicor began as just one of the "small companies fighting for the ten-percent market share of local music."

How did he turn things around?

The University Belt is so-called because this Manila area, which includes bustling streets like España, Morayta, Claro M. Recto, and Gastambide, is chock-full of colleges and universities.

These count the more secular Philippine College of Commerce, Far Eastern University, University of the East, National University, Philippine School of Business Administration, and Arellano University. Also in the grouping are the avowedly Catholic University of Sto. Tomas, San Sebastian, San Beda, and Holy Spirit. All are within walking distance of Malacañang, or the Mendiola area, making the University Belt a highly populated melting pot.

As Vic correctly says, this is where the masa are.

"So, nung ako na namimili nung mga songs, naghi-hit naman siya. Then I realized I had a strategic mind."

He doesn't mind saying that aside from having a pulse on mass taste, he was good in math, and that in his elementary and high-school years "kaklase ko si MVP sa San Beda." [MVP or Manuel Velez Pangilinan is an entrepreneur who would also become a giant in his field.—Eds]

Vic would "also do the marketing, the finance" for the recording company, while his cousin Orly would take charge of production.

This is a lesson he would take with him as he took the bold step into filmmaking.

That same year, one of his main men at Vicor, Vicente "Tito" Sotto III, also got busy with his own career. From Discorama and Student Canteen, Tito—the same man who today is Senate President and is in the running for Vice-President of the republic in the May 2022 elections—joined Iskul Bukol in 1978, and then Eat Bulaga! in 1979.

Things were changing at Vicor.

Then in 1980, a devastating fire—or what Vic calls "ang malaking aksidente sa buhay ko"—cost the life of his daughter Vina Vanessa.

"When Mina [Aragon] and I were grieving, Sharon Cuneta came into our life. She was there every day in Madriñan where we stayed with my parents."

That period led to the establishment of Viva, a company name derived from the first two letters of their daughter's first two names, Vina Vanessa.

Sharon was then a fast-rising recording artist of Vicor. She is also the niece of Helen Gamboa, wife of Tito, who commissioned singer-composer Rey Valera to write "Mr. DJ," the first hit song of the then 12-year-old singer.

That was how P.S. I Love You, the first movie produced by Viva, came about, Vic says.

It was directed by Danny Zialcita, who had helmed Sharon's first starring role and hit movie, Dear Heart.

He smiles to recall the big gap between the PHP2K capital he needed to launch Vicor and the PHP2M he needed for Viva. [Note that Vicor needed PHP4K to get started; the other PHP2K came from Orly Ilacad.—Eds]

And when P.S. I Love You was shown in theaters on November 11, 1982, it went up against Action King Fernando Poe Jr.'s Bandido sa Sapang Bato. 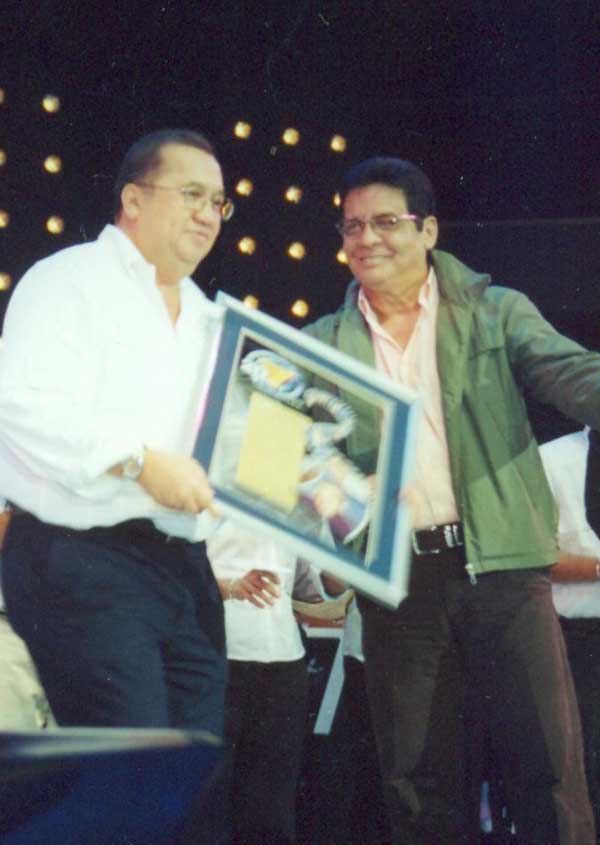 Sharon's starrer was a hit. So was FPJ's. 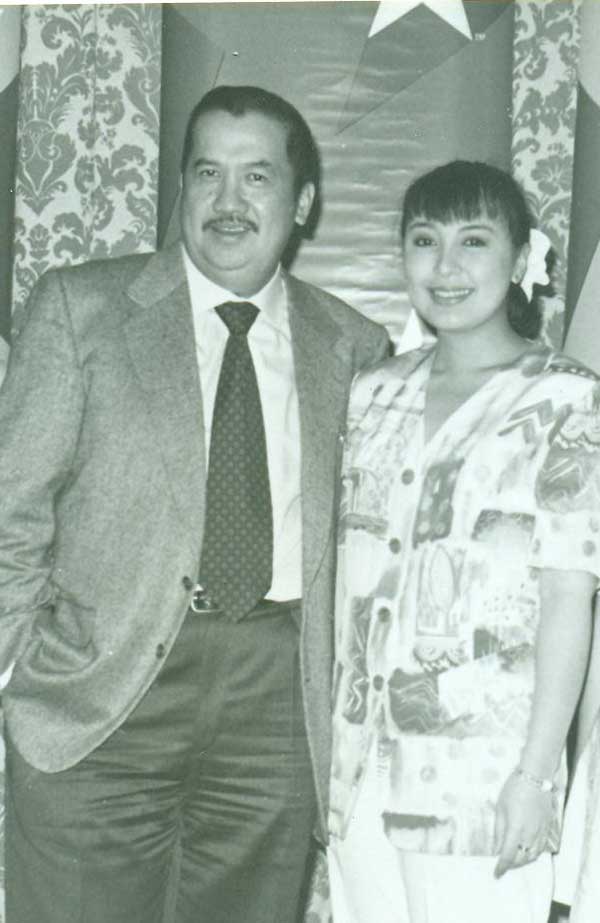 WHAT IS THE SUCCESS FORMULA OF BOSS VIC?

"Na-marry ko yung music experience ko into the moviemaking. I think it was a big edge.

"We sell the song, we push our movies through the songs, and after a movie becomes a hit, the song sells more.

"It was a proven synergy formula that worked to this day, up to now, and after 800 movies."

TEMPERAMENT OF A NEGOTIATOR

In movies as it was in music, Boss Vic had to become an expert negotiator.

He says his mantra is: Find a way. If you want it, you will find a way. 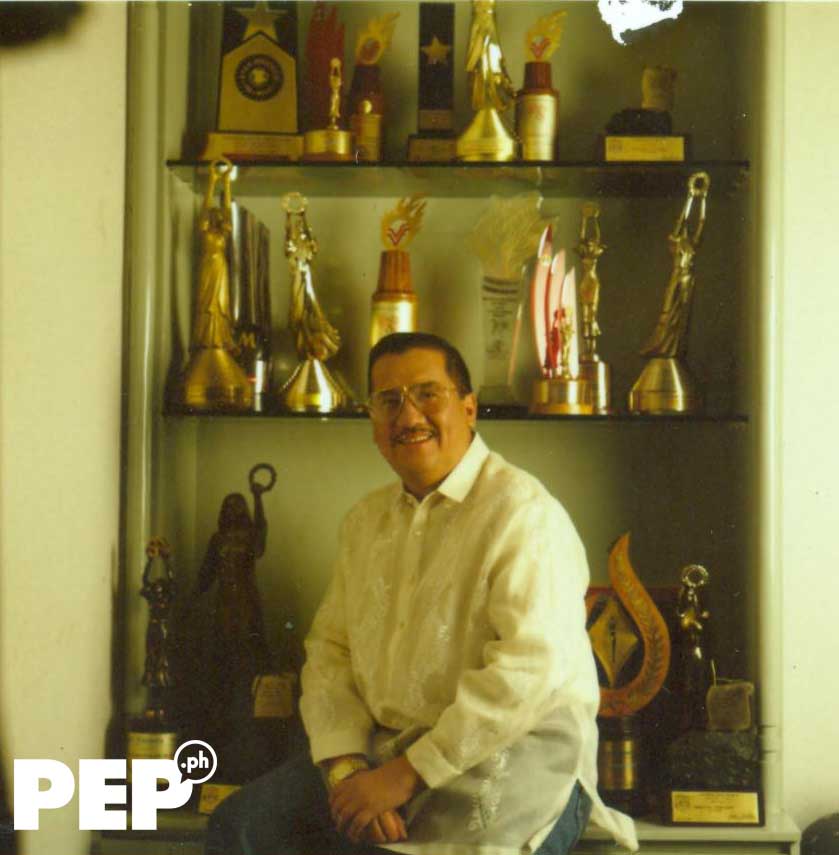 Boss Vic photographed against Viva's many trophies and awards.

This includes the testy area of talent fees. In the end, he believes you gain more by losing a little.

To date, he claims VIVA has strong partnerships with the three networks on free TV—GMA-7, ABS-CBN, and TV5.

He explains, "Binabalanse mo. Like dealing with the network, di ba, sometimes, you have a big star. But, eventually, you give in to them because they help you naman in other ways...Yun ang sinasabi kong importance of relationships, di ba?"

PEP asks if his temperament is naturally mild or he taught himself to be so.

SECURE IN HIS STANDING IN THE INDUSTRY

For one with his success record, he is bound to have detractors. What's the worst thing he's heard said about him?

He dismisses the question quickly: "I don't listen to that! Kasi alam ko yung aking capabilities. I don't get insecure with what I hear. Dati siguro, nung bata-bata ako.

"Ngayon...unang-una, most of them, na-outlast ko na sila, e. I have proven myself. Wala akong kailangang i-prove.

"I am happy with my business. I'm happy with what I'm doing. My kids want to continue, they don't want to sell, so continue." 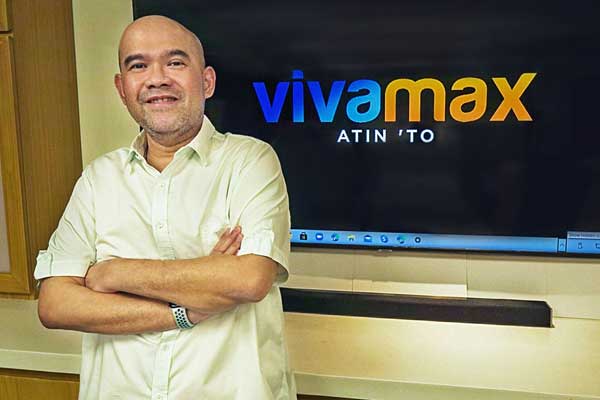 The desire to keep his people close also probably covers why a number of his people have been with him a long time.

One of Viva's bosses, June Rufino—also a talent manager whose long-time clients include Edu Manzano and his son Luis—has been with the company for decades.

He says that when he hired June, who was a close friend of Mina, he told June, "Pag nag-work ka sa akin, sana magkasama tayo nang matagal."

Boss Vic also mentions Tony Ocampo, his main man in his music ventures who has been with him for 52 years, or since 1969.

BIG VENTURE LAUNCHED DESPITE THE PANDEMIC

During a difficult time for businesses, Viva's major milestone is that it has gone on to launch the video-on-demand app, Vivamax, which in turn has launched new stars in AJ Raval and Sunshine Guimary.

Won't this go up against censorship?

"We're looking at 10 million subscribers in the next five years.

Asked how he manages to ride the waves of change, Boss Vic answers seriously: "If you don't evolve, you're gone.You cannot get stale. The business has to be synergized."

In the '70s, he wore many hats, and had to learn many new things.

"I was a concert promoter. I was a manager of artists. I was in music publishing. And I was a record company. Evolve, evolve, evolve."

Forty years later, he has an entertainment empire. It's been 55 years of navigating tastes, trends, innovations, and relationships.

But Boss Vic is not done navigating the ever-changing landscape. He says he watches K-dramas and all the hit movies. He is also not done mastering new ventures and hiring new experts. He talks about the algorithms, or the mathematical computations, of streaming apps.

He says change is always going to happen.

That Viva Communications has reached its 40th anniversary indicates that the Big Boss has been reading the signs well.