2022 PRESIDENTIABLES | Isko Moreno: From basurero in Tondo to Manila mayor 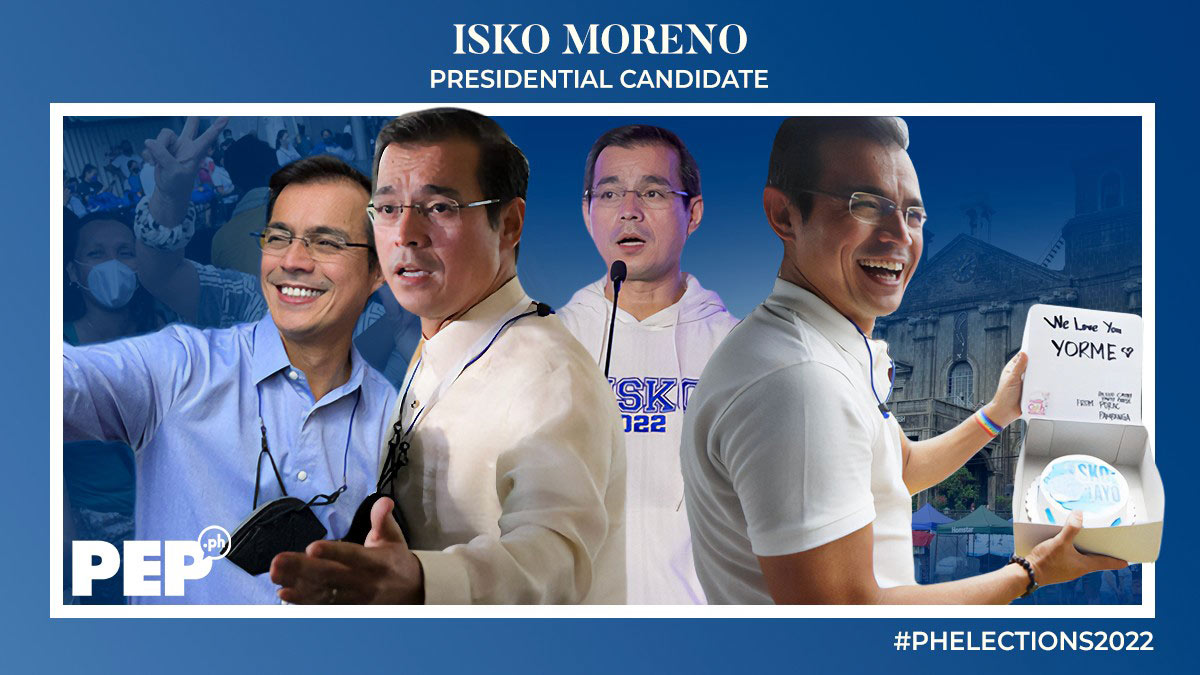 Manila Mayor Isko Moreno is a self-made man whose humble beginnings trace back to his father being a stevedore and himself being a basurero in Tondo. He is now a presidential candidate facing several controversies that threaten his chances of winning.
PHOTO/S: Isko Moreno Facebook
ILLUSTRATION: Igi Talao

When Isko Moreno began his showbiz career, his only intention was to earn money to have a better life.

In fact, the first thing he bought with his showbiz earnings was surprising but not unexpected: a comfortable set of underwear.

"Binili ko ho ng brip," he told an amused audience in a TV interview in the 1990s.

Moreno's approachable personality, a mix of candor and joviality, has endeared him to his fans and would serve him well when he entered politics.

Moreno was born into poverty. His father was a stevedor, and his mother washed other people’s clothes. They lived in the slums of Tondo, Manila.

He knew at an early age, he had to work hard to survive and help his family. His father’s job wasn't stable.

He began collecting trash to resell. He would also scrounge for discarded food in garbage cans.

Moreno’s funny side was instrumental in his journey out of poverty.

In 1993, he and his friends lampooned someone attending the funeral of a relative of Wowie Roxas, who would become his manager.

Moreno said instead of chastising him, the talent manager asked would he want to enter showbiz.

Seeing his chance to earn good money, Moreno dove head-on into the opportunity.

It was followed in the same year by another short appearance in the movie May Minamahal, which starred Aga Muhlach and Aiko Melendez. He played a younger version of Aga.

That was also the time Moreno became a part of the Monday group of the then-popular variety show That’s Entertainment, helmed by the legendary talent manager German Moreno, the late Kuya Germs.

He continued to have starring roles in movies over the years, including several sexy films such as Exploitation and Siya’y Nagdadalaga, both in 1997.

In an interview in a morning talk show in June 2020, Moreno said he was grateful that showbiz helped him get his family out of poverty.

Moreno’s impoverished background motivated him to join politics. In 1998, he was elected as a councilor for Manila’s first district.

He worked hard to be worthy of the position, and having only finished high school, foremost in his mind was to obtain a higher education.

He enrolled at a private school in Makati and earned his business administration degree in 2003. He went on to study public administration at the Pamantasan ng Lungsod ng Maynila, then tried to study law at the Arellano University.

In 2007, after finishing three terms as a councilor, Moreno ran to become the vice mayor of Manila as the running mate of then outgoing Vice Mayor Danilo Lacuna.

The campaign was tough, with Moreno at the center of a black propaganda that showed photos taken from his past sexy films.

The black prop proved to be ineffective. Moreno won the vice mayoralty.

Moreno was reelected vice mayor in 2013 in tandem with former President Joseph Estrada.

In 2015, Moreno tried to expand his horizons and gun for a Senate seat in the slate of then presidential candidate Grace Poe.

Moreno then joined the cabinet of the elected President Rodrigo Duterte in various roles, including as peace consultant, board chairman of the North Luzon Railways Corporation, and undersecretary for the Department of Social Welfare and Development.

In 2018, Moreno decided to run for mayor. He ran against former mayors Alfredo Lim and former running mate Estrada, and prevailed, becoming the city’s 22nd mayor.

It was in this position that Moreno recaptured the attention of the public.

He was tactful in interviews, even as he peppered his statements with his brand of street lingó, which has gone viral. He gained more fans and earned the nickname Yorme.

Many applauded Moreno’s projects. To improve the sector of education in his municipality, he signed an ordinance that gave PHP1,000 monthly allowance to the students of two city-funded universities in the city.

Then he mandated that senior citizens, PWDs (persons with disabilities), and solo parents who live in Manila would be entitled to a monthly allowance of PHP500.

He also had several infrastructure projects, such as the construction of a 10-storey public hospital, and the redevelopment of both the Manila Zoo and Jones Bridge.

Moreno’s management during the COVID-19 crisis also earned him several accolades. His government has already allocated more than PHP700 million for families severely affected by the pandemic.

He also gave free accommodation and transportation for healthcare workers. He also spearheaded free testing and vaccination facilities for his constituents.

In September 2021, Moreno announced he wanted to run for President in the 2022 national elections.

He was riding high; the survey results for the month placed him in third place at 13%, only a few points away from other possible presidential candidates—Sara Duterte at 20% and Bongbong Marcos at 15%.

Even better, he was leading all the possible non-administration candidates on the list.

There were talks of unifying the opposition and fielding only one candidate. If survey results were any indication, the logical choice would be Moreno.

Fast forward to now, less than one week before the elections: Moreno finds himself in dire straits.

The latest survey results have him slipped to fourth place behind Marcos Jr., Robredo, and Pacquiao, with his numbers sinking to 4%.

Plus he is no longer the leading opposition candidate. It's been taken over by Vice President Leni Robredo, who has gained a lot of ground and may have the momentum to win.

Allegations of plunder during his time as vice mayor resurfaced, as well as a report from the Commission on Audit that his office had 623 ghost employees in 2012 and 2013. The Ombudsman already dismissed both cases.

Then in January, he admitted pocketing about PHP50.8 million pesos in excess campaign funds from his failed senatorial run. Moreno defended himself by saying that he had done nothing wrong; he could keep the money if he paid taxes on it.

Allegations as well about him being a bogus opposition have further been inflamed when photos of Moreno with Bongbong Marcos, the supposed frontrunner in the presidential election, appeared last week.

The mayor dismissed them as black propaganda and pointed to Robredo supporters as the culprit.

He also accused the Robredo camp of bullying him to withdraw his candidacy.

With less than one week before the elections, Moreno maintains he will see this campaign to the end.

He definitely isn’t quitting; the word quit is not in the vocabulary of this man from Tondo.