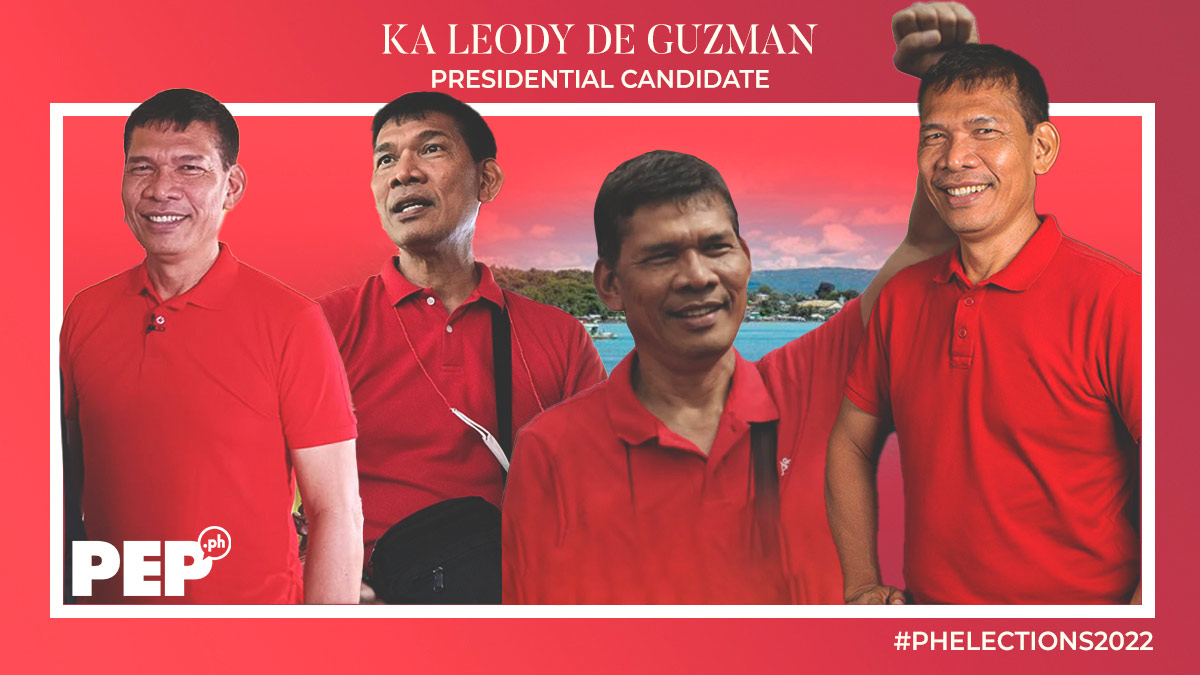 Leody de Guzman is running for President, but he cannot campaign full-time.

Daily, he wakes before 5 A.M. to prepare breakfast for his family. After breakfast, he goes to his sewing shop to do some work before starting his day campaigning.

The humble labor leader is not a politician. He is running for the presidency for a cause.

To begin with, he does not have deep pockets or generous donors to fund his campaign.

With only less than one week before the elections, can de Guzman succeed even without the campaign machinery?

De Guzman is the 7th of the 13 children of Lorenzo and Dolores de Guzman, two farmers who lived in Oriental Mindoro.

Two days after finishing high school in 1976, De Guzman immediately sought employment to help his family, and to earn money to fund his college education.

He worked at a gloves factory in Pasig at the same time that he was enrolled at a college in Manila for his degree in Customs Administration.

In 1983, the assassination of Ninoy Aquino rocked the consciousness of De Guzman and turned him into an activist one month after he finished college.

He joined protest marches that called for the ouster of then President Ferdinand Marcos.

He eschewed his dreams of getting a higher-paying job, opting to stay in the gloves factory and help organize its workers.

He became an organizer for the Alyansa ng mga Manggagawa sa Pasig (ALMAPAS) in 1984. Then he became a delegate, and eventually a Regional Executive Council member in the Kilusang Mayo Uno (KMU).

In 1993, he joined the newly founded Bukluran ng Manggagawa para sa Pagbabago (BMP), where he was appoined as the Deputy General Secretary.

He served in different roles in the organization over the years, until he became its president in 2018.

De Guzman had previously tried to enter politics twice. In 2016, he ran as the first nominee for Sanlakas, but the partylist wasn’t able to get enough votes to get a seat in Congress.

And while the surveys are not predicting a win, his name is still out there, and he could use the national recognition for a more successful race in the future.

But this recognition has come with a trade-off because now he has been the target of massive criticism.

One such criticism thrown at him was when he posted a family photo for Christmas last year.

Bashers cited a disconnect between De Guzman’s identity as a labor leader and his expensive-looking home. De Guzman chose not to comment on this issue.

His running mate Walden Bello took up the cudgels instead and tweeted, “A Christmas photo in a comfortable setting subjects Leody De Guzman's family to online abuse by those who think they should be living in a hovel. What an ugly display of middle class prejudice. Working people deserve respect.”

Later, De Guzman talked about the house in the "Kampanya Serye" interview. He said he got the funds from a case he won against an employer that illegally terminated him after 12 years of employment.

De Guzman’s main platform is to help ordinary workers get the same decent life that he enjoys.

The list of his platforms include the abolition of contractualization, a livable national wage, and giving all laborers the right to assemblies, unions, and strikes.

He also hopes to solve hunger and malnutrition by developing rural areas.

With less than one week before the elections, De Guzman will still make an effort to campaign. He doesn’t want to think of his low place in the surveys.