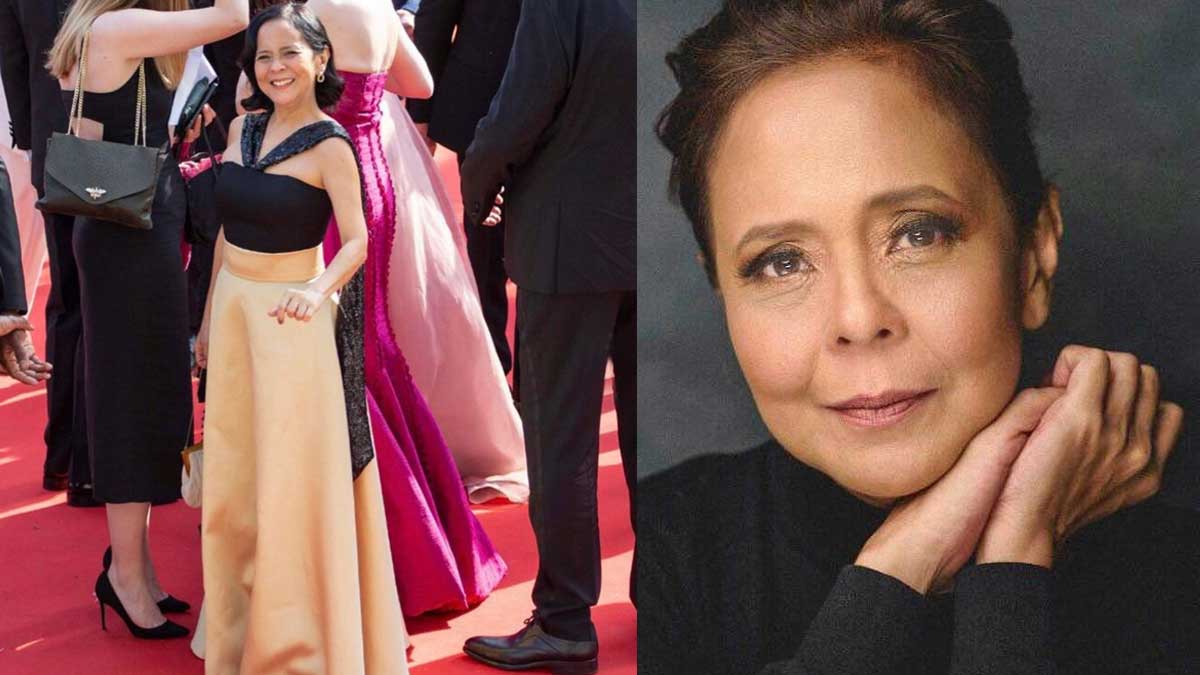 Actress Dolly de Leon has come a long way from her days as an extra in the movies and television. Dolly's performance in the satirical black comedy Triangle of Sadness catapulted her to worldwide fame and earned her nominations from several international award-giving bodies.
PHOTO/S: @dollydeleon Instagram

Whether you’re an avid or casual fan of television and the movies, it’s quite likely that you’ve seen Dolly de Leon at one point or another.

As in the case of most “extras,” Dolly, for most of her acting career, portrayed roles that are oftentimes lost in the memory of viewers too mesmerized by the sight of the bigger (and oftentimes more glamorous) stars on screen.

Nowadays, Dolly is getting VIP treatment both at home and overseas, thanks to her memorable performance in the satirical black comedy film, Triangle of Sadness.

Written and directed by Swedish filmmaker Ruben Östlund, Triangle of Sadness continues to create buzz months after making its debut at the 2022 Cannes Film Festival in May.

Caught at the center of all this attention is Dolly, whose portrayal of a toilet manager in a luxury yacht had critics calling her performance “commanding,” “hysterical,” and “scene-stealing.”

Dolly also made history as the first Filipino actress to be nominated at the Golden Globes, the award-giving body founded in 1944 by the Hollywood Foreign Press Association.

An Academy Awards—popularly known as the Oscars—nomination is also a possibility, fingers crossed.

All these blessings are the culmination of Dolly's hard work and perseverance throughout the years.

Dolly, by all means, is not an overnight success, making her rise to the top all the more inspiring than it is surprising.

ACTING AS AN ESCAPE

Dolly discovered the power of acting while doing a school activity as a young student.

That mundane but cathartic exercise inside the classroom was liberating for the young Dolly, who grew up in a household where openly showing vulnerability was frowned upon.

“I can live vicariously through characters or be people I can never ever dream of becoming.”

Dolly cited her role in Erik Matti’s 2021 horror film Folklore: 7 Days of Hell for HBO Asia as a good example of the magic of performance art.

Acting became a lingering fascination for Dolly even in high school at St. Scholastica's College.

In college, she took Bachelor of Arts in Theater at the University of the Philippines in Diliman, Quezon City.

One of Dolly’s mentors during her formative years as an actress was stage director and actor Tony Mabesa, who in 2019 was posthumously named National Artist for his contributions to theater arts.

Performing on stage allowed Dolly to hone her craft.

Theater instilled in her the importance of discipline and professionalism while learning valuable techniques that came in handy as she furthered her career.

Like many stage actors, Dolly would branch out to television and movies to go alongside her theater projects.

She would take on supporting roles for decades, doing projects produced by major and independent studios under the watch of young and established directors.

A quick glance at Dolly’s resume reveals that she appeared in the movies The Arrival, Anatomiya ng Korupsiyon, Diary ng Panget, Trophy Wife, Ang Babae Sa Septic Tank 3: The Real Untold Story of Joseph Bracken, Cuddle Weather, and On The Job: The Missing 8.

Dolly appeared in more movies and TV shows than what is listed online under her filmography.

However, work for bit players like Dolly can be few and far between at times.

The meager pay afforded to character actors didn't help either.

Thus, it’s not unusual for Dolly to take on several jobs simultaneously to keep her afloat financially for the sake of her four children.

She recounted facilitating team-building activities and teaching presentation skills and social networking to help individuals learn how to conduct themselves in a corporate setting.

The uncertainty of work in showbiz made Dolly contemplate quitting the industry altogether.

Juggling various jobs with no stable work to rely on took its toll on Dolly mentally and physically at some point.

“What kept me going were the phone calls, the texts, the producers, and the directors still hiring me,” Dolly looked back.

Being grateful and simply enjoying the process helped Dolly see things from a broader perspective.

She was still getting offers and referrals for acting projects, anyway.

Dolly could only thank herself for not giving up as she would land the biggest break of her career soon after.

In 2018, Dolly learned that an audition for an international movie written and to be directed by Swedish filmmaker Ruben Östlund was ongoing.

How Dolly got wind of the opportunity was typical of the Bayanihan spirit prevalent in the close-knit community of artists in the entertainment industry.

Dolly submitted audition clips for what turned out to be the satirical black comedy film, Triangle of Sadness, in October 2018.

She filmed three scenes for the audition video that she submitted.

Dolly met with Ruben online through Skype in December of that same year to discuss more about the film and role that Dolly was auditioning for.

Much to her surprise, Dolly bagged the role of a toilet manager named Abigail.

She was later informed that filming for the movie would commence soon.

Working with Ruben was nerve-wracking at first for Dolly, who was a fan of the director’s past works Force Majeure (2014) and The Square (2017).

Dolly commended the Swedish filmmaker for making sure that working conditions were safe and comfortable for everyone on the set despite the limitations brought about by the COVID-19 pandemic.

The cast and crew shot scenes in Sweden and Greece.

Portraying the character of Abigail in Triangle of Sadness had certain challenges that Dolly had to overcome to effectively bring the role to life.

There was, of course, Ruben’s vision for the character and how it fits into the overall narrative.

Likewise, Dolly had her own ideas on how to take on both the subtle and noticeable characteristics of Abigail as the story progresses.

Another challenge for Dolly was how to best show Abigail’s strong personality which is necessary for the latter part of the movie.

She praised Ruben’s brilliance behind the lens for solving this dilemma.

Finally, there’s the challenge of assuming the character of an overseas Filipino worker.

Dolly was cautious not to come across as stereotypical in her portrayal of Abigail.

PUTTING THE WORLD ON NOTICE

The critical success earned by Triangle of Sadness caught Dolly by surprise.

She knew the film was good, but nothing prepared her for the deluge of positive words from critics and viewers who saw the movie.

Dolly is no stranger to acting awards. She bagged the Best Supporting Actress award in 2020 from FAMAS for the movie, Verdict.

But there's no denying that the recognitions she got for Triangle of Sadness were huge affirmations for someone who toiled in obscurity for more than two decades.

Triangle of Sadness made its Philippine debut in November at the QCinema International Film Festival before making the rounds of movie houses across the country courtesy of TBA Studios.

DEALING WITH GRIEF AMID THE WINS

But fate has an odd way of throwing unexpected curveballs to keep us grounded.

Amid all the glowing reviews that Triangle of Sadness was getting came the shocking news that the film's lead star, actress and model Charlbi Dean, passed away on August 29, 2022 from bacterial sepsis while in a hospital in New York.

Charlbi's death — which came three months after the Cannes Film Festival — deprived her of the chance to witness and enjoy the success of the movie that she did with Dolly.

Adding to Dolly’s heartbreak was the passing of her mother while she was in the middle of touring the West to promote Triangle of Sadness in an effort to boost its chances of landing an Oscar nomination.

“I was able to spend five days with her bago siya pumanaw.

The coming weeks and months of 2023 will reveal the outcome of Dolly's several nominations from international award-giving bodies.

We will also find out if an Oscar nomination is in the cards for Dolly — something that many of her kababayans are praying for, hoping to finally witness a Filipino clinch the coveted honor.

Being the current toast of Philippine and international show business is unnerving for someone who is used to staying quietly in the background, dwarfed in the spotlight by her more popular co-stars.

But Dolly knows too how fleeting these moments are in an industry driven by shifting trends and where people are always hungry for the next big thing.

“So yun ang ginagawa ko ngayon ini-enjoy ko na lang. I just make the most of it.”

More than the awards and recognitions, Dolly is happy and proud to serve as an inspiration to fellow artists who continue to strive and love their craft despite the many challenges.

Dolly knows how difficult it is to get that elusive breakthrough project, and how luck, aside from hard work, can play a huge role in achieving that dream.

For Dolly de Leon, the grind never stops — with or without the accolades.