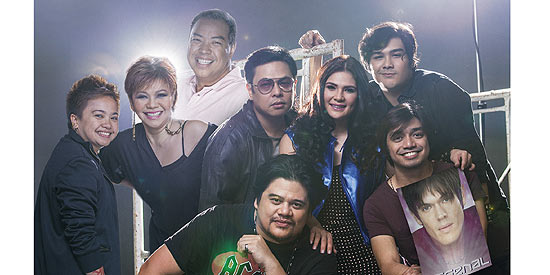 Atlantis Productions continues its 2012 Season with Rock of Ages, the critically acclaimed five-time Tony Award nominated Broadway musical. This hilarious, feel-good love story is told through such '80s hit anthems like I Want To Know What Love Is, Don't Stop Believin', We Built This City, Hit Me With Your Best Shot, and Every Rose Has Its Thorn.

In the show, it is 1987 on the Sunset Strip in Los Angeles. Drew, a young busboy dreams of being a rock star while he works at the Strip's most famous bar, The Bourbon Room. There, he meets Sherrie, a small-town girl who goes to LA to pursue her dreams of being an actress. They fall in love and then lose each other when the (in)famous, sexy, over the top rock star, Stacee Jaxx comes into the picture.

Giving life to these roles in Manila are three powerhouse performers. International rock sensation MiG Ayesa returns to his homeland to play Stacee Jaxx, a role he played on Broadway which he creates anew for the Manila production.


MiG, who is currently in London performing in the musical Thriller Live! says, “It is such a great honor to bring this show to the Philippines. Playing the role of 'Stacee Jaxx' around the USA and on Broadway was an amazing experience but is nothing compared to performing it back in my home land. I am so looking forward to rocking the very foundations of Manila with Rock of Ages. It ain't nothing but a good time, and it don't get better than this!”


The rock star was actually born in Manila but was raised in Sydney, Australia. He became known for being a finalist in the reality show Rock Star: INXS.

Balladeer and recording artist Nyoy Volante plays Drew while actress-recording artist Vina Morales brings the energetic song and dance performances she is known for to the theater for the first time as Sherrie. Their love story plays against the backdrop of the music, the wild nights and the energy of the Sunset Strip in the '80s where we meet a bunch of very colorful characters:

The show's wild and wacky narrator, Lonny, is played by Philippine rock icon, Jett Pangan. He has received critical acclaim for his numerous theatrical roles in shows such as Next to Normal and Jekyll & Hyde. As the vocalist of the The Dawn, now gets the chance to bring his rock and roll roots to the stage!

Lonny works at the Bourbon Room alongside bar owner Dennis Dupree who will be played by veteran theater actor, Jamie Wilson.

Threatening to close down the Bourbon Room to turn the Strip into a 'model of clean and efficient living' are father and son German developers, Hertz and Franz. Calvin Millado plays the tightly wound tycoon Hertz while Bibo Reyes is cast as Franz, the young tycoon-in-training who soon gets caught between pleasing his father and following his heart.

Passionately protesting against these developers is bohemian activist Regina. Singer, composer and actress Aiza Seguerra returns to the musical theatre stafe as Regina. Last seen as Gary Coleman in all 5 runs of the hit musical Avenue Q, Aiza returns to the stage as you have never seen her before.

Down the road from Bourbon Room is the Venus Club--a haven for 'gentlemen,' rockstars and every persuasion in between. This club is run by diva and wise sage, Justice Charlier. Running with this part will be the energetic Jinky Llamanzares. With an impressive international stage career that includes having played Gigi in Miss Saigon, Jinky was last seen on stage as the villainous Ursula in Disney’s The Little Mermaid earning a standing ovation every night for her unforgettable performance.

Rock of Ages, directed by Chari Arespacochaga, runs from June 15 to July 8, 2012 at the Carlos P. Romulo Theater at the RCBC Plaza in Makati City. For tickets and showbuying inquires call Atlantis Productions at Tel. No. 892-7078 or 840-1187.