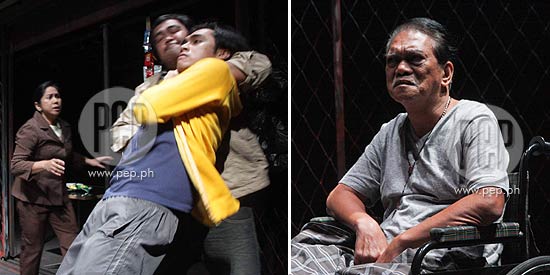 In this scene (left frame) from Walang Kukurap, Jonathan Tadioan (Lu) strangles Marco Viaña (Marky) while Suzette Ranillo (Christina) tries to stop them. Lou Veloso (right frame) is also part of this play that tackles graft and corruption in a fictional town.

Walang Kukurap, the current offering of Tanghalang Pilipino, is a controversial play that "explores the darkest side of the Filipino soul."


This suspense thriller play tackles graft and corruption in a fictional town in the Philippines. Theatergoers will get to follow the story of five families whose lives are intertwined in the political arena.


It is written by Layeta Bucoy who has been tagged as the "female Quentin Tarantino of Philippine theater" because of her succession of written works for the stage that are considered gripping and violent.


Bucoy's major plays reflect the prevailing socio-political conditions affecting our nation, with emphasis on corruption in different aspects of governance, and election related-violence that are rampant in many areas of the country.


It is for this reason that Tanghalang Pilipino chose to present Layeta Bucoy's Walang Kukurap, which opened to highly enthusiastic viewers last September 14, 2012 at the CCP Tanghalang Huseng Batute.


Among the guests during the opening night were noted politicians such as Senator Koko Pimentel, Congressman Teddy Casino, and the controversial NBN/ZTE whistleblower, Rodolfo "Jun" Lozada Jr.


"Dapat 'walang kukurap'!" exclaimed Layeta as she urged Filipinos to be more vigilant in their fight against corruption in many forms.


When asked about the tag "Female Quentin Tarantino of Philippine Theater" given to her, Ms. Layeta quipped: "Kakaloka! Nakakatawa at nakakatuwa!


The award-winning Hollywood filmmaker and screenwriter Quentin Tarantino is known for the martial arts flick, Kill Bill (Volumes 1 and 2) as well as the war movie Inglorious Basterds (2009). As screenwriter, Tarantino won an Oscar for the Original Screenplay of Pulp Fiction (1994).


Ced's wholesome personality, last seen in the Channel 2 soap opera Hiram, is a departure from the kind of character he agreed to portray in this play.


Noted danseur, Nonoy Froilan, also makes a rare stage appearance, as a "trapo" (traditional politician) and he said his role is very challenging.


The same holds true for Manila 6th District councilor and award-winning actor, Lou Veloso, whose scene at the close of the play's first act provides a shock that will long be remembered by theatergoers.


But the most notable of the "comebacking actors" in Walang Kukurap are the two female protagonists who both essay "bida-kontrabida" roles. Suzette Ranillo is the fiery mom Christina (to Delphine Buencamino's Mira) who got entangled in the web of political intrigues and violence. Mymy Davao plays Melba, an out-and-out corrupt and viscious politician's widow.


According to Suzette, it has been years since she last appeared onstage locally although she did a play, New Yorker from Tondo, for Pinoys in the United States.


"That was in November of last year," Suzette informed PEP.ph. "Dito, matagal na. I think the last one was Sisa pa yata for Noli Me Tangere. Matagal-tagal na rin.


Mymy informed PEP her last stage appearance was for a play called Mate (Checkmate) at the PICC. "It was directed by Ron Heritan; with Julio Diaz, Sylvia Sanchez as her co-actors.


Her last TV appearance was for a role in GMA-7's period drama series Amaya. "Puro TV guestings lang ako. Wala pang 'super-regular' [appearance]. That's why when I was offered this, I grabbed the opportunity."


THREE-FOLD CHALLENGE. According to Nanding Josef, TP's artistic director, "The straight play Walang Kukurap is a vibrantly new and highly experimental research-based contemporary production, which blurs the line between art and life, fiction and reality as it 'vivisects' the darkest parts of the Filipino soul.


"Holding no punches, it pounds away in search of answers, attacking the essence of corruption on multiple levels.


"It challenges its audience, philosophically, morally, and emotionally. It asks not to just point fingers at the monsters outside but also stare honestly in the mirror, at one's self, in homes."


Further, Tata Nanding noted, "Walang Kukurap is a forceful reminder that if people do not take the challenge to better this world, then there is no need to die to experience hell."