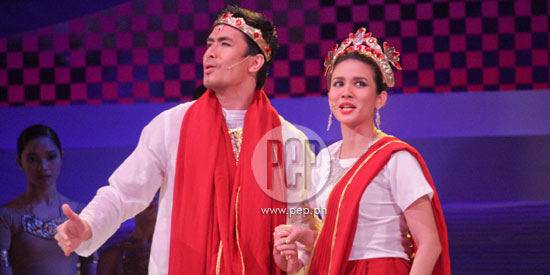 Lover’s reckless embrace, that burns without a flame. It leaves a mark you cannot erase. The heart it touches once will never be the same.

Rama Hari is based on an important literary masterpiece, the Ramayana. The best Filipino creative minds have come together to retell the story of this great epic from India. National Artist for Literature Bienvenido Lumbera wrote the libretto while National Artist for Theater and Literature, Rolando S. Tinio, translated it to English. Choreographed by Ballet Philippines’ founder Alice Reyes, this pop ballet musical is set to music by renowned composer Ryan Cayabyab while the masterful execution of the costumes and the set can be credited to the late National Artist for Theater Design Salvador Bernal.


Rama Hari depicts the enduring love between the prince Rama, an incarnation of the god Vishnu, and the princess Sita, who would eventually become his wife.

There are countless elements that make Rama Hari a must see show. This grand production is as dazzling and unforgettable as any that has been staged at CCP. I could easily argue that the talent level matches even that of foreign shows like The Phantom of the Opera that had a very successful run in CCP this year.


As eloquent as the words and music are, the choice of singers to perform these songs is very crucial. Internationally acclaimed singers chosen as lead characters proved that they are more than worthy to restage this masterpiece that was first mounted 32 years ago. Christian Bautista and Karylle showed their regal bearing onstage as they lent their powerful voices to this production. Their voices soar through the venue, allowing theatregoers to fully appreciate the lyrics of their Tagalog songs.


During the opening night, Christian and Karylle were tapped as leads while certain performances will feature OJ Mariano as Rama and Kalila Aguilos as Sita.


Robert Seña is very effective for his commanding performance as the villain Ravana.


Ballet has the ability to convey emotions in a way that is visually universal. The power and grace of the human body in executing pirouettes and leaps are used to tell the story. While the singers are pouring their emotions into their songs, the ballet dancers are simultaneously giving their interpretation of this adventure-love story.

The Ballet Philippines Company should be commended for their work on this production. They displayed excellent teamwork as they brought life to the townspeople, demons and monkeys in the play.


Kudos to the dancers who were able to execute difficult and complicated moves that help propel the story forward. There are quite a few instances when the audience will absorb the story faster or quicker from the choreography more than the lyrics. This is can be attributed to the choreography of Alice Reyes and the very rich talent pool of the company.

The masterful execution of the costumes and the set can be credited to the late National Artist for Theater Design Salvador Bernal. Even though some of the pieces are more than 30 years old (having come from the original production in 1980), they are given a new lease in life through this production. The dancers’ costumes are also able to convey their characters as being villainous, heroic or magical. One costume literally dazzles more than others. The Gintong Usa or Golden Doe (alternately played by Jemima Sanielle Reyes and Denise Parungao) will immediately catch the attention of theatergoers since it is covered in gold sequins from top to bottom and shows off the performer’s sexy silhouette for its skin-tight and body hugging fit. Gold is used profusely in the main character’s costumes, indicating wealth, power and royalty.

The predominantly white background allows the glittering and colorful costumes to stand out even more. The simplicity and space at the center allows for greater movement for the dancers while Christian and Karylle sing on an elevated platform easily seen by the audience on both sides.


There is no better way to end this year’s bumper crop of theater productions than watching Rama Hari.


Rama Hari is running until December 9, 2012 at the main theatre of the Cultural Center of the Philippines.