Martir sa Golgota to be staged at the CCP 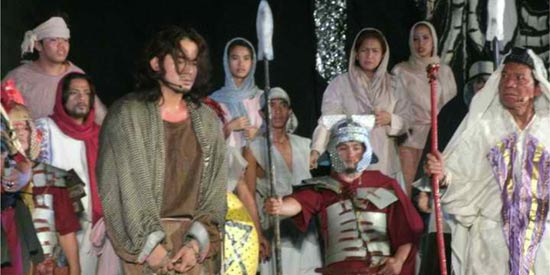 
"The Manila Mobile Theater Foundation (also known as Tanghalang Sta. Ana) will stage a pre-Lenten production titled Martir sa Golgota, a senakulo play based on the life and passion of Jesus Christ on March 22, 2013 at 7:30 pm and March 23, 2013 at 3:00 pm at the Cultural Center of the Philippines’ Tanghalang Aurelio Tolentino (Little Theater).

"Manila Mobile Theater was born in September 1989. It was founded by Councilor Lou Veloso, who himself is an accomplished and multi-awarded film-television-stage actor. The group initially had 75 active members and was primarily organized to help the out-of-school youths, students, professionals, laborers, vendors and workers hone their talents in acting on stage plays, be it one-act or full-length. After acquiring the necessary skills, they became part of various plays which were mostly mounted in Plaza Hugo community stage and, later on, in Sta. Ana Arts Center, a small indoor theater located at the backroom of the side stage built through the initiative of the founder with assistance from the Manila Government officials and other donors.

“Martir sa Golgota is presented to the public in selected venues from Holy Monday to Black Saturday with actors honed at a home base from the community. Throughout the years, it has attracted celebrities and theater actors who perform pro bono. An interesting aspect of Martir is its contemporary improvisational factor. The road to Calvary is convoyed on the streets of the community giving the audience a close up on Christ’s passion. Tanghalang Sta. Ana remolded this theater classic for contemporary audiences by injecting current social issues.