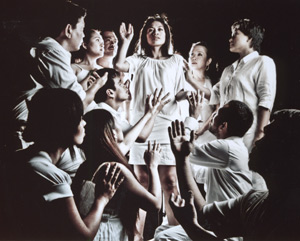 May Bayot (center) plays Elsa in the abridged version of Tanghalang Pilipino's Himala the Musicale. It will be performed at the Drama Salon of the Shanghai Dramatic Arts Centre, Shanghai, China, on November 22-23.


Our kababayans in China will have the chance to witness the life, passion, and death of the visionary Elsa onstage. Tanghalang Pilipino's Himala the Musicale has been chosen to represent the Philippines in the Asian Contemporary Theater Festival in Shanghai, People's Republic of China, this November.

The 11-strong cast of Himala the Musicale will perform the play using Tagalog prose and lyrics while English and Chinese translations will be screened overhead for the sake of the foreign audiences. A moving story about faith and faithfulness, truth and delusion, Himala the Musicale is based on the 1982 film by National Artist for Film Ishmael Bernal about a young woman, Elsa, who claims to have spoken to the Virgin Mary during an eclipse and begins to exhibit healing powers. In the movie version, superstar Nora Aunor played the simple girl who uttered the famous lines: "Walang himala! Ang himala ay nasa puso ng tao... ang himala ay nasa puso nating lahat."

When asked to speculate on why Himala the Musicale was chosen to represent the Philippines, composer and musical director Vince de Jesus told PEP (Philippine Entertainment Portal), "Very Pinoy ang Himala. Yung holding on to religion during times of desperation lalo na ngayong panahon na ito, we're so desperate. Di ba, there is prostitution of everything—from religion and even of the body...Lahat na lang ginagawa to survive."

In fact, one of the highlights of the play is the showdown between Elsa the healer and Niña the prostitute.

Vince also commended Tanghalang Pilipino for mounting a successful abridged version of the play. "This was first mounted in 2003 with a cast of twenty, then again in 2006, with cast of forty. Ang daming songs that were cut from the original—siguro one-third of the songs were removed in this abridged version.

In the middle of the set, there is a stand where the image of the Virgin Mary is placed, surrounded by tree branches that hang from the ceiling. A brightly lighted box bearing the name of the cabaret, Disco Heaven, is placed on stage to indicate the place where prostitutes wait for their customers.

In his playwright's notes, Ricardo Lee said, "I wrote the screenplay of Himala in 1976, at the time when I had many questions about life and religion. I had just been freed from prison then (Note: Ricky Lee was a political prisoner under martial law in 1974) and answers were hard to find. I had read about a story of a girl in Cabra who had experienced a miracle and I thought we had the same story. I pitched the script for six years before it was finally made into a film.

"For me, Himala is about questions, not answers. It is not important whether or not Elsa experienced a miracle, or who it was who killed her. What is important is that Cupang became a big vortex of desperation: that in our present time we still need miracles."

SYNOPSIS. In a remote village of Barrio Cupang, a young girl named Elsa (May Bayot) claims that the Virgin Mary spoke to her during a solar eclipse. She reveals her vision and starts healing people. She then becomes a national figure as pilgrims and curiosity-seekers descend on her village, thus pushing the village to finally confront its own needs and beliefs. A story about faith and faithlessness, truth and delusion, it tackles the endless and timeless struggle of humans in their quest for something to believe in. the story is based on an account of the alleged apparitions of the Virgin Mary on Cabra Island, province of Occidental Mindoro, Philippines, in 1967.

Also in the cast of outstanding performers are Isay Alvarez (as the prostitute Nimia), Cynthia Culig-Guico (as Chayong), Mila Bolaños (as Aling Saling), Leonel Guico (as Orly), Jay Cruz (as Pilo), Bong Embile (as Igmeng Bugaw), and the Tanghalang Pilipino Actor's Company. Gino Gonzales designs the production while Dennis Marasigan is technical director.

Himala the Musicale will be performed at the Drama Salon of the Shanghai Dramatic Arts Centre at 7 p.m. on November 22 and 23, 2007. Tangahalang Pilipino's participation in the festival is made possible with the cooperation of the Philippine Consulate General in Shanghai.