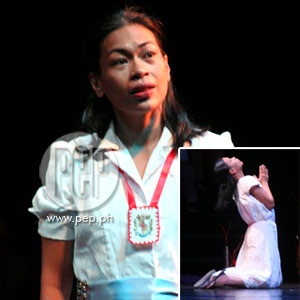 Himala the Musicale is written by Ricky Lee, with music and lyrics by Vincent de Jesus. This musical adaptation has won Aliw Awards for director Soxie Topacio and lead performer May Bayot (main photo and inset), who plays Elsa.


A solitary note from a grand piano pierces the darkness. An old woman makes her way slowly across the stage, as if floating on air. There are no elaborate sets or costumes—only vivid lighting, the extraordinary singing voices of the actors and not-so-simple dance sequences that tell the complex story of Himala the Musicale.


The play boasts a brilliant script written by Ricky Lee and haunting musical compositions from Vince De Jesus, as well as riveting performances by the cast. Himala the Musicale was the Philippines' sole entry to the Asian Contemporary Theater Festival in Shanghai, People's Republic of China. According to Tanghalang Pilipino, this is the first time the Philippines will participate in the festival.

According to ShanghaiDaily.com, an English-language newspaper supervised by the Chinese government, the three-week festival showcases groups from around the world that will stage more than 50 performances of 21 plays, ranging from experimental musicals and traditional operas to puppetry and physical theater.

To quote the publication's description of the Filipino presentation Himala: "If you are into Philippine singers in a myriad of Shanghai's bars and pubs, don't miss the Philippine musical ‘Himala' by the country's Tanghalang Filipino Theater."

In an interview with ShanghaiDaily.com, Yu Rongjun, marketing manager of Shanghai Drama Arts Center and director of the festival, said that the plays were chosen because "Each work represents the theatrical development of the country."

A few days before leaving for China, Tanghalang Pilipino performed the abridged version of Himala for the benefit of the press and representatives of embassies in the country.

PHILIPPINE PRIDE. There's no doubt that May Bayot, Isay Alvarez, Cynthia Culig-Guico, and Lionel Guico have all given their best in bringing the story to life. More is at stake than the adulation of theater goers. Tanghalang Pilipino has taken upon itself to tap the best thespians who will showcase the versatility and immense talents of Filipinos.

"All our actors jumped at the chance of performing for Filipinos abroad, even if they're not getting paid," said company manager Yvette P. Macayan. "They all realize that part of Tanghalang Pilipino's mission is to serve the Filipino community, wherever they may be."

Yvette tells PEP (Philippine Entertainment Portal) that on their first performance night (November 22), the crowd gave Tanghalang Pilipino a standing ovation. She also narrated that the group encountered difficulties, especially in overcoming the language barrier, while staying in Shanghai, China. The 11-strong cast is due to arrive in Manila on Sunday, November 25.


In Himala the Musicale, Elsa (May Bayot) claims to have seen the Virgin Mary during an eclipse and starts healing the people of Barrio Cupang. Elsa's childhood friend Nimia (Isay Alvarez) becomes a prostitute for the Disco Heaven cabaret while Chayong (Cynthia Culig-Guico) devotes herself to Elsa and her cause.

May Bayot was named best theater actress during the 2003 Aliw Awards. She has been active in the entertainment scene since the late ‘80s and consistently gives powerful vocal performances. She gives justice to the role that propelled Nora Aunor to stardom. In the stage version of Himala, it is May Bayot's skillful, live vocal performance and understated acting that is expected to thrill audiences abroad.


Isay Alvarez plays her role in Himala as seductively as she did in Miss Saigon. She plays the role of Nimia, Elsa's childhood friend who is led into a life of prostitution. Isay has managed to keep her svelte figure to convincingly play the role of a seductress. She gyrates her hips and shows off her thighs as if enticing the viewers to come join her in the Disco Heaven cabaret. Viewers will look at her, listen to her, as she commands their attention. Isay delivers provocative lines and says the slang word for the "heaven between her legs," eliciting loud laughter from the crowd.

Orly the filmmaker who documents the "miracles" of Elsa is portrayed by Lionel Guico. He bears witness to the rise and fall of Elsa the visionary. He points out why Himala is such a powerful stage presentation. "It's in the work, the words. You don't notice that it's the strong music that also carries the emotions. I can't say enough about Vincent De Jesus' music and the wonderful choreography of Jose Jay Cruz."