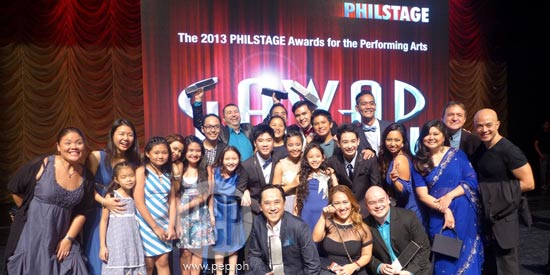 Three Filipino adaptations of British dramatist William Shakespeare's classic plays, produced and staged in 2013, were among the big winners at the 6th Gawad Buhay! Awards, presented by member-theater companies of PHILSTAGE, on June 6, at the Tanghalang Aurelio Tolentino (Little Theater) of the Cultural Center of the Philippines (CCP).

Tanghalang Pilipino's Der Kauffmann, an adaptation and reimagination of William Shakespeare's classic play, The Merchant of Venice (as translated into Filipino by National Artist for Literature and Theater Rolando Tinio), won a total of 7 awards, including Outstanding Production of an Existing Material for a Play, Ensemble Performance for a Play, Stage Direction by Tuxs Rutaquio and Rody Vera, Adaptation (also by Vera), Sound Design by TJ Ramos, and Performances awards, for TP Actors Company regulars Regina de Vera (Lead Female) and Racquel Pareno (Featured).

PETA's D' Wonder Twins of Boac, another adaptation (into a musicale) of a Shakespearean classic, The Twelfth Night, scored a double triumph for actors Cris Villonco and Shamaine Centenera-Buencamino for their Outstanding Female Lead and Featured Performances In a Musical, respectively. Both winners, however, were unable to attend the ceremonies. This musicale on mistaken identity also won for the prolific Rody Vera the award for Outstanding Original Libretto.

Ballet Philippines' modern dance production of the popular Shakespearean romantic comedy, A Midsummer Night's Dream, won the top award for its category, as well as the Outstanding Choreography for a Dance Production by Carlo Pacis; Male lead performance by Cyril Fallar, Female Featured Performance by Guia Gequinto, and the Ensemble Performance for a Modern Dance. On hand to receive the various trophies was former Miss Universe and Ballet Philippines' President, Margie Moran-Floirendo.

Trumpets' The Bluebird of Happiness, a musical adaptation of a 1908 play by Belgian playwright, Maurice Maeterlinck, with music by Rony Fortich, and directed by Jaime del Mundo, won three top awards: Outstanding Original Musical, Outstanding Production for Children (Play, Musical, or Dance), and Outstanding Ensemble Peformance for a Musical. This musical for children also won for Outstanding Set Design by Mio Infante.

Significant choices of this year's Gawad Buhay!, however, were Bart Guingona and Joaquin Valdez, of the two-character play, Red by the Actor's Actors, Inc. Guingona and Valdez won the Outstanding Male Lead and Featured Performance in a Play awards, respectively.

The revered music composer and master conductor, Josefino "Chino" Toledo, was honored for his works in the musical play about the life and times of the Katipunan Supremo Andres Bonifacio in Tanghalang Pilipino's San Andres B, which won for Outstanding Musical Direction and Original Musical Compostion.

But it was PHILSTAGE and Trumpets President, Audie Gemora's appearance as a crossdresser which brought the house down. Gemora, who won the Outstanding Male Featured Performance in a Musical Award. for Repertory Philippines' The Producers, reprised his role in a featured excerpt of the hilarious musical.

LIFETIME ACHIEVEMENT AWARDEES. Hosted by Karylle and Christian Bautista of the musical Cinderella, the three-hour presentation also showed excerpts from the other nominated musicals such as PETA's D' Wonder Twins of Boac (with Chrome Cosio and partner), TP; Sandosenang Sapatos (a solo number by child female lead, Trixie Esteban) and Ibalong (chorus); Ballet Manila's The Nutcracker, Ballet Philippines' Rock Supremo and Trumpets' The Bluebird of Happiness. Also featured was a chorale performance by The Philippine Opera Company.

As tribute to one of this year's Natatanging Gawad Buhay awardee, actor-educator Naty Crame Rogers, an excerpt from A Portrait of the Artist as Filipino by National Artist for Literature Nick Joaquin, a.k.a. Quijano de Manila was presented through the dual media of theater (featuring Liesl Batucan, as Paula Marasigan and Randy Villarama, as Tony Javier) and film (Daisy Avellana and Conrad Parham in their respective roles, directed by Lamberto Avellana).

The wheelchair-bound 90 year-old veteran theater luminary Naty Crame Rogers had to be carried to the stage to receive her special award from distinguished peers and supporters in the industry.

Naty enthused, "I always said, 'You can't be a good teacher of dramatics without being able to perform yourself... drama is life, don't you understand?"

"On behalf of those who taught me, thank you for being here to honor me," she said.

The other Natatanging Gawad Buhay! Lifetime Achievement awardee was Professor Esteban (Steve) Basilio Villaruz. He is esteemed in the theater community as an exemplary danseur-choreographer.

In his keynote address, CCP Vice President and Artistic Director Chris Millado commended everyone who made this year's Gawad Buhay! awards another success.

"This is a celebration, rather than a competition," Millado said.

"We celebrate talents... we celebrate the passion of this job, which we consider as the best job in the world!"

The PHILSTAGE Gawad Buhay! started giving out awards in 2009 and has since been recognized as the first ever industry award of Philippine theater.

Outstanding Stage Direction for a Play or Musical

Outstanding Choreography for a Dance Production

Outstanding Choreography for a Play or Musical

Outstanding Ensemble Performance for a Musical

Outstanding Production of Existing Material for a Musical (Adaptation)