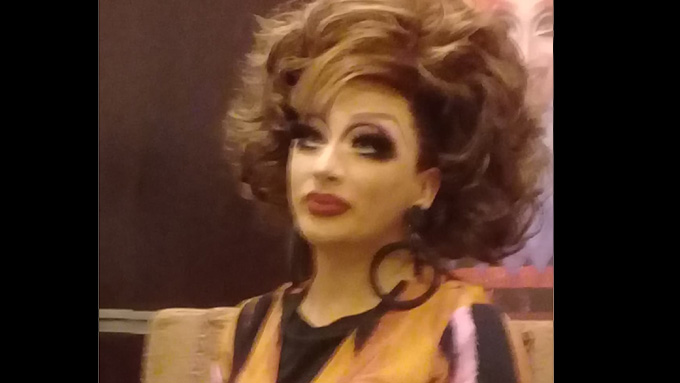 The American insult comic who performs in drag is currently in the Philippines for a show tonight at the SM Aura Premier Samsung Hall in Taguig City.

While she replied to the negative when asked by PEP.ph during her March 11 press conference if she’s familiar with Filipino humor, she said she has two longtime friends and colleagues who have Filipino roots.

“You sent me two jokes like those two to come to America,” said the 43-year-old drag queen and actor, whose real name is Roy Haylock.

“I think they’re a f**king joke. One can’t stop eating and the other can’t win a drag competition. I mean, third time’s not a charm.”

Jiggly was born Paulo Arabejo 37 years ago in Laguna province, and, at age 10, he moved with her family to the U.S.

Manila, also 37, was born Karl Westerberg to a Filipino mother and a German-Swedish father in the U.S. state of Minnesota.

(Interestingly, there are three other RuPaul's Drag Race alumni who have Filipino roots: Ongina of Season 1, Vivienne Pinay of Season 5, and Phi Phi O’Hara of Season 4 and All-Stars Season 2.)

Bianca displayed her signature biting humor in talking about Manila and Jiggly.

“I always say expect the unexpected,” she said about her shows, the latest of which are in line with her It's Jester Joke world tour.

“But since I’m in Manila, I have to talk sh*t about Manila. Not you! I meant Manila Luzon.

“It’s funny because we fight on Twitter, Manila and I… There’s a few queens that you can cackle with online, and she’s one of them.

“I’ve known her for 15 years now. So we go back and forth, and all the people online are going crazy.”

She went on mentioning a few of the comments she’s read: “I can’t believe that you said that!” “That’s so rude!” “You’re just a b*tch!”

Bianca had a lot to say about Jiggly, too.

“Let me tell you about that b*tch,” she began. “Jiggly, another one that I’ve known a good 15 years.

“Oh, god, Jiggly! She has been saying sh*t that hasn’t been in English.

"She’s been telling everyone in Manila that Bianca…

“I don’t know any of it means. And I’m worried tomorrow that someone will attack me.”

She clarified, though, “But, no, she’s been great.”

Seriously, Bianca said Jiggly, who describes herself on her social media platforms as “the Pinay Plus Size Barbie,” gave this advice: “Go, eat the food.”

“Obviously, she’d say eat the food,” she said, laughing. “Eat everything, and I’m, like, all right.”

For their part, Jiggly and Manila have posted on Twitter about Bianca’s visit to the Philippines.

Jiggly tweeted: “She's in the Philippines. Alam nyo na. Lol. Busugin ang baboy para lechonin ang gaga lol. I love you @TheBiancaDelRio enjoy my country and the people. They will treat you well. Ask for a massage with ES lol jk.”

Manila issued a warning as Bianca is known for reading, or calling out someone’s flaws in a rather catty way.

Bianca admitted that she’s never confident about her audiences, including Filipinos, appreciating her own brand of humor.

“That’s why you go into something with a huge amount of material.

“You always think, ‘They may not get it.’ So you have to work harder.”