Lea Salonga to those using phones during shows: "Don’t come to the theater" 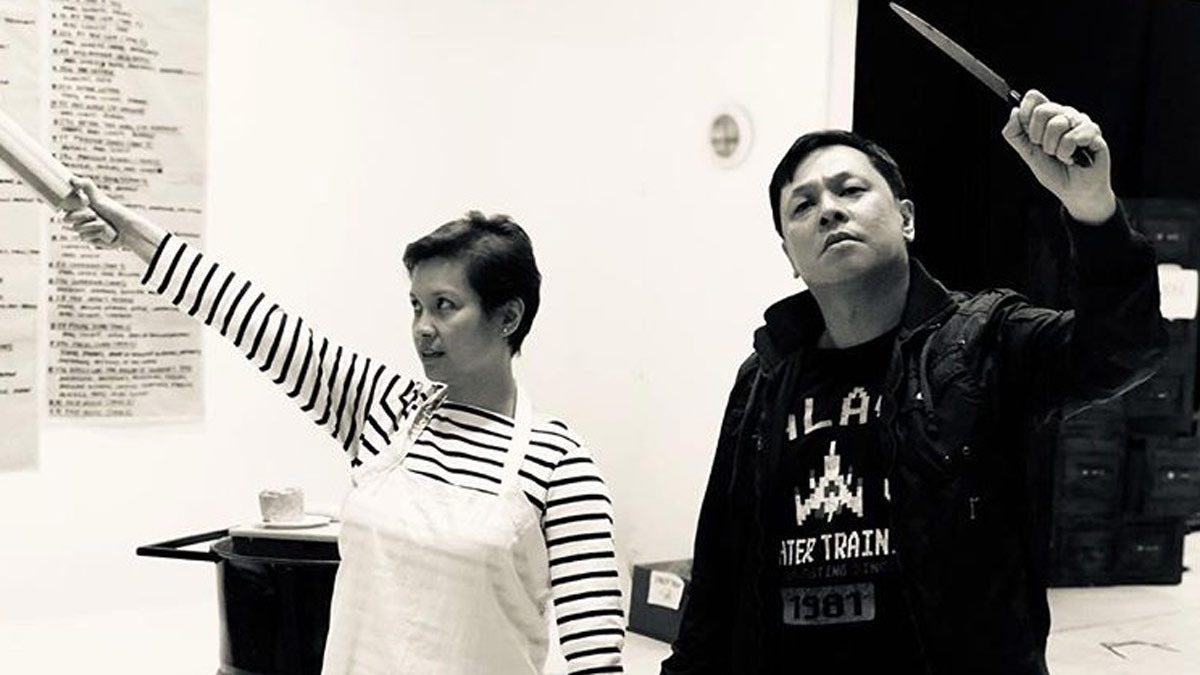 “It actually came out in the presscon, ‘Do you think fans are gonna hate you, you play a villain, you are playing a bad person?’

“I don't wanna think my fans are stupid and I don't think that they are. I think they’re gonna be able to separate me as a person from the character that I'm going to play.

“I do a lot of musical theater and I'm not always going to be the pretty girl with pretty songs and the one with the happy ending that gets her prince.

“I'm 48 and I leave that to the 24-year old to do. Now, it's nice to be able to do, to play interesting human beings. To step into the shoes of someone who will do this kind of things.

“It was said by one of the guys in the cast, everybody has a dark side, no exemption."
Nakausap si Lea ng PEP.ph (Philippine Entertainment Portal) at Cinema News nitong October 2 sa The Theatre Cafe @ Solaire.

“Given what this is, do your research na lang before buying your tickets. A couple of my daughter's classmates, the parents already knew going in, this is Sweeney Todd, ‘We’re not gonna bring the kids.’

“They already know what this is, this is not meant for small children. Even though I'm in the show, it doesn't mean it's gonna be a wholesome show.

“I urge the audience to research on the shows you wanna see to make sure it's appropriate for your children before you bring your kids.

“My 13-year old daughter refuses to see this one. Yeah, you have to police for the sake of the kids. You don't want them to be traumatized because of the show."

“It's the 40th anniversary of Sweeney Todd. The very first production of it was in Broadway 1979.

“Forty years ago, audiences of Broadway got to met the demon barber of Fleet Street. So many productions had produced it on stage, I think it's even translated in different languages.

“It's fantastic, Atlantis is in its 20th season, 20th anniversary, it coincides with Sweeney Todd’s 40th, so this becomes the company’s season ender.

“I'm so happy that audiences in Manila will get to meet these people, and they are despicable people but so much fun to play."

“Oh my God! His voice is so unique, I’ve never heard anyone sing like him,” bulalas ni Lea.

“I’ve traveled the world and I've never heard someone sing that seems close to that. It's a very unique instrument and the one perfect for this score.

“He uses it to full range, texture and the sound he produces so effectively as Sweeney, and he is terrifying.

“There's one song that he does, it's called Epiphany which is second to the last song in the first half.

“It's when Sweeney starts to realize that he has to get his revenge but he's going to start killing a lot of people. He says things to the effect, ‘Not even how many throats that I slash will be able to make me feel like I avenge my wife, and my daughter.’

“You see him transformed into that blood thirsty human. I got to be maybe five feet away from him as this was happening, and watching him as dictated by the script, I just got to sit there and be a Jet Pangan fan for like 2-3 minutes.

“I was still in the character appreciating what this actor is able to do and the emotions he’s able to convey, and the voice that comes out of that body.

“He's just... I'm lucky that he was looking at me with those demented eyes. I'm extremely fortunate to get to work with him."

LEA GETS UPSET OVER PHONE DISRUPTION

"If you can’t stay off your phone for a few hours, do us all a favor and don’t come to the theater. Not only are you a distraction to the actors, but you’re also a nuisance to the other patrons sitting around you that actually want to be there.

"If you’re only going to show off that you can afford it, but don’t actually possess the manners, keep your arse at home.

"We’ve been trying so hard with the cellphone advisories on social media and in the theater. And even with our own unique take that happens just before the orchestral downbeat.

"Our ushers are also working hard, telling you twice to put your phone away. TWICE! But you’re just either too dense or entitled to think that it applies to you, it seems." 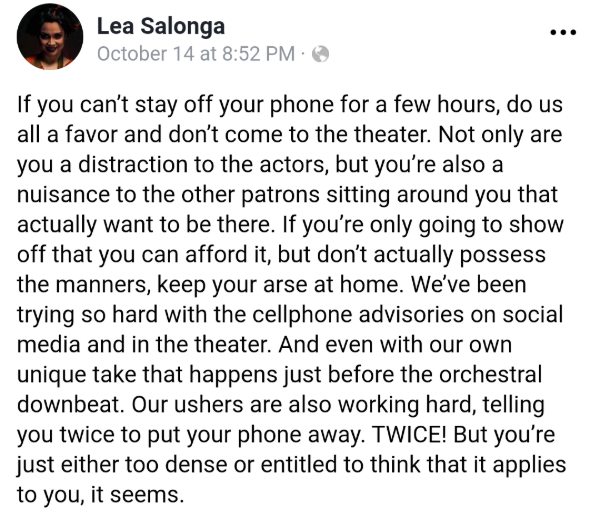