Karylle paired with Christian Bautista in "West Side Story" 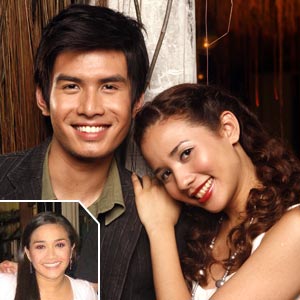 Karylle will act opposite Christian Bautista in STAGES' production of West Side Story this September. Alternating as Maria in this Broadway production is Joanna Ampil (inset), a Filipina who has been appearing in West End plays since she was 17 years old.

GMA-7 artist Karylle alternates with West End theater actress Joanna Ampil as the leading lady of Christian Bautista in the local production of West Side Story. STAGES presents this Broadway musical about feuding New Yorkers and Puerto Ricans at the Meralco Theater from September to October this year.

Set in the Manhattan's upper West Side, this stage play tells the tragic love story of a Polish boy named Tony (Christian Bautista) and a Puerto Rican lass named Maria (Karylle or Joanna).

STAGES Senior Public Relations Officer Oliver Oliveros recalls: "Karylle auditioned on the second day, after [GMA-7 noontime show] SOP. Kasi that was a Sunday. She came really, really nervous. It's family there, magkakakilala, but she really felt nervous. We asked her to sing a bar, the highest note of ‘Tonight,' one of the chorus numbers in West Side Story. Meron kasi yung duet nito, meron yung chorus number. She had to hit the high C, she was able to hit it naman, pero siyempre kinakabahan siya. After the audition, hindi pa siya sure if she got the role. We offered the role to her after we offered the role to Joanna Ampil."

Oliver points out the qualities that made Karylle stand out in the competition. "Among those who auditioned, when she stepped into the room, alam mo na puwede siya," he says. "Mararamdaman mo talaga na she exudes youthness, and at the same time, she has a classical voice. Then I asked one of the people in STAGES, ‘Is she studying classical?'

"All she needs now is vocal coaching just to be sure that she hits the notes. It's very different when she's singing classical. It's something that will be surprising to everybody, kasi we're so used to Karylle singing pop songs, but she sings classical. Kami rin nagulat."

The panel of judges was composed of STAGES president Audie Gemora, Menchu Lauchengco-Yulo who's co-directing West Side Story with Audie, and Jamie del Mundo.

Karylle's theater debut was the stage play The Little Mermaid, produced by Trumpets, and she was last seen onstage for Atlantis Productions' Seussical.

JOANNA AMPIL. Without formal drama training, Joanna was chosen to play an alternate for the role of Kim in the West End production of Miss Saigon way back in 1993. Since then, this Filipina has made her kababayans proud by playing key roles in West End plays such as Jesus Christ Superstar and Rent.

Oliver narrates how Joanna was able to audition for the role even though she is currently in London playing Fantine in Les Miserables.

"Very much interested si Joanna, sabi niya sa amin, ‘Very appealing yung Maria na ‘to sa akin, and I hope I can audition, even though I'm in London.' So she sent over a track from her album. It's a cover of the song, ‘Think of Me,' from the Phantom of the Opera. Christine [her character] is a soprano role din. Wow, she blew us away. Ang ganda-ganda nung version niya ng ‘Think of Me.'

"She hit the right notes, and siyempre, we want to give her the time to shine here, since hindi pa siya nagkakaroon ng legitimate play in Manila. She's looking forward, she's coming back to do theater here after fifteen years in London. She's done a lot of roles there, Eponine, Mary Magdalene in Jesus Christ Superstar, Kim in Miss Saigon. Ang dami ng roles, and ito yung latest, Fantine in Les Miserables."

See Karylle and Joanna Ampil do soprano numbers in STAGES' production of West Side Story, which is slated to run from September to October at the Meralco Theater.