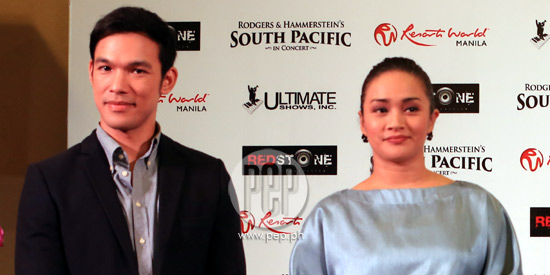 Rodgers & Hammerstein’s South Pacific will be staged at the Resorts World Manila for two Saturdays this September. However, this will not be a full performance of the musical but a musical in concert.

Director Menchu Lauchengco-Yulo explains that it is an adaptation of a concept from the New York theater scene.

“I said, ‘Let’s do something that hasn’t been done here.’ For us to make this work, we had to choose a song where every song is kilala [familiar]. South Pacific is the perfect musical for this.”

South Pacific in Concert will be staged at the Newport Performing Arts Theater in Resorts World Manila on September 12 & 19 at 8 pm.

The story, based on James Michener's Pulitzer Prize-winning novel Tales of the South Pacific, tells the story of various characters in the famous islands.

“It is very hard to stage because of the racial issues [in casting],” Yulo says. “But in concert, you don’t have to cast accordingly. This will open the door for us to do other musicals where the music is beautiful.”

South Pacific is set during World War II against a backdrop of racial prejudice—but ultimately, it is a love story.

“It’s a very touching story. It is still ultimately a love story, about self-discovery,” says Ampil, who is best known for playing Kim in the West End version of Miss Saigon. “Everyone loves a love story!”

Vera Perez, by now a veteran of American and Philippine stage, points out: “Although the show was written in 1949, the story is as relevant today as ever.”

The massive Manila Philharmonic Orchestra—under the baton of Maestro Rodel Colmenar—will play the many familiar songs from the musical: “Bali Hai,” “Some Enchanted Evening,” “There is Nothing Like a Dame,” “Happy Talk,” “Younger Than Springtime,” “I’m in Love with a Wonderful Guy,” “Bloody Mary,” “I’m Gonna Wash That Man Right Outta My Hair,” “This Nearly Was Mine,” among others.

Yulo says: “That is why I specifically said: ‘Let’s do South Pacific.’ We bring it to a new generation of kids or people who don’t even know that these familiar songs came from the musical.”

The script is abridged, with the scenes from all the songs included, to give context and to make the story clear to the audience.

Though there will not be any elaborate sets, visual support will be provided through the large LED screen at the Newport Performing Arts Theater. Though the emphasis will be on the singing, Ampil assures: “There are no compromises in terms of acting.”

Yulo adds, “It’s a lot of experimenting. I love experimenting! If it’s a success, I’m happy; if not, then at least, it’s a start. If puwede pala, we can do more.”

“A lot of people, like the younger generation, have no idea about the older musicals. I want them to be exposed. It is a way to bring the musical to that generation.”