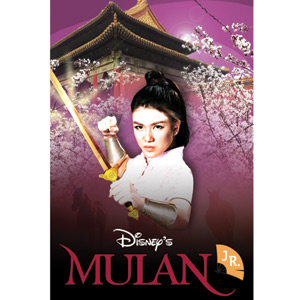 Repertory Philippines will stage Disney's Mulan (Jr.) from August 9 to December 17 at the Onstage Theater in Greenbelt One. Cris Villonco, Cara Barredo, and Caisa Borromeo will alternate for the title role.


After a smashing theater season that had four exciting productions—Tuesdays with Morrie, Hamlet, Romance in D, and Altar Boyz—Repertory Philippines turns to musicals on a grand scale for the second half of its theatrical year.

Mulan is based on the Disney film of the same name and features the same songs, including a song that has become a pop favorite titled "Reflections." The stage version was written especially for young audiences by Patricia Cotter with music and lyrics by Matthew Wilder, David Zippel, Stephen Schwartz, Jeanine Tesori and Alexa Junge with music adapted and arranged by Bryan Louiselle. Mulan is a production of REP'S Children's Theater, which has featured musicals in the past for young audiences as Cinderella, Alladin (Jr.), Pinocchio, Sleeping Beauty, and many others.

The theater version of the Disney hit features some of REP'S most seasoned and accomplished actors including Cris Villonco, Cara Barredo, and Caisa Borromeo alternating in the role of Mulan; PJ Valerio, Reuben Uy, and Felix Rivera alternating in the role of Chang; and Red Concepcion, Robbie Guevara, Rem Zamora and Chevy Mercado alternating in the role of Mushu, the "Dragon Wanna-be." Supporting them will be a strong cast of veterans and talented newcomers. Mulan is based on a real-life Chinese legend about a young girl who proves that with courage, intelligence and determination, a girl can bring honor to her family as much as any boy.

Mulan is directed by Joy Virata with choreography by Denisa Reyes and sets and costumes by Niki Torres.

A Christmas Carol is based on the Charles Dickens classic and was chosen by REP to allow families and people of all ages to get into the true Christmas spirit of peace, joy, hope and love by enjoying this beautiful story. It is the story of Ebenezer (Bah! Humbug!) Scrooge who hates Christmas but through the Ghosts of Christmas Past, Christmas Present and Christmas future, he discovers the true meaning of Christmas. The lonely old man also catches the jolly Yuletide spirit through the help of Tiny Tim and the Cratchit family.

REP has staged this musical twice before in different versions. This time it uses the version that features music by famed Broadway composer Alan Menken (Little Mermaid, Aladdin, Beauty and the Beast) and his equally well-know lyricist Lynn Ahrens. It is a version that has been staged many times in the famous Madison Square Garden in New York and has been made into a movie.

Audie Gemora and Michael Williams will alternate in the role of Scrooge. A Christmas Carol will also feature a full, live orchestra courtesy of the Manila Symphony Orchestra. This is a production not to be missed. It will be directed by REP's artistic director Ms. Baby Barredo and veteran actor Robbie Guevara.

Both Mulan and A Christmas Carol offer opportunities for fundraising, advertising sponsorships and corporate Christmas treats for employees and clientele.

Special showings and group sales are available at very discounted rates. Call 8870710 for information about the upcoming productions, show sponsorships, and about REP itself. Tickets are also available to Ticket World (Tel. No. 891-9999).