"West Side Story" restaged in Manila after 27 years 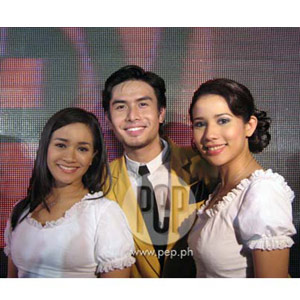 West Side Story is topbilled by (from left) Joanna Ampil, Christian Bautista, and Karylle. This Broadway play will be staged at the Meralco Theater from September 5 to October 12, 2008. Click HERE to buy tickets to West Side Story.


Last August 20, mall goers of TriNoma in Quezon City were treated to snippets of the play West Side Story at the mall's activity center. For avid theater goers, the restaging of the Broadway play has been long overdue.

This full-length musical will be staged at the Meralco Theater from September 5 to October 12, exactly 27 years after Filipinos first watched the play in 1981. This highly anticipated revival in Asia also precedes a new Broadway production in 2009.

When PEP (Philippine Entertainment Portal) asked Christian Bautista to describe how it was like to be a leading man to two ladies, he said, "Wow! I'm a very lucky man. It's great ‘cause I can really connect to both of them in such different levels. We help each other and we really have great chemistry."

He later adds: "When you have two talented ladies like these, beautiful, talented, it's not hard at all!"

NINE KISSING SCENES. According to Christian, he has nine kissing scenes with his leading lady (alternately played by Karylle and Joanna).

Karylle admits that, being a conservative person, she had difficulty doing the kissing scenes for the play. "Actually nahirapan talaga ako, uhm, you should have seen them copying me. Dati, sa Little Mermaid [her first theatrical play], wala namang kissing scene dun. Yung hug namin ganito kalayo [she demonstrates being a foot away from the other person]. Hug pa lang, ha!

SYNOPSIS. West Side Story transports the classic tale of William Shakespeare's Romeo and Juliet to the turbulent streets of the Upper West Side in 1950's New York City. Star-crossed lovers, Tony (Christian) and Maria (Karylle or Joanna), find themselves caught between the rival street gangs of different ethnic backgrounds, the "Jets," led by Riff (Magdangal), and the "Sharks," led by Bernardo (Macapagal or Singson). The young lovers' struggle to exist together in a world of violence, hate, and prejudice is one of the most heart-rending, relevant, and innovative musical masterpieces originally conceived for the stage by director and choreographer Jerome Robbins.

West Side Story highlights the many show-stopping numbers, and immortal songs of Leonard Bernstein and Stephen Sondheim, like "Somewhere," "Tonight," "One Hand, One Heart," "America," and "Something's Coming."

While the new Broadway production is said to present the "Sharks" speaking and singing in Spanish, Ms. Yulo says that the local production is staying true to what West Side Story was in 1957. It will re-create Jerome Robbins' choreography, delivering it as it was originally written.

The director challenges her cast to come up with extremely organic characters though. "My actors attack their characters in a more real, more edgy manner as compared to the musical's movie version. I don't set rules and tell them what to do during rehearsals. I take it on how they give it," shares Yulo. "I don't expect Karylle's Maria will be like Joanna's, for instance. I don't make them copy each other, but I still make sure that there's not a great disparity in their performances."

Click HERE to buy tickets to West Side Story.