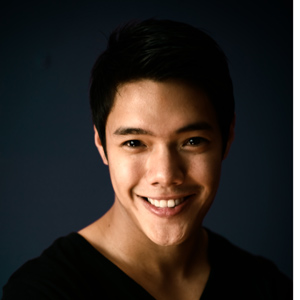 Joaqui Valdes topbills The Male Voice, a play that is the 15th anniversary offering of the New Voice Company. It will have alimited run at the RCBC Plaza on May 22, 23 and 31.

After his much-lauded performance in New Voice Company's Into the Woods in 2007, it seemed Joaqui Valdes will be the next big thing in Philippine theater. But in 2008, instead of focusing on his career as a stage actor, Valdes focused on other artistic endeavors. He co-hosted the now defunct 100% Pinoy with Miriam Quiambao on GMA-7 and even had a small role as Jolina Magdangal's brother in I.T.A.L.Y. His short film, Bulong, won the Golden Duck award at the 2nd New Beijing International Movie Week and was screened at the Cannes Film Festival.


This year, however, sees the return of Joaqui the theater actor. After starring in Dulaang UP's Ang Kiri for the UP Sarsuela Festival last February, he returns to New Voice for The Male Voice, the company's 15th anniversary offering.


Written and directed by NVC associate artistic director Rito Asilo, The Male Voice is a series of monologues that tackles the life and the psyche of the Filipino male, covering all walks of life, from macho dancers and male prostitutes to priest and soldiers, among others. Based on interviews from real people, The Male Voice is the first time NVC will stage an original production. It also stars Tommy Abuel, Michael Williams (who also starred in Into the Woods), and Joel Trinidad.


AFTER BULONG. For Valdes, the opportunity to work on The Male Voice came at the most appropriate time, especially after concentrating on directing for the past year. According to Joaqui, his experience with Bulong made him realize directing is his vocation. Bulong also made him want to "create more works that push and challenge the people, that will move their hearts." This was after he saw foreigner viewers respond to Bulong, a 30-minute film he described in a previous PEP interview as a speculative tale "about a city where everybody is unconsciously controlled or made to believe that they are free, but they all follow a routine day in and day out."


But Valdes doesn't plan to turn his back on theater just yet. In fact, The Male Voice is exactly the kind of material he prefers to do as an actor. Although he considers musical theater as his guilty pleasure, something he has been doing since he started out as a stage actor and something he would do simply because he enjoys it, Valdes wants his art to go beyond that.


CHALLENGING ROLES. In The Male Voice, Valdes will perform a number of roles: as a former macho dancer and as a son who found out his mother was abused by his grandfather. The Male Voice is unlike most of the productions he has done in the past, a fact that scares him and challenges him at the same time. For one, he hasn't done a monologue in his entire career, and he feels the pressure of being able to sustain the interest of the audience of the entirety of his piece.


On one of his monologues, he said: "It's a challenge. Thing is, I told Rito Asilo, if I pull this off, it's gonna be really good. There's nothing less than excellence, you really have to pull it off, eh. Kasi, if you don't, the whole thing suffers.


However, he sees this challenge as a necessity in his career as an actor.

"As an actor, you have to try new things... But what differentiates you from an entertainer and an artist is an artist feels stretched and you'll eventually tackle material na takot ka. One of the best advice a director gave me was you have to do roles that you're afraid of. Ito, isa ito, kasi sobrang nakakatakot itong material na ito kasi ayaw mong i-misrepresent yung interview, you want to remain faithful to the actual person," said Joaqui. "Ang pinaka-challenge sa amin, apart from portraying these interviews well, is portraying it through, portraying it realistically, para lumabas talaga yung pinakaka-totohanan ng mga interviews na ito."


"Takot ako, but at the same time, I feel challenged by it. And as an artist, you have to be challenged," pointed out the actor.


The Male Voice is the second time that Joaqui worked with Tommy, Michael and Rito after Into the Woods. "It's such an honor to be working with theater greats, like Tommy and Michael and Joel, because I'm the youngest and they've been in the industry for so long," he said.