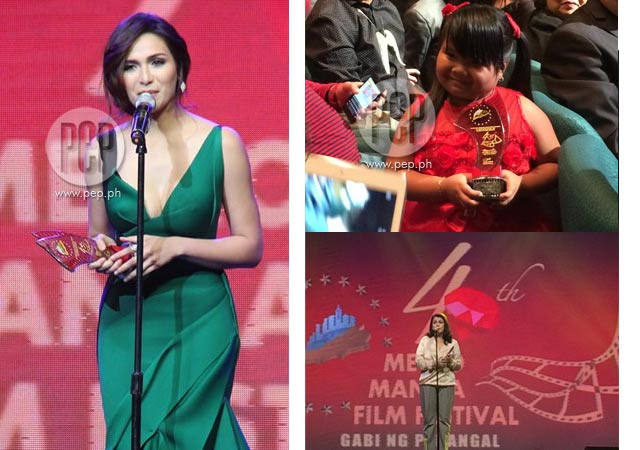 Derek Ramsay was named as Best Actor for English Only, Please while his leading lady Jennylyn Mercado bagged the Best Actress trophy.

Jennylyn was seen crying backstage after she accepted her acting award for her role as a tutor in the romantic comedy film.

Joey Marquez was also unable to personally receive his award as Best Supporting Actor for his role in Kubot: The Aswang Chronicles 2.

Lotlot de Leon, his co-star in Kubot, was also moved to tears when she received the Best Supporting Actress award.

Since Vice Ganda's grandfather passed away last December 25, Edu Manzano was chosen to serve as the co-host of Kris Aquino during the MMFF 2014 Gabi ng Parangal.

Kris, the lead actress of Feng Shui, told the crowd that it was enough for her to know that her son Bimby was included in the list of nominees that night.

Her youngest son is part of the comedy film The Amazing Praybeyt Benjamin, which was the top-grossing film on Christmas Day, December 25.

The founders of the MMFF and the New Wave category were also recognized during the awards night.

Former President Joseph Estrada received the Commemorative Award for Vision and Leadership as did MMFF and MMDA Chairman Francis Tolentino. The late Guillermo de Vega was also given a Memorial Award that was accepted by his wife Maria de Vega.

It will be recalled that in 1975, Joseph Estrada sought the help of the late Guillermo de Vega to create the Metro Manila Film Festival.

(To learn more about the MMFF 2014 mainstream entries, CLICK HERE)