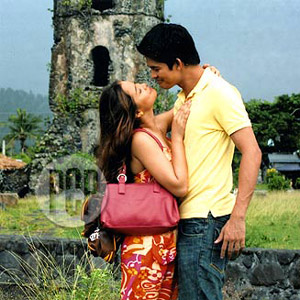 Aris (Jason Abalos) and Kat (Maja Salvador) engage in a love-hate relationship in the Regal Entertainment movie My Kuya's Wedding. This romantic comedy will screen in cinemas nationwide starting August 29, 2007.

Maja Salvador and Jason Abalos light up the big screen with their amazing chemistry as they portray warring teenagers on the brink of falling in love. Jason plays a reality show contestant whom Maja hates. Unfortunately, she's going to be seeing him quite often because he's also the brother of Pauleen Luna who is going to be Maja's sister-in-law. When Maja and her brother played by Ryan Agoncillo, go to Bicol for the "pamamanhikan," more conflicts and tension-filled situations occur between Maja and Jason's characters.

My Kuya's Wedding from Regal Entertainment is the second movie of Maja and Jason together. Previously, they made waves in Star Cinema's First Day High.

On their own, the two have been praised for their great acting skills. Maja, grand-slam Breakthrough Star in the Guillermo Mendoza, YES! magazine, Entertainment Press (Enpress) and Star Awards, wowed TV audiences when she starred in a very dramatic episode of Maalaala Mo Kaya with no less than Star for All Seasons Ms. Vilma Santos. She is also a favorite of director Chito Roño who has worked with her in the TV series Spirits and the box-office horror hit Sukob.

Recently, Jason was part of the 2007 Cinemalaya's Jury Prize winner Endo (which is short for "end of contract"). In this indie movie, he portrayed the role of Leo, a struggling worker whose life has been a series of short-lived jobs and even shorter relationships.

"They've got great rapport on and off screen. Nagkukulitan sila!" reveals Topel Lee, the director of My Kuya's Wedding. He reports that Jason and Maja often share food during breaks in shooting.

Maja is from Aparri, while Jason is from Nueva Ecija.

Asked if she gets jealous of the girls who are linked to Jason, Maja laughs, "Hindi! Mas maraming nail-link sa akin!"

Watch for their sweet and funny scenes in My Kuya's Wedding, especially the parts they shot in lovely Bicol. The stars and the staff of the movie went to Bicol twice to shoot in the province's most scenic locations. Viewers should watch for breathtaking shots of the world famous Mayon Volcano. The result is a film that definitely tickles the funny bone and captures the heart.