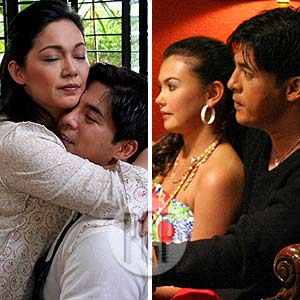 "Who is the mistress? Who is the wife?" Thus goes the tagline of the movie A Love Story starring Aga Muhlach, Maricel Soriano (left frame), and Angelica Panganiban (right).

Originally titled I Don't Want You To Go, the Star Cinema film A Love Story is a complicated, character-driven movie that dares question why people cheat on their partners. Instead of presenting the characters and their actions in black-and-white terms, they are shown in gradients of gray, allowing the audience to empathize with the three characters who are destined to suffer heartbreak.

Directed by Maryo J. de los Reyes, A Love Story dissects the anatomy of infidelity and explores this mature topic with an open-minded and creative approach. The non-linear style of storytelling keeps the viewer riveted to the story even though the plot twists and turns in a span of two hours. Watching the dramatic lives of the three main characters—the husband, the wife, and the mistress—is similar to riding an emotional roller coaster with highs and lows in every turn.

THE PLOT. Ian Montes (Aga Muhlach) is a successful man who is struggling with his feelings of inadequacy and abandonment issues. He is emotionally scarred by the fact that his mother left them at a young age, leaving him to care for his father (played by Dante Rivero) who eventually develops Alzheimer's disease.

Ian is determined to earn his father's approval, although he has not yet forgiven him for welcoming back his mother after abandoning them in the past. The ghosts of his past haunt him and only when he learns to forgive will he able to grow up and face the future with his family.

When Ian meets an accident while wakeboarding in Batangas, he is nursed back to health by Dr. Joanna Villanueva (Maricel Soriano). The OB-Gyne is successful in her own right and is wary of falling in love again after she herself suffered heartbreak because of her ex-husband Peter (Mark Gil).

But then there's Karyn.

The liberated flight stewardess whom Ian met in Macau is played to the hilt by Angelica Panganiban. Karyn adds spice and spontaneity to Ian's routine. Her unique mix of feistiness and sensuality makes her very desirable but her erratic schedule puts a strain on her relationship with Ian.

Ian's father has always told him, "Ang babae, parang bulaklak yan. Huwag mong pipitasin kung ‘di mo aalagaan." Too bad that Ian did not heed his dad's advice and now he is caught between two women who are head-over-heels in love with him.

THE VERDICT. Aga Muhlach's efforts to whip his body back into shape are well-appreciated. It lends much credibility to his role as a man who is being pursued by two women who seemingly cannot live without him.

Maricel Soriano's acting is just right for the movie—neither over the top nor too subdued. The Diamond Star remains as lustrous as ever even when she is pitted against one of the freshest faces in showbiz—Angelica Panganiban. It is interesting to note that Maricel previously played a mother to the former child star in the 1996 movie Ama, Ina, Anak. Eleven years later, Maricel and Angelica are cast as rivals for the affection of the same man.

A voluptuous Angelica had no qualms about baring her assets in a steamy swimming pool scene that can make her FHM pictorials seem tame in comparison. When she pleads with Maricel, "Hindi mo siya kailangan, kailangan ko siya," shivers ran up my spine.

A Love Story does not condone infidelity but it does bring to light the dynamics of husband-wife relationships threatened by the inclusion of a third party. Instead of turning a blind eye on temptations such as these, the movie bravely showcases how illicit relationships affect all parties concerned and even their family members who are aware of the situation.