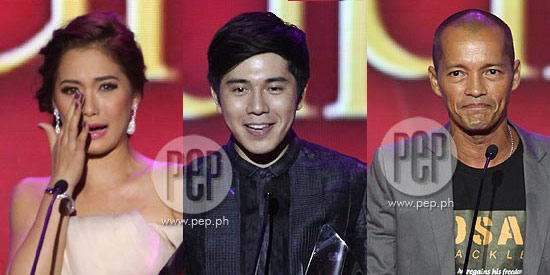 The 35th Gawad Urian awards ceremony was held last June 13 at the AFP Theater, Camp Aguinaldo in Quezon City. It was a mix of indie and mainstream--indie films may have dominated the nominations, but mainstream actors took home some of the top awards.

The 35th Gawad Urian covered all movies released in the Philippines in the past year, whether indie or mainstream. Judging them is the Manunuri ng Pelikulang Pilipino, a 10-member panel composed of film scholars, critics, and industry insiders.

Ang Sayaw ng Dalawang Kaliwang Paa was part of the 2011 Cinemalaya Philippine Independent Film Festival. The movie is about Marlon (Paulo Avelino) a college student who falls in love with Karen (Jean Garcia), his literature professor. Learning that Karen also heads a dance class, Marlon enlists the help of his classmate Dennis (Rocco Nacino) to teach him how to dance. Later on, Marlon gets attracted to Dennis.

Two actors from the indie film also took home top acting awards. Best Supporting Actress went to Jean Garcia, while Best Actor went to Paulo Avelino. Both are more popular for their work in the mainstream.

Jean Garcia was not present in the AFP Theater when her name was called, and it was young actor Alwyn Uytingco who received her award. Alwyn, the boyfriend of Jean's daughter Jennica, told the audience that the actress was in a taping.

Paulo Avelino was a little surprised when his name was called. He even blurted a swear word once he got onstage. In his speech, the Kapamilya actor thanked the movie's cast and crew, and said the award will be an inspiration to him.

Maja Salvador, another Kapamilya personality, took home the Best Actress award for her performance as a young marathon runner in the indie film Thelma. She was emotional when she received her award.

Jean, Paulo, and Maja were not the only mainstream actors who vied for top acting awards. Kapuso talent Solenn Heussaff, who was in the audience for most of the program, was nominated for Best Supporting Actress for her work in Regal Films's 2011 Metro Manila Film Festival (MMFF) entry Yesterday, Today, and Tomorrow.

But it was indie and theater actor Art Acuña who took home the Best Supporting Actor tropy for his work in Niño.