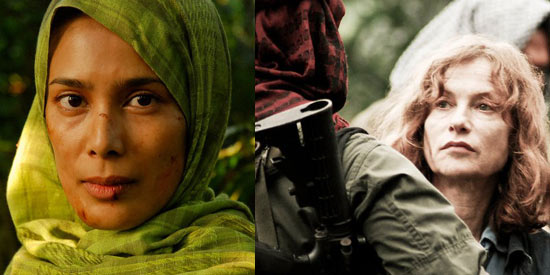 Captive stars French actress Isabelle Ruppert (right) as well as Filipina actress Angel Aquino (left). They are joined by a roster of Pinoy talents: Sid Lucero, Ronnie Lazaro, Raymond Bagatsing, Maria Isabel Lopez, Mercedes Cabral, Mon Confiado, and Che Ramos. Screened in competition at the 2012 Berlin Film Festival, Brillante Mendoza’s film takes the audience from the abduction at the Dos Palmas Resort, Palawan to the cross fires between the AFP and the A

In Brillante Mendoza’s Captive, real news is translated into reel. The plot of this 62nd Berlin Film Festival entry takes off from the infamous 2001 Dos Palmas incident where 17 Filipinos and 3 Americans—including Gracia and Martin Burnham— were abducted by the Al Qaida-affiliated Abu Sayyaf.

The director’s realistic portrayal of the plight and trauma of the hostages is key in Captive. If anything, Brillante’s screenplay translates into the screen as a documentary more than a film on the kidnapping.


The characters of the film, while their names are changed, are based on the real captives in Dos Palmas. Only French actress Isabelle Huppert’s character, Therese Bourgoine, a head strong Christian aid worker, is an added factor in the film. Therese’s point of view as a foreigner is essential as she becomes the neutral party among the group of Filipino Christian hostages and Filipino Muslim Abu Sayyaf.

In an interview, Captive’s director mentioned that he particularly chose to use the Dos Palmas incident as material for his film because it concerns political and social issues, in particular the long battle of the Philippine government with the Abu Sayyaf. Captive exactly captures the hostility that takes place in Mindanao and in the film, the audience is presented the bloodshed and casualties in every crossfire that transpires between the Armed Forces and the group of bandits.

Captive is a Filipino-French production that presents a roster of Filipino talents. Angel Aquino for one, plays Olive, a nurse from Lamitan who gets caught up in the scene. Trying to flee the Philippine army, the Abu Sayyaf and the hostages seek shelter and food in a poorly maintained hospital in Lamitan. The group burst into the hospital, ransacking food and endangering the lives of the patients.

A poignant scene in the film is when a crossfire occurs between the Abu Sayyaf and the Philippine army in the hospital. In the middle of the warfare, a local couple arrives at the hospital with the pregnant woman experiencing contractions. She is about to give labor. Olive, together with a doctor and group of nurses (including Alan Paule and Che Ramos), help the woman give birth to her child whilst bombs and guns firing.

“What was most challenging for me ay yung nagdeliver ako ng baby! My god! And it was captured on film, I’m very proud of that! Isa ito sa mga magical moments na ginawa ko.”

Captive is Angel’s second independent film with the director. She first acted in Brillante’s Kaleldo (2006).

The FAMAS and Gawad Urian-nominated actress believes in Brillante’s skill in directing his actors.

“He comes up with the best stories naman… He always challenges his actors.

“He is really collaborative! He [wants] the actors to know and understand what they have to do for the movie.”

Apart from reading up on the Dos Palmas hostage taking that lasted for almost a year, Angel had some profound internalization to do in order to connect with her character.

While in captive, Angel’s character is forced to marry one of the Abu Sayyaf bandits played by Sid Lucero, despite her having kids and being married to a Catholic man.

Her character Olive is also being forced to convert to Islam after marrying the Abu Sayyaf bandit.

Despite the hardships of shooting the film, Angel takes delight in the success of the film, more so, getting to work with Isabelle Huppert whom she thinks highly of.

“She [referring to Isabelle] was very pleasant and gracious to work with! Grabe! Saka magaling talaga siya.

“She’s very sensitive… I believe she deserves an award here. It was shown in this movie. She is very, very good. You really feel her [in] every moment.”

Will she collaborate with Brillante for the third time sometime in the future? While she humbly shrugs off being one of the award-winning filmmaker’s favorite actresses, Angel expresses her support for the Cannes award-winning director.

Captive is slated to have a red-carpet screening on September 3, 2012. The film is scheduled to open in Philippine cinemas by September 5, 2012.