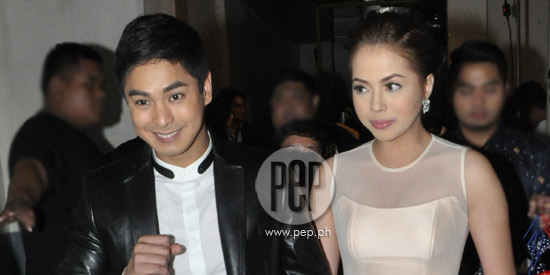 Coco Martin and Julia Montes are the lead stars in the light romantic drama A Moment In Time.

"Coco Martin and Julia Montes’ first big screen team up via A Moment In Time continue to enchant moviegoers nationwide as the graded ‘B’ film earns more positive feedback from the public. Now on its third week, A Moment In Time keeps on winning the hearts of viewers because of its beautiful story and the revelation of the ‘new sides’ of Coco and Julia as actors, who surprised fans with their back-to-back-to-back sweet moments that were made sweeter by their memorable kissing scenes.

"Aside from the regular showing in cinemas across the Philippines, A Moment In Time now has an exclusive pay-per-view on The Filipino Channel (TFC) in all Middle East countries except in United Arab Emirates (UAE), Qatar and Bahrain. The Coco-Julia starrer will be shown on TFC from March 7 to March 10 at 12nn, 3pm, 6pm, and 9pm.

"A Moment In Time is a modern love story of Patrick (Coco) and Jillian (Julia) who went through different trials that measured their love for each other. Produced by Star Cinema and directed by Emmanuel Palo, also featured in A Moment In Time are Zsa Zsa Padilla, Cherie Gil, Gabby Concepcion, Ella Cruz, and the twins from Pinoy Big Brother Teen Edition 4, Joj at Jai Agpangan. Don’t be left behind, rush to the nearest cinemas and watch Coco and Julia’s first movie, A Moment In Time."