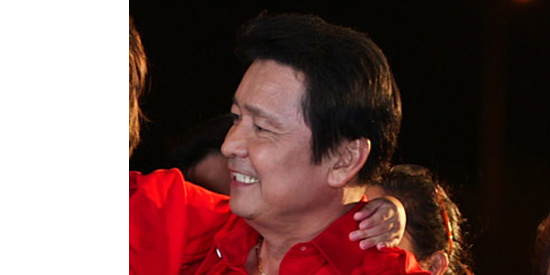 
Both awardees will receive the said prestigious honors during the 29th PMPC Star Awards for Movies to be held this Sunday, March 10, 2013 at AFP Theater, Camp Aguinaldo, Quezon City.


Aside from the awards in different categories being given to the best films and performances of the previous year, the PMPC also acknowledges a person whom the club believes to be worthy of the highest form of Nora Aunor Ulirang Artista Achievement Award.


Starting this 2013, the PMPC is attaching the name of Ms. Nora Aunor to the Ulirang Artista Lifetime Achievement Award to give due recognition to her. Aside from her being an icon of Philippine cinema, the Superstar has generously sponsored this award, from the start /conception of giving the said honor in 1986 with Ms. Mary Walter as the very first recipient, in collaboration with the PMPC.


After a thorough deliberation, the PMPC unanimously chose Senator Lapid to be this year’s recipient of the said highest accolade.


According to the PMPC, Senator Lapid was chosen because of "his body of work, achievements in Philippine movie industry as a box office action star and film producer, credibility as a seasoned artist, and because he has touched the lives of Filipinos."


Before becoming a politician, Lapid started out as a production technical worker (camera caretaker) of the old LVN Productions (during the time of Fernando Poe Sr.). He became a movie extra and a stuntman / fight instructor before becoming an action superstar as well as a film producer. He later on became Pampanga vice governor then he was elected as governor until he became a Senator of the Republic of the Philippines.


Senator Lapid was discovered by the late Pablo S. Gomez (in one of the films as a stuntman) who then recommended Lapid to film producer Jessie Chua of Mirick Films to launch as an action star in Jess Lapid Story (1978) -- after years of being a movie bit player, stuntman, supporting character from 1961.


The Filipino masses loved Lito Lapid as a box office action superstar during the '70s and '80s. His most popular character was Leon Guerrero, which became a string of blockbuster action movies.


He has worked with the biggest names in the industry, namely: Fernando Poe Jr in Kalibre 45, with Nora Aunor in Kastilyong Buhangin, with Vilma Santos in Yakapin Mo Ako Lalaking Matapang, with Dolphy in Da Best In The West (two parts), among others.


Another recipient of a Lifetime Achievement Award is master cinematographer Romy Vitug. He will receeive the Ulirang Alagad ng Pelikula sa Likod ng Kamera, given by the PMPC to deserving individuals behind the camera – director, screenwriter, cinematographer, producer, etc.


When it comes to cinematography, the PMPC "salutes Vitug’s fabulous track record, remarkable achievement, and contributions on this aspect of filmmaking."


As an award-winning cinematographer of more than 25 awards, spanning four decades (and counting), he has worked with the brightest superstars of Philippine cinema, and also with the most award-winning filmmakers of this country.


He has been recognized as Best Cinematographer by award-giving bodies such as the FAMAS, Film Academy of the Philippines, Star Awards, Gawad Urian, MMFF, Young Critics Circle, among others.


Previous awardees of Ulirang Alagad ng Pelikula sa Likod ng Kamera (started by the PMPC in 2009) are Mother Lily Monteverde, Carlo Caparas, and Marilou Diaz-Abaya (when she was still alive in 2012, her son Marc Abaya received the award on her behalf).