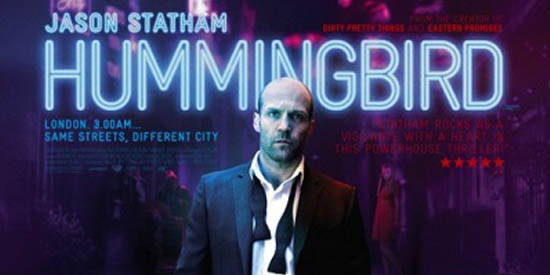 This is not your usual Jason Statham film.

Known for his anti-hero roles, in this Steven Night (his directorial debut) piece, his action stunts and scenes are a bit muted.

Yes, it has its share of punches, kicking ass, and cracking heads, but not as much as what Transporter, Death Race, Safe, and The Mechanic showed.

Most parts are rather slow-paced. But there are a few twists— and one of them even defied conventions.

The turning point for Joey is when he gets separated from his girlfriend one eventful night.

Making the decision to sober up, he assumes another man’s identity and lands a decent job.

But eventually— despite his special friendship with a nun, played by Agata Buzek— Joey gets involved in Chinatown’s illegal operations.

From here, see where his motivations— missing girlfriend, daughter who doesn't know him, and the homeless people— lead him.

Hummingbird has a promising premise and interesting sub-plots.

The hiccup, however, aside from the pace, is that there are a few characters yet so many issues/ struggles/ things going on.

It’s quite hard to absorb everything in one and a half hours.

But Steven Night is successful in showing that war robs men of the drive and sense of direction, and he's able to capture Jason's depth as an actor.

Jason Statham fans will be surely thrilled to see their action idol try his hand at drama, and portray a character that’s unpredictable, mysterious, intense, and in one scene, tearful.