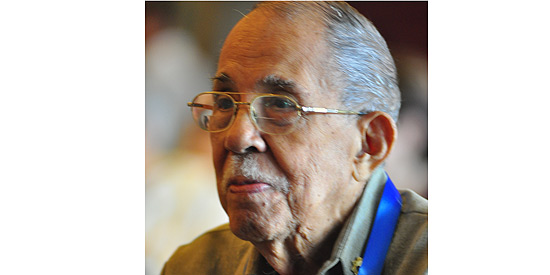 Colleagues of the late Eddie Romero bid farewell to the National Artist for Film through a necrological service held last Sunday, June 2.

The said ceremony took place at the Cultural Center of the Philippines hours before Romero's remains were laid to rest at the Libingan ng mga Bayani.

The veteran screenwriter, film director and producer passed away on May 28, 2013 at the age of 88.

He was best known for his films Ganito kami noon... Paano kayo ngayon?, Aguila, and the 13-part series Noli Me Tangere.

When Romero was conferred the National Artist Award in 2003, he was cited as a filmmaker “whose life is devoted to the art and commerce of cinema” and as an “ambitious yet practical artist” who “was not satisfied with dreaming up grand ideas.”

During the necrological rites, CCP President Raul Sunico gave this speech in honor of the late Eddie Romero:


"The Cultural Center of the Philippines would like to thank everyone for joining us this morning as we pay our last respects to the late National Artist for Film, Eddie Romero, who we all look up to for his exemplary works as a screenwriter, film director and producer.

"Romero’s early works during the post-war studio system and his adventure into American productions in the late 1950s through the early 1970s did not deter him from making his more ambitious films that contributed towards the renewal of Philippine cinema in the second half of the 1970s.

"His grand ideas were not constrained by the limitations of the local film industry. Ganito Kami Noon…Paano Kayo Ngayon?, set at the turn of the century during the revolution against the Spaniards and, later, the American colonizers, follows a naïve peasant through his leap of faith to become a member of an imagined community. Aguila situates a family’s story against the backdrop of the country’s history. Kamakalawa explores the folklore of prehistoric Philippines. Banta ng Kahapon, his “small” political film, is set against the turmoil of the late 1960s, tracing the connection of the underworld to the corrupt halls of politics. His 13-part series of Noli Me Tangere brings the national hero’s polemical novel to a new generation of viewers.

"Romero was described as an ambitious yet practical artist who was not satisfied with dreaming up grand ideas. He found ways to produce his dreams into films. His concepts, ironically, were delivered in an utterly simple style—minimalist, but never empty; always calculated, precise and functional, but never predictable. Through his long career that spanned three generations of filmmakers, Romero had produced, directed and written an exemplary body of work.

"Romero saw himself as a storyteller. His perception was that artists can do anything and that it's poor art to preach and sermonize. He showed people the characters and it's up to them to interpret them, according to Romero.

"Even after doing several films and screenplays to his credit, Romero didn't stop at what he loved doing all his life: writing. He recalled writing short stories as early as eight years old, and at 12, he wrote a short mystery story that was published in the Philippine Free Press.

"As a director, he megged Ang Kamay ng Diyos (Hand of God) in 1947 with Leopoldo Salcedo and Carmen Rosales. He went on to direct 14 films under Sampaguita Pictures. In the 1950s, he left the studio and started doing movies with the Americans.

"Then came the opportunity to direct Hari sa Hari, Lahi sa Lahi in 1987, the first co-production between the Philippines and the People's Republic of China. Romero saw it as an important film since Filipinos knew so little about the country’s cultural contact with China, according to him. The production of the P100-million movie, based on the friendship of two Asian kingdoms, the Philippines and China in the 14th century, was implemented through the Cultural Center of the Philippines (CCP) and the Beijing Film Studios, and had its world premiere in August 1987 at the Manila Film Center.

"Romero wanted to show what was happening then, on how to be a nation, and his other concern was with the Filipino, not the Filipino nation, Filipinos’ basic propensities and biases, as reflected in his films Ganito Kami Noon, Paano Kayo Ngayon, Aguila and Banta ng Kahapon.

"Aside from mainstream films, Romero also directed digital films, among them, Faces of Love in 2007 and Teach Me To Love in 2008. Incidentally, Teach Me To Love was premiered during the 2008 Cinemalaya Independent Film Festival held at the Cultural Center of the Philippines.

"We thank Eddie Romero for his immense love and passion in the film and broadcast genre. Truly, he embodies the quintessential Filipino filmmaker whose life was devoted to the art and commerce of cinema."