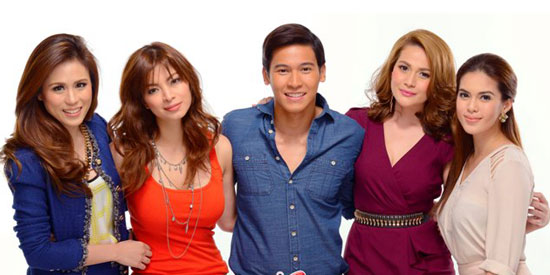 Four Sisters and a Wedding is about the Salazar sisters who are on a quest to halt the rush wedding of their youngest sibling CJ—played adorably by Enchong Dee.

The second sister, Bobbie, is played classily by Bea Alonzo. Bobbie is the New York-based corporate communications manager who is considered as the smart one in the family. Bea expertly succeeds in giving a hint of depth to the one-dimensional character she was provided with.

The third sister is Alex, the “black sheep” and carefree rebel among the siblings. The independent film assistant director is played convincingly by a slimmer and sexier Angel Locsin.

The fourth sister is Gabbie, the strict, stiff, young “old maid” in the family played maturely by Shaina Magdayao. Her one-note performance is understandable given the limited nuance made available to her character.

Though these four are the main cast, their performances are easily overpowered by the supporting roles played by the film’s veteran performers.

Carmi Martin easily steals the scene if not the whole movie from the lead stars. Her screen presence, not to mention her thick bangs and similarly thick—albeit forced—French accent make her hilariously unforgettable. The antics of her onscreen husband, played by Buboy Garovillo, are similarly zany. Both play the over-the-top rich parents of CJ’s fiancee, Princess, whom CJ has only known for three months.

Connie Reyes plays the mother of the siblings. Firm but gentle, she also shines in the movie thanks to her subdued performance.

Though the movie’s intention is to tell a heartwarming tale about families and how one should learn to appreciate each member of it, there are moments when this theme was presented too saccharinely sweet to be believable.

Fortunately, the plot was laid out effectively at the start of the movie making it easy for audience’s attention to be engaged effortlessly. But putting all the interesting points at the beginning caused a lull halfway through the film as the story struggled to keep the action moving via contrived conflicts and trying-hard-to-be-funny scenes.

There are also instances where the characters and how they were portrayed became almost cartoonish, albeit unintentionally. For instance, Toni Gonzaga seems content to rehash her Toni Gonzaga mannerisms that it became difficult to see her as her character Teddie.

The movie often crosses the line between being a dramatic movie and a laugh-out-loud comedy—with most of the laughs being provided by Princess’s family, including her dying grandfather.

Director Cathy Garcia Molina seems an expert in combining both genres without audiences getting confused by this mix. However, for the sake of consistency, it wouldn’t hurt the story if the movie made up its mind and decided to be more dramatic than funny, or vice versa.

Four Sisters and a Wedding is Star Cinema’s initial movie offering for its 20th anniversary. It is entertaining and easily likable. But the most memorable part of it—which garnered spontaneous applause during the film’s premiere night—was Carmi Martin’s Filipino-style French accent that makes this film a must-see.

This movie is currently being screened in cinemas nationwide.


Ed's Note: The "PEP Review" section carries the views of individual reviewers, and does not necessarily reflect the views of the PEP editorial