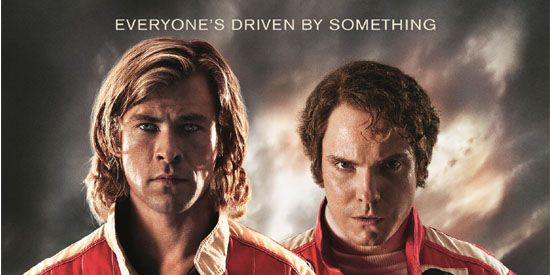 That’s how I would describe Rush, starring Chris Hemsworth and Daniel Brühl.

It showed a portion of Formula One’s action-packed landscape in the ‘70s— which was considered by the website suite101.com a “bleak” era because the sport claimed the lives of eight racing drivers, including world champion Jochen Rindt.

But the film Rush was far from dreary.

Thumbs up for Peter Morgan (Frost/ Nixon and The Queen), who did a good job in retelling one of F1’s greatest rivalries—that of James Hunt, a British racer who won the World Championship in 1976, and Niki Lauda, Austrian world champion in 1975, 1977, and 1984.

Loud cheers for Ron Howard (A Beautiful Mind and Apollo 13), whose Oscar-worthy direction reincarnated the vibrant personas of James—with his charm and devil-may-care attitude; and Niki—with his brilliance and bluntness.

The film wasn’t just a show of adrenaline-fueled racing and whizzing sequences around a track. It was also a spectacle of drama!

1) Lauda’s struggles while making a name for himself, and also, while recovering from his near-fatal accident;

2) Hunt’s depression prior to being signed up by the McLaren team, plus, his brief confrontation with ex-wife, model Suzy Miller, played by Olivia Wilde.

It was filled to the brim with witticisms, which did more than just underscoring the rivalry and the stark contrast between the two racers.

The lines—delivered so effortlessly by Hemsworth and Brühl—would certainly endear Hunt and Lauda even to the non-F1 fans.

You will enjoy the characters’ no-beating-around-the bush and sometimes-callous banters.

One scene had Lauda telling Hunt, “You English, you are such assholes…”

For Hunt’s part, aside from calling Lauda a “rat” because of his protruding teeth, he also regarded the latter’s life-changing decision with some degree of carelessness and sarcasm.

"Isn't that what we're here for? To stare death in the face and beat it? That's the nobility of it. It's like being knights."

Lastly, you will like both the simplicity and complexity of the story.

It was simply about the two rivals—no antagonists, no damsel in distress.

It was figuratively complicated—mixing fact and fiction, fusing drama into sports, and putting Hunt and Lauda on an equal footing.

Some film critics pointed out a few exaggerations:

1) Friendship of Hunt and Lauda off-track

3) Hunt opposing Lauda when the latter pushed for cancellation of the German Grand Prix.

But I found the scenes defensible because, in the first place, the script had to flag rivalry.

Plus, the film Rush made me appreciate the sport and its racers better.

Howard encapsulated the fun, the speed, the excitement, the drama, the danger, and the triumphs... bringing out the best in his actors.

He also juxtaposed the staged with archived footage so wonderfully.

Rush gave F1 a universal appeal, keeping me on the edge of my seat from start to finish.

In an interview, the director said, “This is a movie I wanted to see and a world I wanted to occupy and share with audiences…”

And I say, “thank you,” and, at the same time, wave my checkered flag for a job well done."

RUSH is distributed by Captive Cinema and will be in theaters starting September 18, 2013.