MOVIE REVIEW: The Guerilla is a Poet: A lyrical commentary on Jose Maria Sison's memory 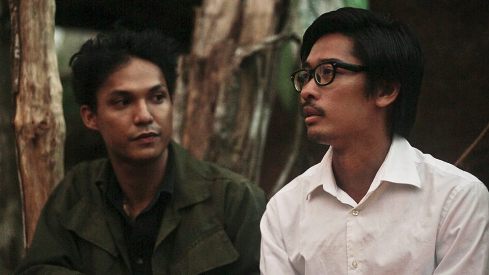 Karl Medina (right) brings quiet strength to his role as the young Jose Ma. Sison in The Guerilla is a Poet. He is joined in this photo by Anthony Falcon who plays Ka Dante, the Supreme Commander of the New People's Army (NPA).

It is fortuitous that the CineFilipino entry The Guerrilla is a Poet premieres on almost the same date as Martial Law was declared more than four decades ago.

Ferdinand Marcos announced on September 21, 1972 that Martial Law was in effect and on September 18, 2013 moviegoers were able to watch The Guerilla is a Poet.

Directors Sari and Kiri Dalena have translated a thoughtful script into a poetic film. The Guerilla is a Poet is not a documentary. At least, not entirely and not in the traditional sense, though it features interviews with Jose Maria Sison and his wife Julie de Lima in The Netherlands, and Bernabe “Ka Dante” Buscayno in the Philippines.

Jose Ma. Sison is the founding chairperson of the re-established Communist Party of the Philippines while Ka Dante was the Supreme Commander of the Maoist New People's Army (NPA).

The film opens with Joma and Julie at their apartment in Utrecht in winter, a quiet yet eerily lonely scene; it shifts to a joyous birthday celebration, as friends join Joma in celebrating his 74th birthday. He is asked the perfunctory: “What is your wish?” Instead of a succinct reply, the celebrant pauses… this signals the start of the flashback.

During her interview, Julie has trouble remembering the date of their wedding. Even after she confers with her husband, she cannot provide an answer. This also serves as a commentary on the film: that memory may not be precise with statistics but the spirit and the emotion behind the remembrances are real. And so, the film, by its very virtue of not being a reportage, does not purport to be a completely accurate rendering of the events of that time.

It is held together by relationships. A young Joma, though coming from a rich family owing vast tracts of land, empathizes with the plight of the masses. Though he struggles to explain his motives to his own mother, he finds a very supportive ally in his wife, Julie. 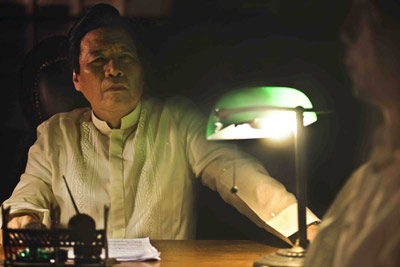 There are many themes that recur throughout the film. First, is that of walking, going up and down. Initially, present-day Joma Sison walking down a flight of stairs in a Dutch apartment building. Soon after, a much younger Joma with wife Julie, walking through muddy and rocky paths up mountain passes. Bare feet through soft mud, and all around, lush, green vegetation: wild terrain that can only happen naturally, as in the unexplored communities that are secluded and beyond reach of motorized vehicles.

Another visual theme is of Joma typing. He types poetry and strongly worded statements in various places: at his desk in his Utrecht apartment at 74, he types on a personal computer; at his home during the early years of his married life, he types on a typewriter, even oblivious of everything and everyone around him; in their tent in the mountains, his fingers keep on typing even as insects ("niknik") attack him all night.

Verses from the poem The Guerrilla is like a Poet are repeated throughout the film—signaling both poetry and revolution.

The storytelling, helped by the editing, is fluid. Yes, the lighting is soft and the camera work is thoughtful, yet the advocated armed struggle is clear, with the ever-present guns and artillery, even the training of young men and women not only in handling guns but also guerrilla tactics. Despite Mao Zedong’s persecution of artists, the Filipino people’s revolution did make use of songs to carry their messages—and what are songs but poetry set to music?

The cinematography is best utilized during the outdoor scenes in bright sunlight against a beautiful blue sky and the chiaroscuro during the latter part of the film, set in the city.


It is effective in the slow reveal of Joma’s interrogator, reminiscent of Marlon Brando’s style in Apocalypse Now. It is also very stirring in the separate scenes when Joma and Julie are in solitary confinement. The shadows communicate just how lonely and long the hours can be in that small space…and leave us, the audience, to imagine how it is to spend day after day for years in the same situation.

The film presents Joma not merely as a looming figurehead of the threat of communism but as a romantic, a poet, even a singer, and a man with a sense of humor.

The best scene to me is when the characters of Julie and Teresa have a heart-to-heart conversation about the uncertainty of the future for them not only as women, but wives and mothers. It is personal on one level, but also reflects on the national as well.

There are funny moments too, especially when Joma narrates how he would encourage pairings among the comrades, showing that love and resistance are not mutually exclusive.

Forget that Karl Medina has showbiz pedigree. He is the eldest son of Pen Medina and older brother to Ping and Alex Medina. He essays the role of the young Jose Ma. Sison with a quiet strength that boils just below the surface until it needs to brim over and explode—but still tempered. He holds his own against Willie Nepomuceno’s Ferdinand Marcos, in a sharp exchange—in Ilocano, at that!

Angeli Bayani plays thoughtful and tough with ease. She captures the intelligence and conviction of the real Julie (Joma's wife)—it helps that their features are very similar. 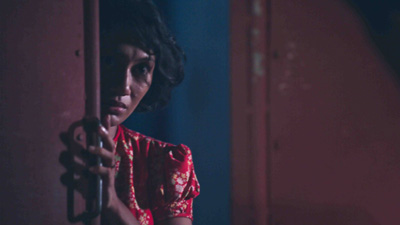 
Chanel Latorre is equal parts vulnerable and strong as Teresa, representative of beautiful society ladies who were convinced to join the cause.


Willie Nepomuceno avoids the pitfall of playing Ferdinand Marcos based on gestures and tone of voice, he inhabits the role and communicates not only the fallen dictator’s intelligence but also his neuroses.


Jao Mapa as Ninoy Aquino holds his own opposite Medina. However, he somehow lacks the dignity and conviction we have come to associate with the hero’s persona.

The film ends with a lyrical and visually stunning interpretation of the poem, with Karl Medina as Joma then transitioning to many nameless faces that recite the poem and are consequently given voice and a chance to participate.

The guerrilla is like a poet.
He moves with the green brown multitude
In bush burning with red flowers
That crown and hearten all
Swarming the terrain as a flood
Marching at last against the stronghold.

An endless movement of strength
Behold the protracted theme:
The people’s epic, the people’s war.

The younger generation may only be aware of Sison’s name and old photos—if at all.

The film does not seek to provide answers. Instead, it sets the wheels of our brains turning and turning…inquiring, wondering…the whos and whens, whys and hows.

Julie makes a very candid statement during her interview: “You know, unpleasant things, I tend to forget.”


Maybe this holds true for the collective memory of the Filipino people.


But documents and documentaries like these, supplemented by critical thinking, will help to keep our faltering and faulty memories alive. In that way, the men and women who have shaped our history may not be forgotten and the lessons of the past will be taken to heart.

Guerilla is a Poet is one of the entries in the 1st CineFilipino Film Festival, which runs until September 24, 2013. Moviegoers can watch at Newport Cinemas at Resorts World Manila, Lucky Chinatown Mall and Gateway Cineplex.


(To learn more about the CineFilipino entries, CLICK HERE)