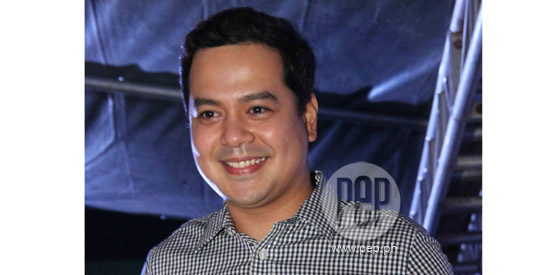 Despite inclement weather and traffic jams, fans came in full force to watch the free screening of It Takes a Man and a Woman at the first Cinema One Drive-In screening event last September 27, Friday, at the Greenfield District.

The rains had subsided by the time lead star John Lloyd Cruz arrived to thank his fans for supporting the third installment of the 'kilig' Laida-Miggy tandem.

He also complimented the organizers of the event: “More than watching the movie, I think it’s the experience of the drive-in cinema that the viewers came out for. I’m sure most, if not everyone here, has already seen the movie, yet, they still came to watch. Indeed, it’s a different experience."

Ronald Arguelles, channel head of Cinema One, said the Drive-In screening was conceptualized as part of the cable network’s lineup of outdoor movie screenings.

For John Lloyd, it was a good occasion to thank the fans for the support of the movie.

He said, "It’s quite a privilege that this movie that Sarah and I did was chosen to launch this drive-in screening event. But, after all, this franchise is the first romantic comedy in the history of Philippine cinema that reached a third installment.”

Asked whether he would once again like to work with Sarah on a movie project, John Lloyd quickly replied: “Yes, of course. But maybe the movie viewing public would like to see us play other roles away from the Miggy and Laida characters… something new and something different, ibang klaseng pelikula.”

But after less than a minute, he confessed: “But after we released this movie, Ma’am Charo [Santos-Concio of ABS-CBN] was insisting on a part four. So, we’ll see."

Cinema One Originals. Ronald said that Cinema One regularly holds outdoor screening events. He cited Boracay during the summer and upcoming in time for Halloween is the Tagalog-dubbed Mario Maurer horror-comedy Pee Mak.

He also mentioned the much-awaited Cinema One Originals Film Festival. This year, it will be held November 10-19 in three cinemas: Glorietta, Robinsons Galleria, and Trinoma.

From dramas to romantic comedies to action, the movies deal with a myriad of topics set in diverse places—Chinatown, Quiapo, Corregidor, a call center office, Nueva Vizcaya, Camotes Islands, and an upscale gated subdivision.

Of the new breed of filmmakers and fresh picks of stories, Ronald said: “Our films this year are really different, for those craving new things. Our tagline is ‘Wag kang pahuhuli’ because it’s all about being different, young, new, edgy… not for the ordinary.”