Jericho Rosales wins acting award in Guam; he will have Angel Locsin, Maja Salvador as co-stars in next project 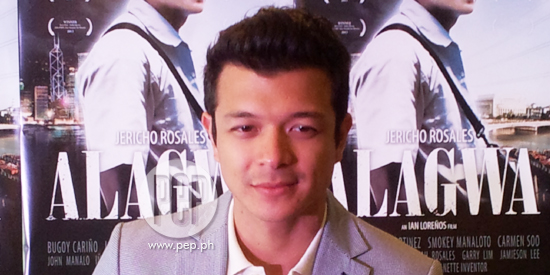 Aside from overseeing the commercial release of his movie Alagwa, Jericho Rosales will soon start taping an ABS-CBN soap opera together with Angel Locsin and Maja Salvador. "I love Angel and I love Maja. Maja is kalog, Angel is super bait. I think we’re gonna have fun shooting. Si JC [de Vera], hindi ko pa masyado nakakasama,” Jericho told PEP.ph when asked about his first impression of his new leading ladies.

Being second choice is not such a bad idea.

This is according to Jericho Rosales, who replaced Paulo Avelino in ABS-CBN’s upcoming teleserye, which also topbills Angel Locsin, Maja Salvador, and JC de Vera.

The actor was interviewed by PEP.ph (Philippine Entertainment Portal) and other reporters at a press conference for his movie, Alagwa, this Thursday, October 3.

He further shared instances wherein being a second choice worked out for the best.

“Before, I was supposed to do Piolo [Pascual]'s role for Dekada ‘70. I didn’t do it because I had Pangako Sa’yo.

“But look what happened to Piolo. He won best actor. Yung Pangako Sa’yo was shown in different countries.

“I think God is controlling the situation. ‘Ok that’s it. I have plans for this project. Let’s put this guy.’”

At this point, Jericho would rather be positive about the project than dwell on pointless issues.

“Ako ngayon, di ko alam kung anong history niyan. Basta they said, ‘Echo, we want you to do this role.’ And I said, ‘Let’s do it. It’s about time.’

“I’ve been asking for a project with Angel and then idinagdag, sa wish ko ha, na kasama si Maja.”

This marks the first time that he will be working with Angel, Maja, and new Kapamilya star JC de Vera.

The still-unnamed teleserye will reunite Jericho with the people he worked with in the award-winning drama soap, Pangako Sa’yo.

“Mag-start na kami. Naka-schedule ako for taping on October 18. First time ko to work with Angel, Maja and JC. I heard Bugoy [Cariño] is gonna be part of it. It’s a reunion project with my Pangako Sa’yo team—Direk Rory Quintos and our headwriter before, who's a director now, Dado Lomibao.”

YES TO LOVE SCENES. Jericho also said that he has no problem doing intimate scenes for a teleserye or a movie.

Apparently, some people are under the impression that he won’t agree to kissing scenes anymore since he’s already engaged to be married.

To this, Jericho replied, “Hindi totoo ‘yan. I would like to take this opportunity para klaruhin, ano.

“I’m an actor. Ang goal ko is to inspire people. If the story will inspire people and will have a positive effect on the viewers, okay ako diyan.

“Ok lang. Kasi, at the end of the film may redeeming value. Merong mapupulot yung mga tao. And that's how you inspire people.”

Others also believed that he has strict parameters when it comes to love scenes due to his religion.

“Wala. Me being a Christian means to serve God. Pero hindi yung use my body to entertain people. For me, it’s all about being a good actor and portraying a good role,” Jericho stressed.

MAJOR FEATS FOR ALAGWA. Jericho, who also serves as co-producer of the film, won the Outstanding Achievement in Acting award at the 3rd Guam International Film Festival. The said film fest was held from September 24-29, 2013.

Jericho added that when they did this film about human trafficking, they did not have awards in mind.

“It just gave me more hope to do more to achieve my dream. But, siyempre, masaya ako sa award,” he says happily.

“Thank you so much Ian Loreños for giving me the most meaningful movie role to date in my career. Congratulations to us and our entire ‘Alagwa’ team! We have great actors in our movie, as well as artists and crew with big hearts. We’ve taken the film around the world, and now it comes home to the Philippines. I can’t wait for all of you to see it—malapit na!”

TIME FOR LOVED ONES. Alagwa is close to Jericho’s heart because of the lessons he learned from it.

The movie tells the story of how a father goes in search of his missing nine-year-old son, who’s a victim of human trafficking.

“Kahit kumayod ka ng kumayod, hindi natin mapipigilan na tatanda at tatanda at magkakaproblema tayo. So, you might as well enjoy your time with your loved ones.”

Alagwa will be shown in SM Cinemas beginning October 9.