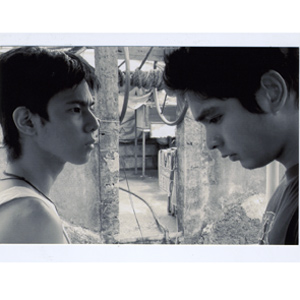 Jiro Manio (left) and his brother Billy's (Coco Martin, right) characters resort to crime in order to meet their own selfish needs. Tambolista is Adolf Alix, Jr.'s entry to the third annual Cinema One Originals Digital Film Festival, which will take place this November at the Trinoma Mall and Glorietta Mall.


A young boy desperately wants to own a set of drums, another young man needs money for the abortion of his girlfriend, and another fellow would kill just for the thrill of it—these are the characters who comprise Adolf Alix Jr.'s digital film Tambolista.

Accomplished in just 14 shooting days, this gritty film features the dilemma of a young boy named Jason (Jiro Manio) who desperately wants to own a set of drums. Taken from the root word tambol, the Tagalog word for drum, the film focuses on one boy's simple dream of owning a set of drums that costs P28,000.


Tambolista was written by Regina Tayag, which she created 10 years ago for the Film Development contest in 1995. As director Adolf read the script, he found that the story was very deep and dark. He only needed to update the story to include the use of cell phones and other minor details so that the setting would be in modern-day Manila.

Cinema One, ABS-CBN's 24-hour Tagalog movie channel, aims to produce films that are made by Filipinos to showcase local talent, creativity, and ingenuity. With this mission, Cinema One has become a venue for young and talented filmmakers to get their break in the industry. Now on its third year, the annual Cinema One Originals Digital Film Festival will feature five films that are in line with this year's theme, "Ang Kuwento ng Pinoy sa Buong Mundo."

Tackling the issues of poverty, guilt, and redemption, Tambolista is set in the slums of Manila and shot in various locations such as Quiapo and Recto. It captures the lives of three men struggling with deprivation and survival. Tambolista will prove that indeed "every beat counts" when it comes to pursuing one's passions and dreams in life.

SYNOPSIS. For 14-year-old Jason (Jiro Manio), nothing is more fulfilling than playing the drums. It is one thing he loves, and his passion—to play his own set of drums.

However, unlike the constant, regular beat of the drum, life is a series of disconnected parts, sometimes skipping a beat or going too fast.

His brother Billy (Coco Martin) discovers that his girlfriend is pregnant and needs to raise money for an abortion. Pablo (Sid Lucero), their buddy, is kicked out of the house, jobless and carries a secret of his own.

As Jason tries to help Billy raise the money, he is caught up in a web full of betrayal and violence. He may finally be able to get his drums but will it worth it?

Adolf Alix, Jr.'s Tambolista is one of the finalists of the 2007 Cinema One Originals that will be shown on November 30 to December at Trinoma Mall, Quezon City, and Glorietta 4 in Makati City.


The other finalists are Rico Ilarde of Altar, Jerrold Tarog of Confessional, and Lawrence Fajardo of Prinsesa. Co-directors Veronica Velasco and Pablo Biglang-awa collaborated for the entry Maling Akala.

The films were produced by Creative Programs Inc. (CPl), one of the subsidiaries of ABS-CBN. The 2007 Cinema One Originals project celebrates its third year with an awards night on December 1 at the Grand Ballroom of the Renaissance Hotel in Makati at 7 p.m.

Trailer courtesy of Cinema One