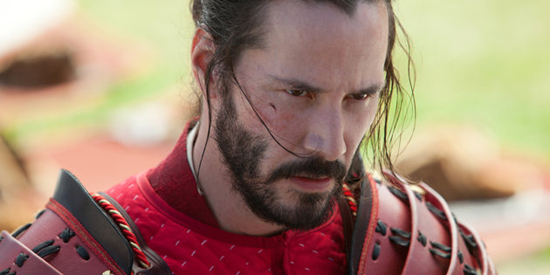 Despite production delays and issues, 47 Ronin is a visually stunning movie that captures the fascinating world of Japanese samurais. In the film, Keanu Reeves plays a half-British, half-Japanese man who uses his martial arts skills to avenge a death and save his beloved.

After two weeks of watching Tagalog flicks, courtesy of the annual Metro Manila Film Festival, it is very refreshing to see a samurai-themed movie on the big screen.

Universal Studios’ 47 Ronin brings to life one of Japan’s most beloved historical tales in a beautiful format that mixes ancient legend with modern movie fantasy. It depicts a fictionalized version of the real-life story of 47 leaderless samurai, who avenged the untimely and unjust death of their leader.

Directed by Carl Erik Rinsch, 47 Ronin stars Keanu Reeves as Kai, an orphan child believed to have been raised by demons. He was taken in and raised by Lord Asano (played by Japanese actor Min Tanaka), the samurai group’s fallen leader and ruler of the Ako territory in Japan.

Because of Kai's lineage—the movie suggests that he is part-Japanese, part-British, hence he is called the “half breed”—he is treated as a second-class citizen. However, his close ties with Lord Asano allowed him to develop a relationship with his master's only daughter Mika (played by singer-actress Kou Shibasaki).

A fateful visit from the ruler of Japan, Shogun Tsunayoshi (played by Cary-Hiroyuki Tagawa) and Lord Kira (played by Tadanobu Asano) leads to events that cause the death of Lord Asano.

It’s quite exciting to see how the rich, historical basis of the plot pans out with the addition of mythical witches and demons. Plus, the character Kai (which is nowhere to be found in the original Japanese legend) and his romance with Mika add another dimension to this tale of loyalty.

47 Ronin was originally set for a November 2012 release, but budget woes forced the studio to move the playdate to December 2013 in the United States. It seems that the tension between the director Rinsch and the producers have taken a bit of a toll on the final product.

Hollywood website TheWrap.com reported on September 2012 that Universal pulled out Rinsch from post-production due to excessive budget spending. It was said that the original $175 million ballooned to $225 million.

Judging from the fast-paced transition of the story, it seems like a lot of the story’s minute—yet, perhaps, helpful—details may have been edited out.

One example is the character of Savage (played by Rick Genest a.k.a. Rico the Zombie) who was quite prominent in trailers and other promotional materials of the movie. Somehow, Savage was rendered irrelevant to the entire plot, only getting a few seconds of screen time with very minimal dialogue.

What was he? Who was he? Why does he have all those markings on his body? (Actually, those are real tattoos on the actor’s skin.) Sadly, you won’t find the answers to those questions when you watch the movie. (Maybe we’ll see more of him when the DVD comes out months later?)

Another example—although this is actually one of the movie’s high points—is the scene where Kai reconnects with his demon origins. It’s a little baffling to listen to the conversation between Kai and his demon mentor, especially if you hadn’t absorbed the first few lines of the movie, where Kai’s background was briefly discussed.

Another flaw, though barely noticeable, is Kai and Mika’s love story, which seems to have been forced into the picture. Actually, it was, because no lovers were mentioned in the original legend of the 47 ronin.

The movie’s producers reportedly wanted to boost Keanu Reeves’ presence in the movie, so they added more scenes with Kai and Mika in the picture. We’re not complaining, though. It’s just that a lot more could have been done to the story to give Kai and Mika’s relationship a more solid foundation that viewers can root for.

To be honest, the dialogues and narrations are pretty raw that it takes the conviction out of the story. What the actors’ body language can perform is not exactly matched by the lines that they speak.

Despite these imperfections, 47 Ronin still proves to be a visually stunning movie that captures the fascinating world of Japanese samurais.

The cinematography is crisp, the colors are beautiful, and the sets and costumes all look wonderful. The actors are also stunning, especially the ageless Reeves and the poreless, wrinkle-free Japanese women (spell ENVY!).

It is recommended to see this movie in 3D.

Although it’s not as high-octane as other fantasy action films—which is understandable because this is, after all, a samurai movie—it’s exciting to watch the graceful movement of the characters in their sword-fighting scenes.

But, I must admit, I miss Keanu’s kung fu.

47 Ronin is distributed in the Philippines through Solar-UIP, and is showing in over 130 screens nationwide beginning January 8, 2014.

Get a chance to win a trip for two to Tokyo, Japan, to visit the grave of the original 47 ronin when you watch the movie. Simply purchase your tickets from SM Cinema and fill up the form found on apps.facebook.com/smcinema_promo/ to create your raffle entry. You may also double your chances of winning when you buy your tickets using e-PLUS Tap-to-Pay card or JCB credit card.