MOVIE REVIEW: Kim Chiu is a charming Bride for Rent 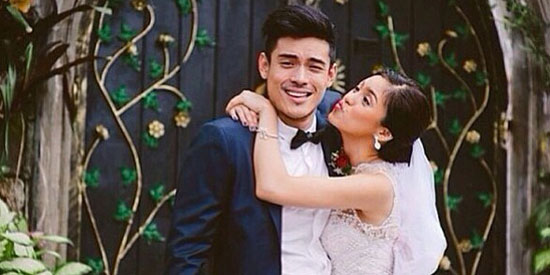 Kim Chiu shows a knack for portraying charming and funny rom-com characters while Xian Lim struggles to do drama in Bride for Rent.

Bride for Rent does not offer anything novel. The trailer alone says much about the film from its cliché characters down to its formulaic plot. It proves, however, that Star Cinema has become so good at producing feel-good, tummy-tickling chick flicks that never actually fail to disappoint an audience seeking light-hearted modern fairy tales.

The film’s optimistic and quirky heroine Raquilita Dela Cruz, a.k.a. Rocky (Kim Chiu), is a devoted daughter and sister who will do whatever it takes to provide for her impoverished family. Her love interest is a brash womanizer, the rich and winsome Rocco Espiritu (Xian Lim), who grows up sheltered and spoiled by his famous celebrity grandmother (Pilita Corrales).

The love story of the two begins when Rocky, desperately seeking a job to pay for her family’s rent, auditions for a “role”—Rocco’s pretend-wife.

Rocco, determined to acquire the trust fund his grandmother gave him as a gift on his 25th birthday, finds out that he cannot have the money unless he submits one crucial requirement first: a marriage contract.

Desperate because he needs to pay off a debt he incurred after foolishly drunk-gambling on the eve of his birthday (a detail reminiscent of The Hangover), Rocco hires Rocky.

Such is the premise that the film manages to relay to its audience during the first 10 minutes or so. By right away laying down the premise and introducing its cookie-cutter characters, it is able to efficiently indulge its audience in the meatier and more exciting portion of the story—when the characters develop feelings for each other.

The plot, already being so familiar and predictable to the audience, is narrated at a fast pace. But what’s interesting for viewers should be the twist of the story as well as the candid humor that the cast competently delivers for the most part of the film.

Directed by Mae Czarina Cruz, Bride for Rent is mainly laugh-out-loud and endearing. The movie’s lead actress, Kim Chiu, has certainly developed a knack for portraying charming and funny rom-com characters similar to those in Korean soap operas. The young actress is especially admirable in those touching scenes when she’s crying and longing for her family but still pulls off delivering the punch lines. One senses Xian Lim’s struggle in doing drama but it is apparent that the young actor tries his best.

Comedians Empoy Marquez, who plays Rocco’s sidekick, and Dennis Padilla, who portrays Rocky’s father, are both disarmingly funny. They alternate with Kim in providing humor that sustains the high energy of the film.

Meanwhile, Pilita Corrales dazzles as the grandmother of Rocco. In Bride for Rent, her character subtly but significantly creates the conflict. She paves the way for her unfeeling and non-committal grandson to change his ways. Luckily she meets the compassionate Rocky who executes her plans.

Bride for Rent, for all its side-splitting scenes and moving message on commitment and love, plays out like all rom-coms do. Fate brings together an unlikely pair (the guy always has commitment issues which the kind-hearted heroine will try to understand and change). They hate each other at first but are forced to make things work due to the circumstances they are in. They develop feelings for each other after seeing the good in one another. Eventually, after a while of denying and a lot of chasing, they end up together anyway.

Bride for Rent follows that exact sequence but convincingly churns out a downright cute and entertaining watch by utilizing an able cast and pure comedy.