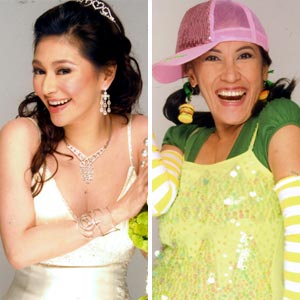 OctoArts' Films pre-Christmas offering this year is the horror-comedy Pasukob, a parody of contemporary Pinoy horror-suspense films. The Orly Ilacad-helmed production outfit has created a film that will not only tickle funny bones but also spoof horrific moments that have shocked Filipino viewers in the past.

This movie was supposed to be part of the Metro Manila Film Festival but as luck would have it, the producers will show it in theaters nationwide starting November 28, 2007.

Directed by Wenn Deramas, Pasukob stars Ai-Ai delas Alas and Rufa Mae Quinto as two sisters who become separated from each other. They meet again and come to realize that their weddings have overlapped, or in the vernacular "sukob." This superstitious belief dictates that siblings should not get married within the same year, or else misfortune will befall them. Apparently, a double wedding spells bad luck for one of the couples because it's just too much happiness for evil demons to overlook.


In Pasukob, the sisters Julia Rose (Ai-Ai) and Jenny Rose (Rufa Mae) lead lives that are completely opposite. Julia is often unlucky in love since her previous three husbands died the moment she gave birth. She has resigned herself to singlehood but then she meets Arthur (Antonio Aquitania). Convinced of Arthur's passion, Julia decides to give love another chance.


Jenny Rose (Rufa Mae), on the other hand, leads a charmed life. She is preparing her upcoming wedding to boyfriend Dino (DJ Durano). Jenny has always been favored by the gods and when she crosses paths with long-lost sister Julia, she suddenly realizes why Lady Luck continually smiles upon her.

As soon find out that they share a common past, they find ways to prevent them from meeting a horrifying future.

When asked to describe scenes from Sukob that he spoofed in this comedy flick, Direk Wenn Deramas narrated: "First is the wedding scene where a death occurs in the kampanaryo. We shot it in the belltower of the old church in Nagcarlan, Laguna.

"Then there's the ending where one of the sisters had to make a sacrifice to save the other. In Sukob, parehong handang magsakripisyo sina Kris Aquino at Claudine Barretto for the sake of each other. Dito, sina Ai-Ai at Peachy [Rufa Mae's nickname], nagtuturuan kung sino ang dapat magsakripisyo dahil pareho silang ayaw mamatay."