Carla Abellana-Tom Rodriguez starrer, So It’s You, graded A by Cinema Evaluation Board 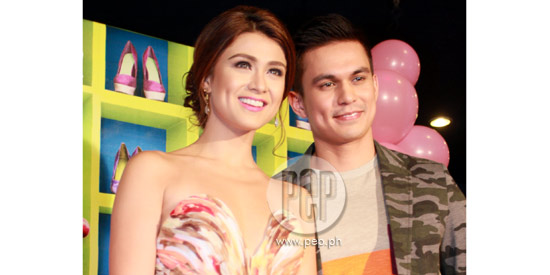 Carla Abellana and Tom Rodriguez both assure moviegoers that So It’s You is worth watching.

In a short interview with the two Kapuso stars during the premiere last Monday, May 5, they both expressed how proud they are of their first movie together.


In So It’s You, Carla's character is still not over her ex-boyfriend (played by JC de Vera). In an attempt to make him jealous, she asks Tom's character to pretend to be her boyfriend and they shoot sweet moments together that she can share on social media.

Tom added, “Actually, it’s good talaga. We can be proud of it.”

When asked what viewers can expect from So It’s You, Tom immediately replied, “Sangkaterbang kilig!”

Meanwhile, the former My Husband’s Lover actors were happy to see that viewers continue to appreciate their chemistry onscreen.

“Compliment ‘yon, siyempre, for seeing that in us,” Carla said.

“At least, fulfilling ‘yon to us, not just as actors but also as individuals.

Both actors think that So It’s You will not be the last time they will be working together.

Tom said he and Carla will definitely see each other again even after completing this movie.

“I don’t think that’s something that needs to be promised.

GRADE-A MOVIE. Produced by Regal Films, the romantic comedy So It’s You received a grade of A from the Cinema Evaluation Board.


“This just in: ‘So It’s You’ has been graded A by the [CEB],” revealed director Jun Lana on his Facebook account yesterday, May 6, a day after the movie's premiere at SM Megamall.


As a result, the producer is entitled to a 100 percent rebate on amusement taxes.