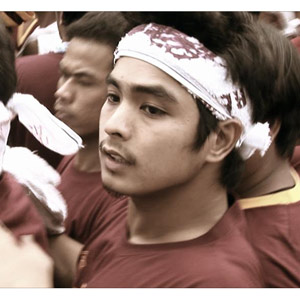 Tirador (international title: Slingshot) held its Philippine gala premiere at the University of the Philippines Film Institute last December 3. Coco Martin (in photo) plays a character who becomes desperate for money to pay for the pedicab that he uses for work.

To officially open the Cine Veritas Human Rights Festival advocating for human dignity and rights last December 3, the indie film Tirador was screened for the first time in the country at the University of the Philippines Film Institute. Directed by Brillante "Dante" Mendoza, Tirador (international title: Slingshot) takes a glimpse into the lives of small-time crooks that operate in the Quiapo area of Manila during the Holy Week and during the elections.

Direk Dante's sixth feature film is the Philippine entry for the Etoile D'Or (Golden Star) award, the top prize of the 7th Marrakesh Film Festival in Morocco. It is also nominated for the Jury Prize as well as the Best Actor and Best Actress awards.


The 7th Marrakesh Film Festival, which runs until December 15, will feature a total of 110 films. The president of the festival's jury will be Milos Forman, the Czech-born director who has won Oscars for his films Amadeus and One Flew Over the Cuckoo's Nest.

NON-LINEAR FILM. What's ironic about Quiapo is that it is the location of the Basilica Minore del Cristo Nazareno but it is also a hotspot for criminal activity. Direk Dante illustrates this irony through his film Tirador, which is named after the street slang for "thief."


Filipinos are known for being pious Catholics and thieves use this to their advantage by working "overtime" during religious activities. In fact, one of the highlights of the film is the sequence involving the Feast of the Black Nazarene, which is celebrated on January 9. Thousands of devotees troop to Quiapo to participate in the procession while carrying the life-sized, dark-skinned statue of Jesus Christ. Catholics believe that if they touch the statue or rub towels on the image, they will receive a miracle.

How does one go about depicting the cruelty and harsh reality of life in Manila's squatters' areas? Tirador opens with a scene that forces audiences to focus on the screen: it is the dead of the night and a bright light moves in and out of the dark alleyways. A police raid (called a "sona" by local residents) is occurring, and the audience is made to feel like they are voyeurs as the camera moves quickly into the squatters' area. There are curses being shouted, nervous exchange of information, scantily dressed couples copulating (frontal nudity included), and all the males are forced out of their homes so that the police can identify those included in their most wanted list.


As the film develops, the viewer realizes that the film is non-linear. Tirador depicts the chaotic life of urban living—the constant shouting of squatter dwellers, the din of street life, and the modus operandi of small-time crooks. The main characters have their own problems to deal with: Coco's character has to raise money to pay the owner of the pedicab that he is using; Kristofer's character needs money to feed his child; Jiro's character is orphaned and is expected to follow in the criminal footsteps of his father; and Nathan's character gets caught while attempting to claim the bag of a student inside a mall.

Swindling, stealing, drug use, vote buying, and various illegal activities are all shown onscreen, leaving the viewer to understand things for himself and digest the film with his own set of "street-smarts." Tirador is a film about the very things we fear when we are out on the streets: drug pushing, thievery, professional snatching, swindling, sex and prostitution, extortion, and peddling of stolen goods.


Watching Tirador is a painful eye-opener about the lives of petty criminals. Life on the streets of urban Manila is captured just the way it is. You can almost smell the sweat, feel the tension of being bludgeoned by the police, hear the cussing of gangs, and feel an odd sense of compassion for a woman who works hard at stealing to get herself a pair of dentures. Her statement is as funny as it is ironic: "Pinaghirapan kong nakawin ‘yan."


The camera movements are jerky and there are times when the outdoor scenes appear too washed-out—especially the fight scene between Coco Martin and Julio Diaz.

You won't look at Quiapo the same way again after seeing it through the film Tirador.